‘Resistance is female’: Gaza women protest for their right of return

September 11, 2018February 23, 2021 by milena rampoldi
Hundreds of Palestinian women and girls gathered on Tuesday near the eastern fence separating the coastal enclave from Israel, in what the organisers called the “Palestinian Women for the Return and Breaking the Siege” protest.
In a press conference held in Gaza on Monday, the Higher National Commission of the Great March of Return and Breaking the Siege called on Palestinian women to “widely participate in the protest” and call for their right of return.
“This event comes to support the Palestinian women who are still steadfast despite the siege. It holds a clear message: that no one can deny our rights, especially the right of return and our demands to lift the siege,” said Iktimal Hamad, the chairwoman of the commission’s women’s committee.
Mothers, wives, daughters and sisters of those killed and injured during the Great March of Return protests, as well as female journalists and university students, held Palestinian flags and signs calling for the right of return and affirmed their willingness to keep the protests alive.
“Who said women cannot fight just as effectively as men?” exclaimed Suheir Khader, 39, who came to the gathering with her family and friends.
“We were brought up with the fact that resistance is female. Our grandmothers always assisted our grandfathers and fought along with them during the Nakba (the Catastrophe) and the first Intifada. 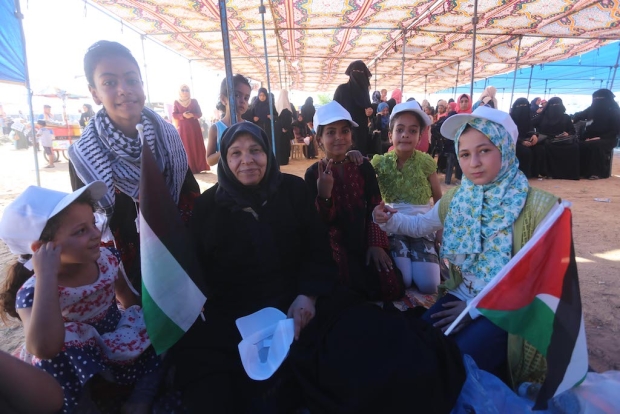 Palestinian women and children protest in Gaza (MEE/Mohammed Asad)
“I am here today because we [women] cannot just sit there and watch our fathers and husbands being killed and injured. It is our duty to at least share this struggle with them,” added Khader.
Women injured during the Great March of Return protests also participated in Tuesday’s protest, calling for their right to medical treatment and demanding the right of return.
Amani al-Najjar, 25, said that nothing would prevent her from attending the protests, “not even my injury”.
“I got injured with a tear gas canister to the chest during the third week of the protests,” she explained. “Three days later, after I started recovering, I came back here to protest again.”
Najjar, whose brother was killed by an Israeli sniper while participating in protests near the eastern fence last year, said: “I am here to continue what my brother started. If they [Israeli soldiers] killed him to intimidate us and force us to stop, they are wrong. They just gave us another reason to continue.”
Palestinian women do not only raise freedom fighters, but have also fought along with them and protected them against the occupation for several decades
– Israa Areer, journalist
The Great March of Return protests kicked off on 30 March and have continued for the fourth month in a row, to demand Palestinians’ right of return and an end to the Israeli blockade on Gaza.
According to Ashraf al-Qidra, spokesman for the Palestinian Ministry of Health in Gaza, 134 Palestinians, including 16 children and one woman, have been killed, and 15,200 others, including 2,536 children and 1,160 women, have been injured since the protests began.
Um Khaled Loulo, 71, said she has been attending the protests at least once a week with her sons and grandchildren. “I always bring my grandchildren here to teach them about the right of return practically,” she told MEE.
“I do not let them approach the fence because I know Israeli soldiers will spare no effort to shoot them, but at least they get to understand that returning to their original homeland is something to fight for when they grow up.”
Loulo added that bringing her grandchildren to the protests is part of teaching them basic life values, and raising them to defend their rights.
“I bring them here every week and we start chanting national songs. This is how you raise a child under occupation.”
Loulo said she used to participate in protests and throw stones at Israeli soldiers when she was younger.
“The woman is equal to the man at home and on the front lines. If he is fighting for a cause, so does she,” she added. 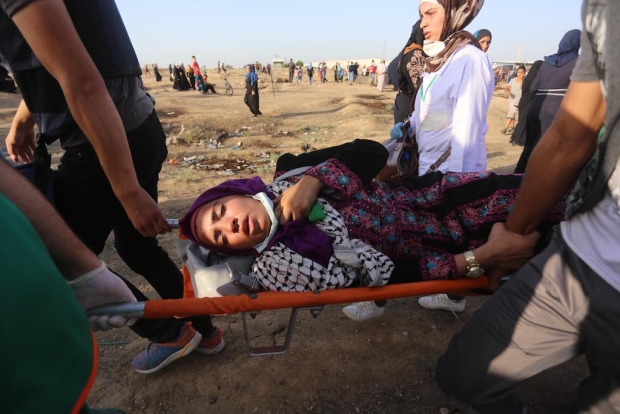 A wounded Palestinian protester is carried on a stretcher (MEE/Mohammed Asad)
Israa Areer, a 26-year-old journalist, thinks that the participation of women in the Palestinian struggle is “nothing new”.
“More than 60 years ago, my grandmother kicked the Israeli soldiers outside her home when they tried to detain her husband and children. This, too, is a form of resistance.”
Areer said although the Israeli authorities disengaged from the Gaza Strip in 2005, they are directly “affecting and controlling Palestinian women’s lives”.
“Although Gaza is not occupied, the Israeli authorities are still practising all forms of oppression against women by imposing a severe blockade that deprives them of their basic rights,” she added.
“Palestinian women do not only raise freedom fighters, but have also fought along with them and protected them against the occupation for several decades,” she said.