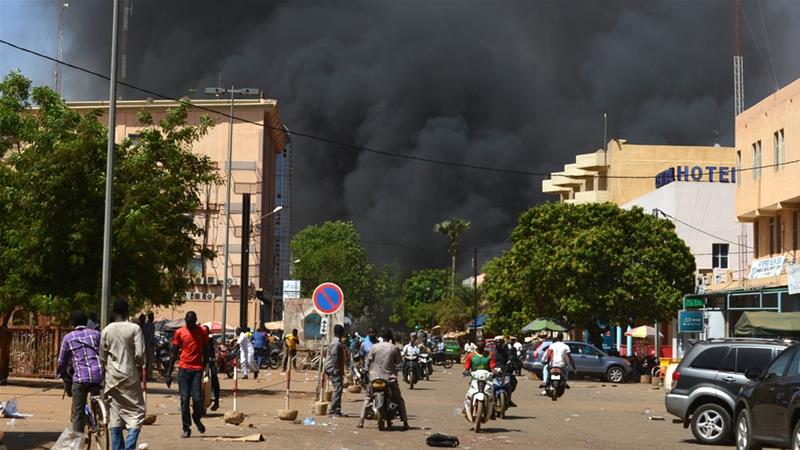 Burkino
Faso’s national police force confirmed attacks are taking place near the prime
minister’s office and the UN roundabout [Ahmed Ouoba/AFP]
Multiple
attacks have been reported in Ouagadougou, the capital of Western African
country of Burkina Faso, officials say.
The
national police force confirmed on Friday that attacks are taking place in an
area near the prime minister’s office and the United Nations roundabout.
The
police said in a statement that attacks are ongoing, though it’s unclear if the
information is up to date.
A
government statement said four attackers had been killed by security forces,
adding that operations are ongoing in the area.
Authorities
advised residents to stay away from the area.
French
media confirmed that the French embassy was also attacked. An official then
said the buildings are no longer in danger.
Earlier
in the day, there were reports of an explosion and gunfire near the
national army headquarters, not far from the French Institute.
Photos
online show a large cloud of black smoke in the downtown area.
It
was not immediately clear what caused the blast, though a witness at the scene
told Reuters news agency masked gunmen attacked guards at the military
headquarters following the explosion.

The
office of Burkina Faso’s prime minister said in a statement on Facebook that
the first ministry building was not attacked, adding there had been no
casualties and “no impact”.

Jean-Marc
Chataigner, France’s ambassador to the Sahel, called the incident a
“terrorist attack” on Twitter.
“Solidarity
with colleagues and friends in Burkina Faso,” Chataigner added.
The
US embassy in the capital also tweeted that people should avoid downtown
Ouagadougou and “seek secure shelter”.
Burkina
Faso is one of a number of countries in the Sahel – an area traversing Central
and West Africa – battling armed groups in the region.
Last
month, the European Union announced it would double its funding for the G5 Sahel
military force, which aims at combatting armed groups across the region.
The
force is made up of soldiers from Burkina Faso, Mauritania, Mali, Niger and Chad.
In
2015, Burkina Faso’s elite presidential guards (RSP) attempted to overthrow
ex-President Michel Kafando.
The
trial of 84 individuals allegedly involved in the failed coup began earlier
this week but was suspended until further notice after defence lawyers walked
out of court just hours after the hearing started.