by Ellen Wulfhorst, Thomas Reuters Foundation, News Trust, 25 April 2017.
“They cast a much wider net, and there
are perhaps an unlimited number of potential victims out there.” 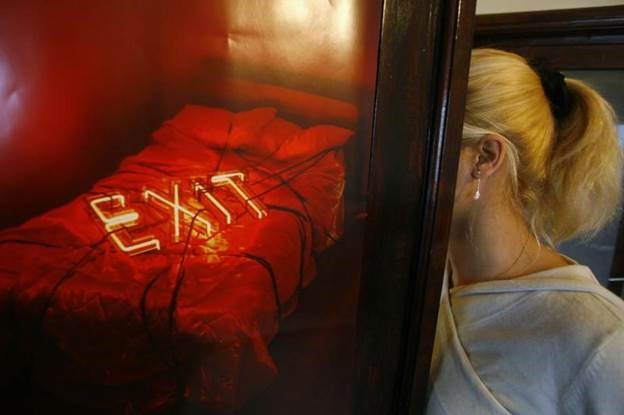 In this archive photo a former Romanian sex
slave hides her face behind a poster in Bucharest. REUTERS/Bogdan Cristel
WASHINGTON, April 25 (Thomson Reuters
Foundation) – Sex traffickers are growing increasingly adept at using
sophisticated technological advances to exploit children, especially tools to
hide their identity and encrypt data, according to a top FBI specialist.
Websites, chat rooms and virtual currency
all are used by traffickers to hunt for victims and sell them, said Kevin
Gutfleish, a specialist in violent crimes against children – including sex trafficking
– at the Federal Bureau of Investigation (FBI).
“They are keeping up with technology
and exploiting it for their purposes, their illegal businesses,” Gutfleish
told the Thomson Reuters Foundation. “They’re not opposed to using what’s
available to them.”
Traffickers who once recruited victims in
person now can use websites, apps, chat rooms and online groups, he said.
“They cast a much wider net, and there
are perhaps an unlimited number of potential victims out there,” said
Gutfleish, a speaker on Tuesday at Trust Conference/America Forum, a one-day
Thomson Reuters Foundation event on the fight against slavery and trafficking.
Traffickers use online means to advertise,
Global Positioning Systems in cell phones to track their victims and encrypted messages
to communicate with accomplices, he said.
Tech giants Apple and Google have come under
scrutiny after changing their operating systems in 2014 to encrypt users’ data
by default which boosted privacy online but made it harder for law enforcement
agencies to get information off smartphones.
Facebook-owned messaging system WhatsApp
last year turned on end-to-end encryption so only the person sending the
message and the person receiving the message can see what is sent.
This has pitted human rights advocates
welcoming increased online privacy against authorities voicing concerns that
encryption technologies can endanger the public by blocking access to
information between traffickers or other criminals.
A survey of more than 1,000 law enforcement
officers conducted for the Department of Justice last year found more than a
third said the technical sophistication and expertise of sex traffickers had
increased in the last five years, Gutfleish said.
In particular, they reported seeing an
increase in the use of tools and services that protect identities such as proxy
servers that can mask the source of communication.
“Sex traffickers are readily taking
advantage of those technologies that are available to them,” he said.
“You have a lot to lose when you’re exploiting
children.”
He said the FBI was keeping pace with the
misuse of new technology but also trying to benefit from this technology.
Gutfleish said the number of children being
sex trafficked in the United States was difficult to determine.
A concerted effort by several hundred
federal, state and local law enforcement agencies last fall turned up 82 sex
trafficking victims and 239 offenders in four days, he said.
“What we do know is that this is a very
pervasive crime all across the United States. If you look for it, you will find
it,” he said.