February 17, 2017February 23, 2021 by admin
by Juan Cole
February 16, 2017
The Trump-Netanyahu Show on Wednesday was par for the course in American and right wing Israeli discourse about the Palestinians.
Nobody brought up that the British colonialists conquered Palestine during World War I and instead of preparing it for statehood, as they promised the League of Nations they would do, they set the Palestinians up for destruction as a people. These actions contrast with Iraq, e.g., which the British did bequeath to the Iraqi nation.
No one brought up that 60% of Palestinian families were kicked out of their homes in 1948 by militant European Jewish colonialists brought there by colonial Britain, and that these families are still homeless and stateless whereas the Israeli perpetrators have never paid a dime in reparations for the billions of dollars worth of property they stole from the Palestinian people.
No one brought up that Europeans who committed the Holocaust have not borne the cost of that monstrous crime against humanity but rather the innocent Palestinians have.
The fact is that by about 1300 AD there were virtually no Jews in Palestine. And yes, there was a Palestine– a recognized geographical concept, coins with “Filistin” written on them, diaries of Palestinian travelers who said they missed ‘Palestine;’ and a distinctive Palestinian dialect of Arabic. The people who lived there were almost all Christians and Muslims, 1300-1850. My recollection is that the French found about 3,000 Jews there in 1799 when Bonaparte invaded, when the general population must have been around 200,000. 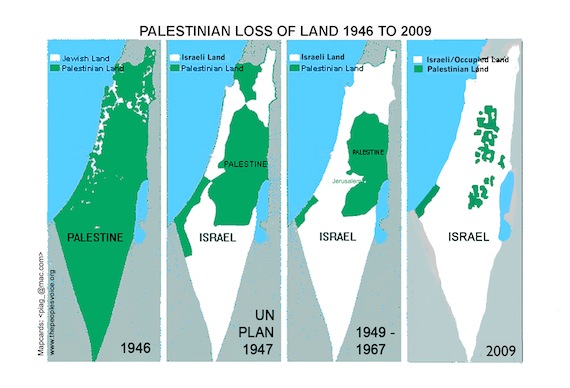