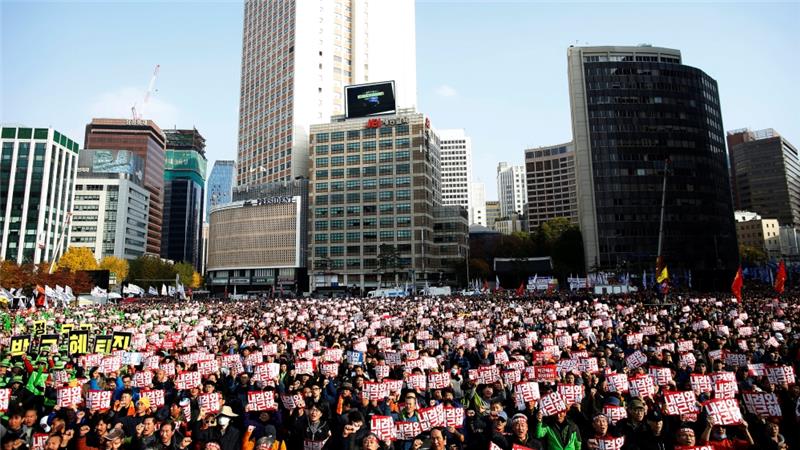 Organisers expect a million people to participate in Saturday’s rally [Reuters]
Hundreds of thousands of South Koreans have taken to the streets of Seoul to demand the resignation of scandal-hit President Park Geun-hye, in one of the largest anti-government protests in decades.

On the back of official appeals for calm, police deployed around 25,000 officers on Saturday for the third instalment in a series of weekly mass demonstrations in the South Korean capital that have left Park fighting for her political life.

In an effort to soothe public anger, Park has issued several apologies, reshuffled her top officials, and even agreed to relinquish some of her extensive executive powers, but the popular calls for her to step down have been relentless.

“We are feeling the weight of the serious public mood,” presidential spokesman Jung Youn-Kuk acknowledged on Friday.

The scandal engulfing Park is focused on a close personal friend, Choi Soon-sil, who is currently under arrest on charges of fraud and abuse of power.

Prosecutors are investigating allegations that Choi, 60, leveraged her personal relationship with the president to coerce donations from large companies like Samsung to nonprofit foundations which she set up and used for personal gain.

She is also accused of interfering in government affairs, despite holding no official position.

Lurid reports of the unhealthy influence Choi wielded over Park have sent the president’s approval ratings plunging to record lows.

Police said they had planned for a crowd of around 170,000 for Saturday’s demonstration, while organisers said they expected “between 500,000 and one million” to turn out.

Tens of thousands arrived in Seoul by buses and trains from provincial cities around the country. One group of 1,000 protesters flew in from the popular southern resort island of Jeju.

Such numbers make it one of the biggest anti-government rallies since the pro-democracy protests of the 1980s.

“The organisers were talking about a million people coming to the streets of Seoul today,” Al Jazeera’s Harry Fawcett said, reporting from the capital. “It’s impossible to estimate at this point, but it is an enormous protest and very well-organised.”

A protest in June 2008 against then-president Lee Myung-bak’s decision to lift an import ban on US beef drew 80,000 people according to police, while organisers claimed 700,000. 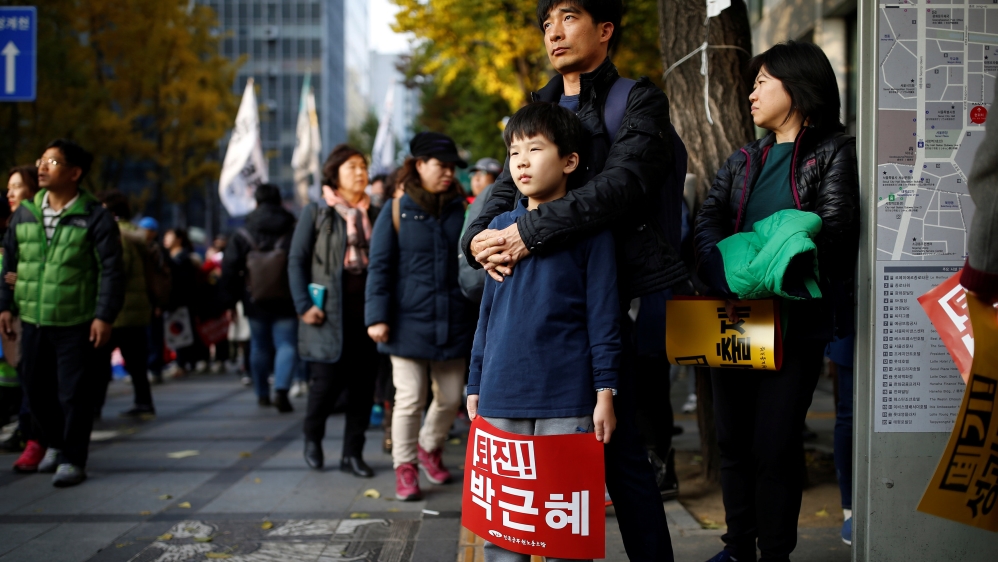 In an effort to soothe public anger, Park has issued several apologies and even reshuffled her top officials [Reuters]
In a televised press conference on Friday, Deputy Prime Minister Lee Joon-sik voiced concerns at the possibility of “illegal collective action or violence”.

“We hope the public will cooperate so that the demonstration will be legal and peaceful,” Lee said.

The two previous rallies were largely peaceful, with a large number of families attending, including couples with infants and young children.

Although opposition lawmakers said they would attend Saturday’s protest, they have largely avoided direct resignation calls and appear more interested in extracting more concessions from Park in terms of devolving power to the legislature.

“Among people in their 20s, Park’s support is down near zero percent in the latest Gallup poll, but [the opposition] aren’t really sure what to do with it because if they do drive her from office, there isn’t really a unifying figure on the left of politics to take up the mantle of the presidency right now,” said Al Jazeera’s Fawcett.

The candlelight rally was scheduled to begin at 4pm local time (07:00 GMT) at Seoul City Hall, followed by a march in the direction of the presidential Blue House.

Police plan to erect roadblocks to keep the crowds well away from Park’s official residence, and organisers said they would respect police boundaries.

Inside Story – Will South Korea’s president be forced out of office?
Source: Al Jazeera News And Agencies