please read this article written by Levy about APARTHEID in the occupied territories and send us your opinions to:
info@promosaik.com

As in European coloniast times, for Israel DEMOCRACY is not a good for export…

so what is the real situation in the occupied territories?

it is the APARTHEID….
The same apartheid NELSON MANDELA fought in South Africa, and he won

it is the same APARTHEID….

we had it in Nazi Germany, where the Jews had to carry around a YELLOW STAR….

it is the same APARTHEID existing all over the world.. when people do not understand that we have the same human dignity, and the exactly same human rights.

The editorial team of ProMosaik e.V.

But let us read Gideon Levy, the hero of the day, writing on Haaretz:

No, Israel is not an apartheid state, but for nearly 50 years an
apartheid regime has ruled its occupied territories. Those who want to
continue to live a lie, to repress and to deny are invited to visit
Hebron. No honest, decent person could return without admitting the
existence of apartheid. Those who fear that politically incorrect word
have only to walk for a few minutes down Shuhada Street, with its
segregated road and sidewalks, and their fear of using the forbidden
word will vanish without a trace. 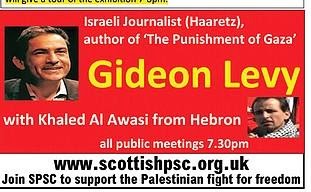