Another article about JEWS who do not want this war — and ProMosaik e.V. is with them

again Jews protest and say NO to the war against Gaza.
They stand up and say NO to violence,
NO to apartheid in the occupied territories,
NO to occupation,
NO to Israel’s politics….

We of ProMosaik e.V. deeply thank them for their initiative and want to tell them

AND STOP THE WAR

The Editorial Team of ProMosaik e.V.

Here you can read a very nice article published on The Dialy Jewish Forward:

‘We Won’t Stand Idly By’ as Palestinians Die 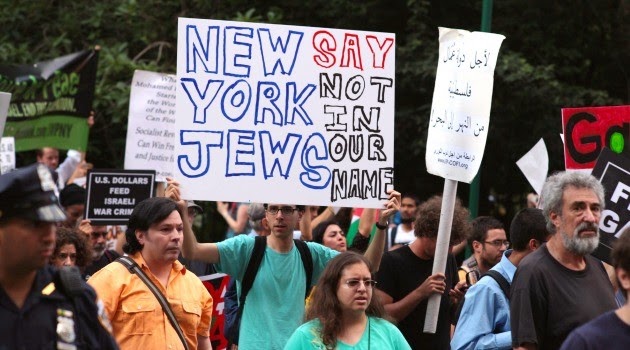 Holding signs emblazoned with slogans like “Boycott Israeli
Apartheid” and “New York Jews Say: Not in Our Name,” hundreds of
protesters marched through lower Manhattan on Thursday demanding an end
to American support for Israel’s operation in Gaza.
The event was one of many held in the U.S. and around the world as part of a “national day of action”
against Israel’s Gaza campaign. Two Jewish groups, Jewish Voices for
Peace and Jews Say No!, were among the march’s organizers, and numerous
Jews came to protest Israel’s military campaign. 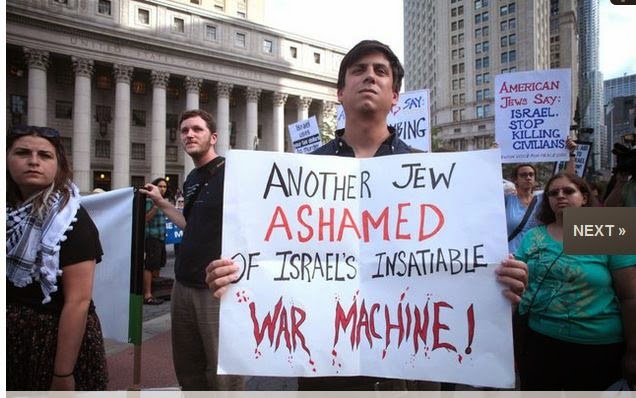 “I’m here because of the massacre that has recently happened, but
also because of the ongoing occupation,” said Anna Jacobs, who was
pushing her toddler in a stroller.
Standing nearby, Jews Say No! activist Dorothy
Zellner lamented that outsiders assume the Jewish community uniformly
supports Israel. “This is heartbreaking. Everyone thinks Israel
represents us and speaks for us,” she said.
“I think there’s a myth that the Jewish community
supports the Israeli attack on Gaza,” she added, and asserted that there
are “hundreds of thousands” of Jews in the U.S. that oppose the Israeli
occupation.
Most of the Jewish protesters interviewed opposed
Israeli policies long before the current campaign. But they view the
current hostilities as deplorable, or even criminal.
“It’s with our weapons, and our funding, and we’re
complicit in war crimes,” said Jenny Heinz, a Jewish senior citizen
wearing a keffiyah. “My parents escaped from [Nazi] Germany. ‘Never
again’ was always understood by me to mean never again for anyone.”
Zellner, who said she organized for civil rights in
the 1960s, feels compelled to by Jewish values to protest the Gaza
operation.
“Speaking as a Jew, this is a shonde. We’re
driven by our tradition that says, ‘you shall not stand idly by,’ and we
won’t stand idly by,” she said. “I was shot at and arrested for
principles of equal rights. I want a state where Israelis and
Palestinians are safe [with] equal rights for all.”
Israel says the Gaza operation is necessary to
address dangerous rocket fire from Gaza militants, which threatens the
lives of innocent Israeli civilians. But protesters asked about this
justification brushed it aside. “We don’t buy it,” Zellner said. “This
is blaming the victim to the extreme.”
Protest organizers specifically called for an end to
U.S. support for Israel’s military operation and its occupation more
generally.
“It’s a shame that our Congress, our media, and — as a
Jew — our U.S. Jewish institutions are largely silent, if not
supportive [of the operation],” said Brandon Davis, a 23-year-old
volunteer with Jewish Voices for Peace. “We’re hoping to change the
political discourse that is shamefully and uniformly pro-Israel.”
While being interviewed, a pro-Israel passerby began
arguing with Davis and called him “a self-hating Jew.” Only a handful of
Israel supporters showed up to counter-protest, however.
Misha Shulman, a 37-year-old Israeli immigrant, had
an unplanned protest of his own. The former IDF soldier strongly opposes
Israel’s Gaza operation and joined the march against it. He said he is
“pretty horrified” by the war and the number of Palestinian civilians
being killed.
But after a few minutes of marching, he no longer
felt comfortable. “They’re calling [the operation] a genocide,” he said,
and noted that the marchers also shouted slogans in favor of boycotting
Israel. “It’s essentially an anti-Israel protest, and I’m not
anti-Israel in general, I just oppose most of the government’s
policies.”
After glimpsing a sign that read “Israel=KKK,”
Shulman had had enough; he departed the line of marchers and sat down on
a park bench.
“At Israeli protests, we chant “Jews and Arabs refuse
to be enemies,” he said. “I hoped that I would find my part of the
demonstration [where] that’s the general sentiment.”