November 30, 2018February 23, 2021 by milena rampoldi
On November 16, 2018, in a decision with potential implications for survivors around the world, the Inter-American Court of Human Rights ruled that the State of Venezuela is responsible for the torture and sexual slavery of a young woman who has spent half her life fighting for justice. 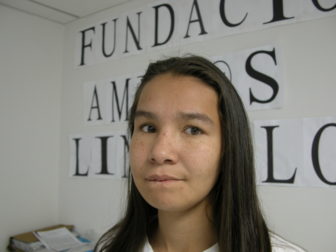 Linda Loaiza López was just 18 when she was kidnapped by a stranger outside her Caracas apartment building, then raped and brutally tortured for nearly four months. “It was like living my own death,” López recalls.
When she was rescued, she was near death, with injuries were so bad doctors likened them to those of a traumatic traffic accident. They included a fractured jaw and nose, disfigured lips and ears and trauma to the head and brain. She had broken ribs, a ruptured spleen and cigarette burns all over her body. One of her nipples was cut off and Linda was so severely malnourished that she weighed only 62 pounds. Over the next two years, López spent more than 600 days in a hospital. To date, she has required 15 surgeries and her psychological scars run deep.
Her aggressor, Luis Carrera Almoina, had bragged that he was untouchable because his father was the politically-connected rector of a major university in Caracas. Despite the modest finances of her family of 13, an undeterred López hired a lawyer who filed charges for rape, grievous bodily harm, kidnapping, torture and attempted murder. But the trial was postponed 38 times, and no judge would touch the case.
Three years later, with the statute of limitations approaching, López waged a hunger strike on the Supreme Court steps, despite having undergone a recent operation on her pancreas. The public display garnered national attention and gave her trial the green light. López thought justice would finally prevail, but instead of vindication, she says that she felt as if she were the person on trial. Although most attempted murder trials normally last three or four months, the judge acquitted Carrera Almoina of all charges within days, and even worse, an investigation was ordered into López and her family for prostitution. “That day, I lived the most tragic moment of this whole process because I realized that it wasn’t just him anymore,” López recalls. “I could see that the whole system was against me!” Devastated, but refusing to give up, she appealed, and on a shoestring budget, founded a small non-profit organization to support survivors of sexual violence. A few months later, a retrial was ordered.
I first heard about her case around this time, while working as a foreign correspondent in Chile, and travelled to Caracas to interview her at a makeshift office.
Six months later, the retrial yielded a conviction for kidnapping and “grievous bodily injuries,” but Carrera Almoina was still acquitted on the heftier charges of rape, sexual violence, torture and attempted murder. Sentenced to six years in prison, he spent just a few months in jail, lessened due to his time served while awaiting trial.
López was outraged. When her final appeal was rejected, she set her sights on an even bigger adversary; the very system that was supposed to protect her. Having exhausted all avenues in Venezuela, López then petitioned the Inter-American Commission on Human Rights (IACHR), hoping to take it all the way to its sister body, the Inter-American Court of Human Rights. Fewer than 1 in 100 successful petitions to the Commission ever make it to the Court[1] and she knew the process would be long. So, she begun working on a law degree. Usually, victims rely on NGOs or legal organizations to take their cases before international courts, but López wanted to test whether survivors could do it themselves. “I think this is a huge opportunity—for survivors to be able to directly petition the Inter-American human rights system,” says López. “There are no limitations. At least, I never felt any. More women could do what I did!”
López graduated from law school in 2011, and in 2013 enrolled in a post-graduate double specialization in international and human rights law. During this time, her petition to the IACHR was accepted, and the exposure attracted two human rights NGOs—the Washington-based Center for Justice and International Law (CEJIL), and Venezuelan-based Committee of relatives of victims of the events of February and March 1989 (COFAVIC). Both joined as co-petitioners, offering pro-bono legal support. “We thought it was an emblematic case,” explains Elsa Meany, a Senior Attorney with CEJIL. “Also, because of Linda herself—because of how she had pursued the case and all the effort she had put into it, we thought that it could have a tremendous impact.”
In March 2015, López testified before the Inter-American Commission on Human Rights—the first case involving gender-based violence against the State of Venezuela. In its Merits Report, the Commission concluded that Linda “did not have equal access to justice” and suffered “revictimization.” The Commission then elevated the case to its sister body, the Inter-American Court of Human Rights, in San José, Costa Rica. 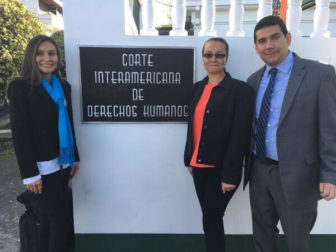 Inter-American Court in San Jose on the day of her hearing (February 6, 2018). (l to r) Linda Lopez, Ana Secilia Lopez (Linda’s sister), who also testified. and one of Linda’s lawyers, Francisco Quintana, of CEJI. (Photo courtesy of Linda Loaiza Lopez.)
On February 6, 2018, López sat before the seven judges donning black and red gowns, while pleading, “It is important that you value my testimony… I come here now because I trust you … and I expect justice.” Venezuela’s legal representative, Larry Devoe Márquez, also made a rare apology, acknowledging that López clearly “did not have access to justice under conditions of equality.” Given its potential, the ruling was much-anticipated by international human rights experts.
Ultimately, the Court ordered the State of Venezuela to compensate López and her family by covering her lifelong medical and psychological care. Further, Venezuela would have to acknowledge its responsibility publicly, establish a national gender-violence curriculum bearing the name “Linda Loaiza”, as well as other prevention measures. “That’s very important to Linda. She pursued this whole process in part to get truth and justice for herself, but also very much on behalf of others,” Meany says. Essentially, this ruling sets a global precedent by establishing that States can be held responsible for the actions of private citizens, thus upping the onus on prevention. “That’s a big idea and a core question of where many women could direct their legislative and advocacy tactics,” she posits.
Whether Venezuela will comply with the ruling is another question. Amid Venezuela’s humanitarian crisis, López says domestic violence and femicide have increased and her Foundation is struggling. López called the ruling a “triumph of justice” in a statement, but said it “will only be effective when the State fulfills its sentence.”
I was surprised that, after so many years of waiting and wanting, her reaction to the ruling was lukewarm. Still, it’s understandable. The scepticism and battle scars have become ingrained in this tireless activist and survivor, who vows “to continue to sustain the struggle of others like myself, as an advocate.”
[1] In 2016, of the 2,567 petitions received by the Inter-American Commission, only 16 were sent to the Inter-American Court. When Linda filed her petition in 2007, only 14 of the 1,456 petitions received by the Commission reached the Court.
Source: Organization of American States website (2018). Inter-American Commission on Human Rights: Statistics. http://www.oas.org/en/iachr/multimedia/statistics/statistics.html Retrieved on February 20, 2018.
About the Author: Jen Ross is a Chilean-Canadian foreign correspondent with hundreds of articles published in newspapers and magazines around the world. She also spent 10 years working in communications for the United Nations, most recently as Editor for UN Women’s global website in New York, before resigning and moving to Aruba, where she now works as a freelance writer and editor, and teaches Human Rights at the University of Aruba.