November 30, 2018February 23, 2021 by milena rampoldi
What would actually happen if the famous theatre hero Hamlet were to rise from the dead and live among us? Would the Prince of Denmark be able to cope with the modern world? Or would another tragedy ensue, as in Shakespeare’s play from the early 17th century?
With his “Gallert Epic”, young Egyptian director Mohamed El Sagheer has brought a modern parody of Shakespeare’s material to the stage. In the original version, Hamlet is plunged into an existential crisis folllowing the murder of his father, the king of Denmark, by his uncle, who then proceeds to marry Hamlet’s mother. By contrast, the “Gallert Epic” is set in rural Upper Egypt.
In Mohamed El Sagheer’s work, the character Hamlet is portrayed more as a simple-minded comedian. It is apparent that the young director has been strongly influenced by Bertolt Brecht, who famously revolutionised theatre at the beginning of the 20th century.
This new production of Shakespeare’s Hamlet builds on three of the most fundamental ideas relating to Brecht’s epic theatre. Firstly: breaking with the illusion to actively involve the audience, which – according to Brecht – must be regarded as the most important factor in theatre work. Secondly, the alienation of reality in order to disturb the audience and make them think: this element of Brecht’s theatre philosophy is particularly evident in the “Gallert Epic”. Thirdly: the combination of teaching and entertainment, of agitation and comedy. 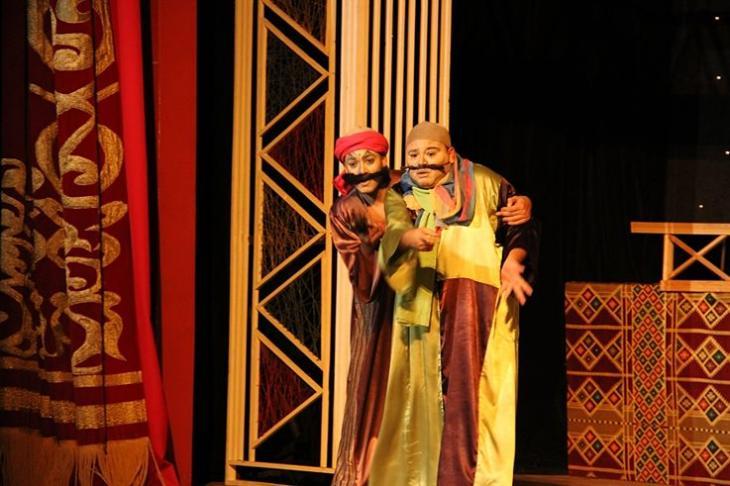 Between modernism and improvisation: in Mohamed El Sagheer’s reinterpretation of Shakespeare’s Hamlet, the main character is more of a simple-minded comedian. It is apparent that the young director has been strongly influenced by Bertolt Brecht, who famously revolutionised theatre at the beginning of the 20th century
A popular comedy
The plot of the “Gallert Epic” mixes several time levels. While the set design and costumes hark back to a mediaeval past, the plot takes place in modern times. Sequences of improvisation that reflect everyday situations familiar to the audience are also incorporated for light relief. The improvisations vary from performance to performance, heightening the sense of the contemporary in Mohamed El Sagheer’s production.
One unique highlight is the live music, which includes sequences from series and film tunes, melodramatic Egyptian songs and the like. Stories and songs from the classical heroic epic of Banu Hilal have also been incorporated.
Banu Hilal epic is one of the most famous epics of classical Arabic folk poetry, which has been handed down orally from generation to generation over many centuries. It consists of around a million verses and tells the story of the migration of the Banu Hilal tribe from the south of the Arabian Peninsula to Egypt and far into the Maghreb. The main themes are heroism, revenge and love. Although the “Gallert Epic” derives its name from the heroic epic of Banu Hilal (Gallerte hulam has a similar consonant structure to the tribal name of Banu Hilal), the proud proper name is nevertheless transformed into a comedic malapropism, thus allowing the director’s ambiguous relationship to classical poetry to shine through.
Eslam Anwar
© Goethe Institut 2018
Eslam Anwar is a freelance journalist in Egypt.
The “Gallert Epic” is a production of the Cairo El Taliaa Theatre, directed by Mohamed El Sagheer, based on a text by El Hassan Mohamed, music by Mahmoud Waheed, set design by Mustafa Hamid, costumes by Hiba Magdy, choreography by Samir and Julia. Cast: Mohamed Ibrahim, Refaat Said, Mahmoud El Masry, Hassan Abdallah, Rami Abdelmaqsoud, Bilal Aaly, Mustafa Said, Maha Hamdy and Mahmoud Suleiman.