US to stop granting asylum to most domestic violence survivors

Groups
slam Jeff Sessions who ruled survivors of domestic abuse and gang violence will
generally not qualify for asylum.

Immigrant
and women’s rights advocates have slammed a ruling by US Attorney General Jeff
Sessions that may make it nearly impossible for domestic abuse and gang
violence survivors to seek asylum in the US.

“Sessions’
decision is a virtual death sentence for individuals fleeing domestic violence
and pervasive gang violence,” the American Civil Liberties Union (ACLU) said on
Twitter.
“It’s
not driven by legal merits but by the administration’s determination to reduce
immigration by any means, no matter the human consequences,” it added.
Sessions
had personally intervened in a closely watched immigration case involving a
Salvadoran woman who sought asylum after being raped and threatened by her
former spouse.
The woman
won an appeal to the Board of Immigration Appeals to overturn a lower
immigration court’s decision to deny her asylum petition, but in his ruling
on Monday, the attorney general said that survivors of “private”
crimes would generally not be granted asylum.
“Generally,
claims by aliens pertaining to domestic violence or gang violence perpetrated
by non-governmental actors will not qualify for asylum,” Sessions said in
his decision.
“The
mere fact that a country may have problems effectively policing certain crimes
– such as domestic violence or gang violence – or that certain populations are
more likely to be victims of crime, cannot itself establish an asylum
claim,” he added.
Sessions
said that an asylum applicant “must demonstrate members in a group, which
is composed of members who share a common immutable characteristic, is defined
with particularity, and is socially distinct within the society in
question”.

We had to
cross the border to be safe so that my mom, my siblings and I could be free
from pain and suffering. I know exactly what it takes to migrate as a domestic
violence survivor and it hurts so much to see this happening.
Erika Andiola,
DACA recipient

The
ruling effectively reverses precedent put in place during the administration of
US President Barack Obama that allowed more women to cite domestic violence and
fears of gang violence as part of their asylum application.
Sessions
told a group of immigration judges, who are part of the Department of Justice,
on Monday that “the asylum system is being abused to the detriment of the
rule of law, sound public policy and public safety”.
He added
that in his “judgement, this is a correct interpretation of the
law”.
‘We had
to cross the border to feel safe’
Monday’s
decision was swiftly condemned by human rights groups and immigrants, who
called it “cruel and heartless”, saying it could endanger the lives
of tens of thousands of women and children.
“By
shutting down most claims of persecution at the hands of criminal gangs and/or
intimate partners, Sessions is demonstrating his contempt for immigrants and
women,” the Southern Poverty Law Center (SPLC) said in a statement on
Monday.
“He
is also providing further evidence of the Trump administration’s anti-immigrant
agenda, which separates families, creates fear in communities, and punishes
vulnerable people who are fleeing violence and persecution in their home
countries,” he added.
Erika
Andiola, a DACA recipient from Mexico and the former press secretary of Bernie
Sanders, shared on Twitter that her mother was a victim of domestic violence.
“We
had to cross the border to be safe so that my mom, my siblings and I could be
free from pain and suffering,” she said. “I know exactly what it
takes to migrate as a domestic violence survivor and it hurts so much to see
this happening.” 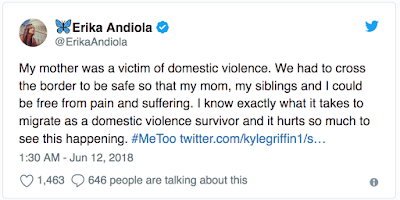 ‘Horrific’
anti-immigrant agenda
Many
called the ruling the “horrific” continuation of the Trump
administration’s attack on women’s rights and its crackdown on immigrants.
“This
administration has rarely missed an opportunity to punish and hurt the most
vulnerable people in our society, but even by their own shamefully low
standards this is a particularly horrific move,” Lizet Ocampo, the
political director for the People for the American Way, a progressive
non-profit organisation, said in a statement.
Shortly
after taking office, the US president signed an executive order, expanding the
powers of the Immigration Customs Enforcement (ICE) agency to focus on
detaining most undocumented immigrants, including those with no criminal
record.
Earlier
this year, Human Rights Watch (HRW) released a
report detailing the harsh conditions women and children have faced
in US Customs and Border Protection (CBP) custody along the US-Mexico border.
HRW
documented more than 100 cases of women and children being held in frigid
conditions beyond the three-day period recommended by CBP.
There
have also been allegations of sexual harassment against guards at detention
centres.
Anger has
continued to
mount over the administration’s recently introduced policy that
separates children from migrant and refugee parents who are caught crossing the
US-Mexico border.
“If
you cross the border unlawfully … then we will prosecute you,” Sessions
said last month. “If you’re smuggling a child, then we’re going to
prosecute you, and that child will be separated from you, probably, as required
by law,” he added.
Trump has
repeatedly rallied against immigrants since the 2016 presidential election,
running on a campaign to build a wall on the US -Mexico border.
The
administration has also ended Temporary Protected Status (TPS) for thousands of
Salvadorans, Haitians, Nepalis, Nicaraguans and Sudanese.
Sessions’
decision on Monday is likely to be challenged in court.