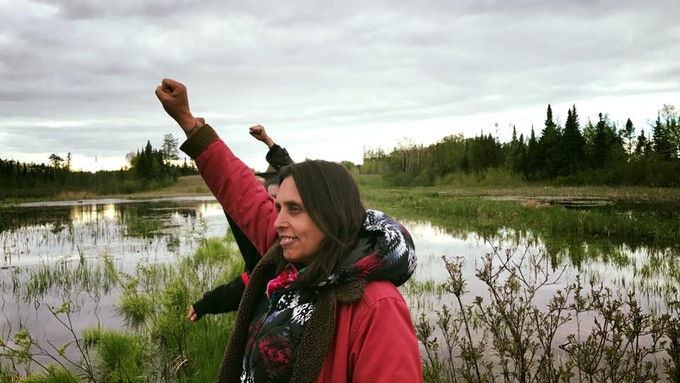 Environmentalist,
economist and writer Winona LaDuke was born in Los Angeles in 1959. She
specialises in rural development and issues surrounding land, food and
sustainable farming are central to her advocacy.
While her
mother was of European Jewish ancestry, her father was a Native American from
the Gaa-waabaabiganikaag reservation in Minnesota, also known as the White
Earth Indian Reservation. Gaa-waabaabiganikaag is home to a group of indigenous
people – the Ojibwe nation. Because of her father’s ancestry, LaDuke was
part of the Ojibwe from an early age. However, she was raised between Los
Angeles and Oregon, and did not live on White Earth or any other reservation
until later in her life.
Influenced
by her father’s advocacy for the Ojibwe people, activism informed LaDuke’s
childhood and at 18, she became the youngest person to speak to the United
Nations about American Indian concerns. And then, while studying economics at
Harvard in the late seventies, LaDuke came into contact with a new
generation of activists. She was invited to join a group of Native Americans
students who campaigned against racism and discrimination on campus and beyond.
For the first time, she found a sense of belonging among people who, like her,
straddled two worlds: the native one, which had featured throughout her
childhood in families and birthdays spent on reservations, and the new world of
elite universities that had just started opening their doors more widely to
non-white, non-Christian students.
Her
meeting Jimmie Durham, an artist and activist who claims to be of Cherokee
descent, was significant to LaDuke in her politicisation. Durham, as a
member of the International Treaty Council, concerned himself with promises
made by the government to indigenous people, and made LaDuke realise that the
problems afflicting native nations were not endemic to the people but the
result of centuries of governmental exploitation, abuse and poor policies. This
understanding changed LaDuke’s approach to her advocacy.
After
graduation, LaDuke moved to the White Earth reservation. She started working as
the high school’s principal while completing a long-distance MA in Community
Economic Development. Despite not knowing the Ojibwe language and initially
struggling to gain the trust of the community, she soon became involved with a
lawsuit to recover lands promised by an 1867 federal treaty to the Anishinaabeg
people (a group which comprises several groups of indigenous peoples across the
United States and Canada).
When, in
1989, the lawsuit was dismissed, LaDuke founded White Earth Land Recovery
Project, which focuses on the recovery, preservation and restoration of both
land and traditional practices, with the aim to strengthen spiritual and
cultural heritage of the Anishinaabeg people. She was executive director for
twenty-five years. To this day, the project secured the return of 1,400 acres
of land stolen from native people.
Underpinning
much of LaDuke’s work is the belief in the Anishinaabe prophecy that their
people are living through an age which asks them to choose whether to continue
treading on “the scorched path” they have thus far pursued, or, conversely,
choosing “the green path”. For LaDuke, the green path looks like a
post-petroleum, land-based economy which has moved on from fossil fuels and
plastic, and instead focuses on an harmonious intergenerational and interspecies
co-existence. With this in mind, in 1985 LaDuke also founded the
Indigenous Women’s Network, which focuses on giving visibility and empowering
indigenous women to participate in political, social and cultural change.
In 1993,
together with folk music duo the Indigo Girls, LaDuke founded Honor the Earth,
a project which aims, through the use of the arts, media and “indigenous
wisdom”, to raise awareness of native environmental issues, thus helping native
communities to survive. She became executive director of Honor the Earth and
worked on a national level to create public support and funding for native
environmental groups.
In the
late 1990s, LaDuke started farming on White Earth and other tribal land. In the
last twenty years, part of her work has focused on campaigning against the
introduction of genetically modified rice on native land, as well on the
construction of several pipelines. She was an important coordinator at Standing
Rock, where in 2017, the Sioux Tribe and supporters fought to protect the
tribe’s drinking water and ancestral lands from the Dakota Access pipeline.
LaDuke is
also a two-time vice-presidential candidate, having joined Ralph Nader on the
Green Party ticket in 1996 and 2000. In 2016, she became the first Native
American woman to receive an Electoral College vote for vice president.
An
indefatigable activist, farmer, author and public speaker, LaDuke has received
several awards throughout her career including the Ann Bancroft Award for
Women’s Leadership Fellowship and the Reebok Human Rights Award. In 1994, she
was nominated by TIME magazine as one of America’s most promising leaders
under forty. As of early November 2017, she is raising funds to buy land on
which she aims to create a hemp and heritage food farm in order to create local
wealth and train young people in farming indigenous food.