The Nabka: 70 Years Of Ethnic Cleansing In Palestine . . . And The World’s Culpable Complicity

Between
1947 and 1949, Zionist paramilitary forces ethnically cleansed and eradicated
over 500 villages and cities in Palestine, killing thousands of Palestinians,
displacing another 750,000, and taking over 78% of the land. The 70th
anniversary of this event — which Palestinians refer to as the “Nakba,” or catastrophe
https://bit.ly/2HeZHwJ
— is due to be commemorated on May 15 at a time when Apartheid Israel’s
brutal occupation continues unabated with an estimated seven million
Palestinian refugees scattered around the world and still being denied the
right to return.
That
right to return to their pre-1948 homelands in historic Palestine — which every
Jew on earth enjoys goo.gl/h5QGNe — is
now being demanded by thousands of Palestinians from across the besieged Gaza
Strip in “The Great March of Return.” As was to be expected and in keeping with
its propensity for committing war crimes and crimes against humanity, Israel’s
response with impunity has been disproportionate, degenerate, and deplorable
with over 40 unarmed Palestinians so far killed and some 5,500 injured.  goo.gl/VDAtvq 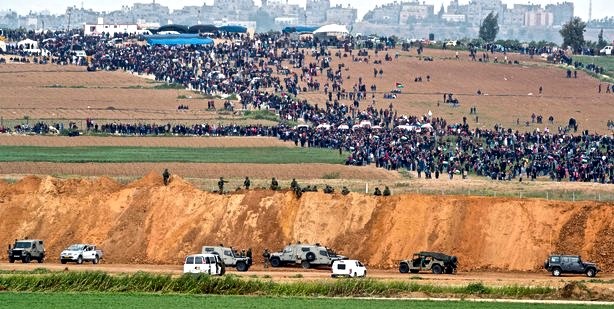 To be
equally expected was the world’s lack of any significant reaction as was also
the case following the far more barbarically destructive assaults on Gaza
during Operation Cast Lead  goo.gl/QAPC67 and Operation Protective Edge goo.gl/UEVJVg.
While the world’s reticence to criticise Israel is to some extent
understandable due to the fear of being accused of the anti-Semitism which has
by design mutated into the “New Anti-Semitism” goo.gl/UEVJVg, it
does not relieve supposedly civilised societies from the responsibility of
demanding justice and retribution for the victims of crimes against
humanity.
“Ever
since the Jews invented the libel charge of ‘anti-Semitism’ in the 1880s (The
word ‘anti-Semitism’ was first printed in 1880.’ The Jewish Encyclopaedia, Vol.
I (1901), p. 641), it has been built up with Jewish money, organisations,
propaganda, and lies (such as the Holocaust-Holohoax), so that now the word is
like snake venom which paralyses one’s nervous system. Even the mention of the
word ‘Jew’ is shunned unless used in a most favourable and positive context.”
Charles
A. Weisman, Who is Esau-Edom?, p. 63.
After
70 years of occupation it must be evident to any honest person with a modicum
of intelligence that Israel’s parasitic inclinations will not be satisfied
until its air, land and sea blockade of Gaza — that prevents the import of
vital food, medical supplies, and the materials required for rebuilding
destroyed infrastructures — has induced malnutrition, disease and death amongst
the imprisoned and persecuted population; will not be satisfied until every
drop of drinkable water which it has not already stolen, becomes too
contaminated for Palestinians to drink; will not be satisfied until all
Palestinian children have been traumatised by being arbitrarily arrested,
interrogated without adult or legal council support, beaten, terrorised, and
forced into signing confessions (written in a language they do not understand)
that incriminate parents, relatives, and friends who are then held indefinitely
under the misused Administrative Detention Order goo.gl/cS28Hs; will not be satisfied until
every Palestinian home, hospital and school has been reduced to rubble with
bombs supplied by courtesy of U.S. taxpayers; and will not be satisfied until
every drop of Palestinian blood has soaked into the stolen Palestinian lands on
which more illegal Jewish settlements will be built. And no, this is not an
exaggerated anti-Semitic rant, it is a fact that has been endlessly reiterated
by racist Israeli leaders who want all of Palestine and not peace.  goo.gl/FudFTa.
Israel’s
unashamed criminality could not be possible without culpable global complicity
which includes mainstream media bias and censorship — led by Arthur Gregg
Sulzberger’s The New York Times — of any news that is critical of
Israel; includes nations who either abstain or vote against UN resolutions
condemning Israel’s inhumane and illegal occupation with the U.S. having used
more vetoes on behalf of Israel than it has on behalf of itself goo.gl/TNR24b;
includes mealy-mouthed Western political leaders who whitewash Israel’
barbarity against Palestinians — who don’t have a single tank, attack aircraft,
or warship — with the disingenuous excuse that “Israel has a Right to defend
itself”; includes the provision of military-related aid to Israel with the
knowledge that it will be used for the continued oppression of the Palestinian
people goo.gl/Fw8xeP; and
includes the hypocritical double standards by which Israel’s criminality is
either favourably judged or just completely ignored.
By
tolerating the iniquities of Israel’s treatment of the Palestinian people,
outwardly high-minded but smug self-preoccupied Westerners are also confirming
the reality that their cherished illusion of democracy is controlled and
defined by powerful private interest groups including a corporate mass media
that is definitely not “the voice of the people”; a military industrial complex
dependent on endless “wars on terror”; extractive industries for oil, gas, and
minerals; an agribusiness bent on exploiting the agricultural potential of
developing countries; and last but not least, the Israel lobby organisations
such as AIPAC in the U.S. goo.gl/HGi534, that
exercise pernicious control over corruption=prone “democratic” governments that
have abandoned their commitment to the “Declaration on the Right and
Responsibility of Individuals, Groups and Organs of Society to Promote and
Protect Universally Recognised Human Rights and Fundamental Freedoms.” goo.gl/phQy8A
“The
responsibility to protect embodies a political commitment to end the worst
forms of violence and persecution. It seeks to narrow the gap between Member
States’ pre-existing obligations under international humanitarian and human
rights law and the reality faced by populations at risk of genocide, war
crimes, ethnic cleansing and crimes against humanity.”

The UN Office on Genocide Prevention and the
Responsibility to Protect.

goo.gl/BPC3FH
As
the hifalutin and well-intentioned pronouncements to be found in international
treaties are either completely ignored or selectively applied — Israel has a carte
blanche for its international law violations — the only hope for the universal
enforcement of human rights must therefore as a last resort come from humanely
compassionate, well-informed, and free-thinking citizens inhabitants of Western
democracies.
“Democracy
is popular because of the illusion of choice and participation it
provides, but when you live in a society in which most people’s knowledge
of the world extends as far as sports, sitcoms, reality shows, and
celebrity gossip, democracy becomes a very dangerous idea. Until people
are properly educated and informed, instead of indoctrinated to
be ignorant mindless consumers, democracy is nothing more than a clever
tool used by the ruling class to subjugate the rest of us.”
Gavin
Nascimento
Sorry Palestine,
but don’t expect justice, human
rights,
and an end to your Nabka any time soon!
William
Hanna is a freelance writer with published books the Hiramic
Brotherhood of the Third Temple, The Tragedy of Palestine and its Children, and Hiramic
Brotherhood: Ezekiel’s Temple Prophesy which has also been
published Chinese, French, and  German, and is due for publication in
Arabic, Italian, Portuguese, Russian, and Spanish. Books and purchase
information, sample chapters, reviews, other articles, videos, and contact
details at:
http://www.hiramicbrotherhood.com