Israel’s Closure of Jerusalem Media Group Condemned by US Watchdog

A US-based media freedom watchdog condemned the closure by Israeli forces of a
media youth association in occupied East Jerusalem and called on the
authorities to allow it to work freely.

On April
18, the Israeli internal security and police forces taped a Defense Ministry
order on the door of the organization’s office that declared Elia Youth Media
Foundation a ‘terrorist’ organization and ordered its immediate closure until
further notice, according to Center for Development and Media Freedoms (MADA). 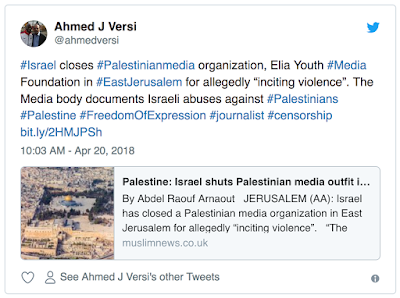 Palestinian
Journalists Syndicate (PJS) recently said the closure of Elia is part of an
escalating Israeli aggression against journalists and media organisations in
the occupied city, and part of systematic targeting of the Palestinian voice
aided by baseless accusations and justifications. 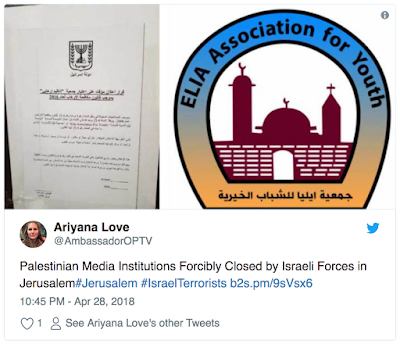 The
office was shuttered two days after the Israeli defense minister tweeted that
Elia, which provides media training to Palestinian youngsters and reports
on local events in Jerusalem, “recruits youths as terrorists and trains
them to produce incitement videos.”
“Israeli
Defense Minister Avigdor Lieberman has failed to produce any evidence that the
Elia Youth Media Foundation is a terrorist organization,” Committee to Protect
Journalists, MENA Program Coordinator Sherif Mansour said in a
statement.

“It is
absurd to equate young reporters with terrorists. We call on the Israeli
authorities to allow Elia Youth Media to resume its work and to stop harassing
the press.”

An annual
report by PJS recorded
909 press violations in 2017, including 740 by Israeli authorities and 169 by
local authorities in the West Bank and Gaza.
Social
media activists shared photos of the Elia’s office as it was ransacked by
Israeli forces, according to the Palestinian Information Center. 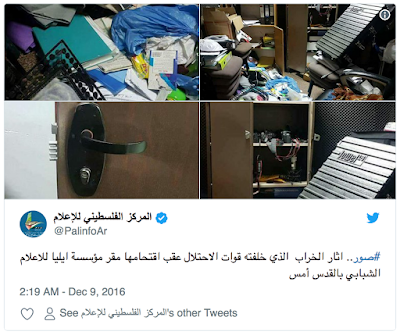