A retired
government official and four policemen have been charged over the gang rape and
murder of an eight-year-old Muslim girl in Indian-administered Kashmir.

The
retired official, Sanji Ram, ordered his nephew and a policeman to kidnap the
girl, Asifa, in January to terrorise members of her nomadic Bakerwal community
into leaving Kathua district in the mainly Hindu Jammu division, according to a
court filing.
The girl
was heavily sedated, kept in a Hindu temple, and gang raped by at least three
men over the course of four days in mid-January, the police said in the charge
sheet made public on Tuesday.
She was
later strangled and her body was found in the forest near the temple.
One of
the three suspected rapists was a policeman.
Another
officer, Anand Dutta, who was initially in charge of the investigation, took
more than $6,000 in bribes to cover up the crime, according to the police.
Dutta
even washed the clothes Asifa was wearing at the time of her death to remove
any blood or semen stains, they said.
He is
among a total of eight suspects who have been detained over Asifa’s rape and
murder. All eight are Hindu.
Residents
of Kathua’s mainly Hindu community, however, claim the men are innocent, and
have protested against their arrest for months.
Land
disputes
The
police, in the court filing, said conflict between local Hindus and Muslim
nomads have increased in recent years, with the two communities filing police
complaints against each other.
Most of
the disputes centre around land.
The
Bakerwals, who herd goats and sheep, spend the winter months in the plains of
Jammu and migrate to highland pastures to graze their animals.
In recent
years, some of them have started to settle in permanent homes.
Ram, who
planned Asifa’s abduction, was “against the settlement” of Bakerwals
in Kathua and “always always kept on motivating members of his community
of the area not to provide land for grazing or any other kind of
assistance”, the charge sheet said.
Prior to
the attack, he imposed fines at least two members of the Bakerwal community for
using a pond and a forest near his land for watering and grazing their cattle,
the police said.
Ram had
even campaigned against one of his neighbours for selling land to a Bakerwal,
the police said, adding that ultimately, Asifa, being a child, “became a
soft target”.
‘Rein in
the mob’
The
police’s account of Asifa’s killing has prompted widespread outrage from
activists.
Talib
Hussain, a member of the Bakerwal community, said Asifa’s murder was a
“well-planned crime to create fear among the Muslims in Kathua and drive
them away from their homes in the Hindu majority area”, he told Al
Jazeera.
There
have always been divisions between the Muslim and Hindu community in Jammu and
Kashmir, he told Al Jazeera, but the “situation has worsened” since
the BJP, led by Narendra Modi, the Indian prime minister, won the national
elections in 2014.
Several
BJP officials have rushed to the suspects’ defence, organising
marches against their detention, while lawyers of Jammu’s Bar Association blocked the entrance to a
local court to prevent the police from filing charges against the suspects.
“There
is only one reason men accused of such a heinous crime have widespread public
support: like the majority of people in Kathua, the suspects are Hindu; the
girl was a Muslim,” wrote Samar Halarnkar in the Scroll
on Thursday.
He said
Asifa’s rape and murder marked a “defining moment” for India.
The BJP
must “rein in the mob”, he said, adding that it “must stand for
what is just and lawful, qualities they have frequently abandoned when
minorities are involved”.
Sunil
Sethi, a BJP official in Jammu and Kashmir, denied the charge, saying they too
“demand justice for the victim”.
He told
Al Jazeera that supporters of the Hindu nationalist party only want the federal
Central Bureau of Investigations (CBI) instead of the state police to handle
the investigation.
Silence
at the centre
While the
BJP’s defence of the accused has been “loud” at the state level, at
the centre, its silence has been deafening, wrote
Monobina Gupta, managing editor of The Wire news website, referring to Modi’s
lack of comment on the case.
The noise
at the state level accompanied by the silence at the centre feed into each
other, she said, “promoting [a] culture of impunity for law-breakers who
target Muslims and other marginalised sections”.
Responding
to the anger over Asifa’s murder, Mehbooba Mufti, the chief minister for Jammu
and Kashmir, whose PDP party rules Jammu and Kashmir in an alliance with the
BJP, pledged on Thursday to introduce the death penalty for child rapists.
“We
will never let another child suffer in this way,” she wrote on Twitter.
Many
others also took to Twitter to question why opposition leader Rahul Gandhi’s
had failed to comment, after which the president of the Indian National
Congress party called for a “silent, peaceful, candlelit vigil” in
New Delhi.
Thousands
joined the vigil at India Gate monument to demand justice for women.
Dozens of
women’s rights activists and students, already angered by what they called
police reluctance to investigate
a BJP politician over the rape of a 15-year-old in Uttar Pradesh, also
took to the streets of New Delhi on Thursday in protest against the two
cases.
But other
Twitter lamented what they called a muted response.
They
noted how another attack in 2012, the fatal gang rape of a young woman dubbed
Nirbhaya, had moved
hundreds of thousands of Indians to take to the streets in protest. 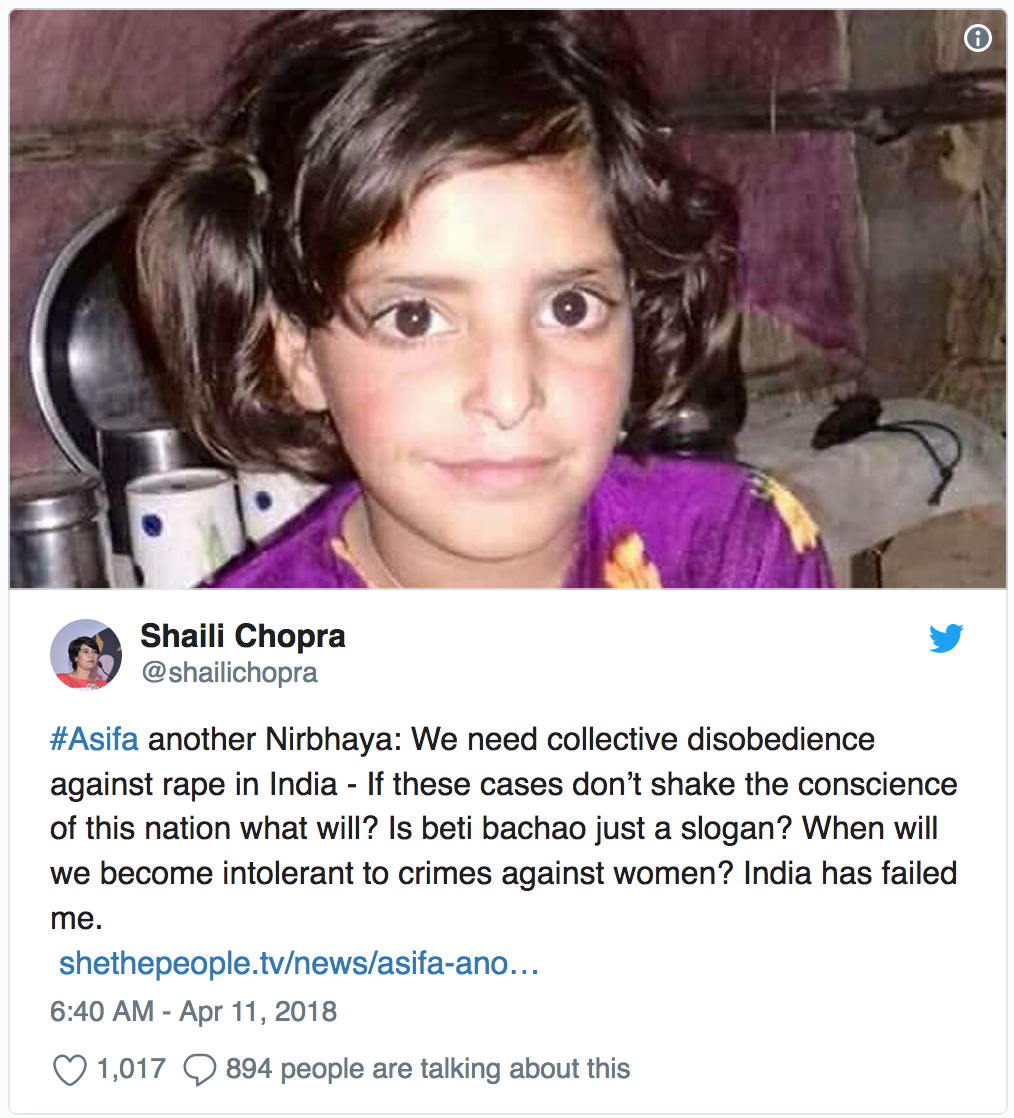 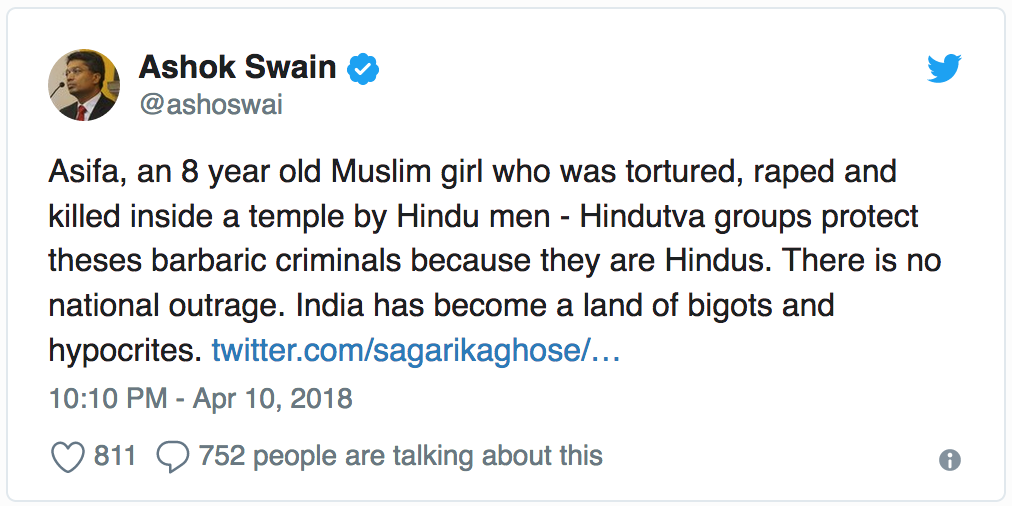 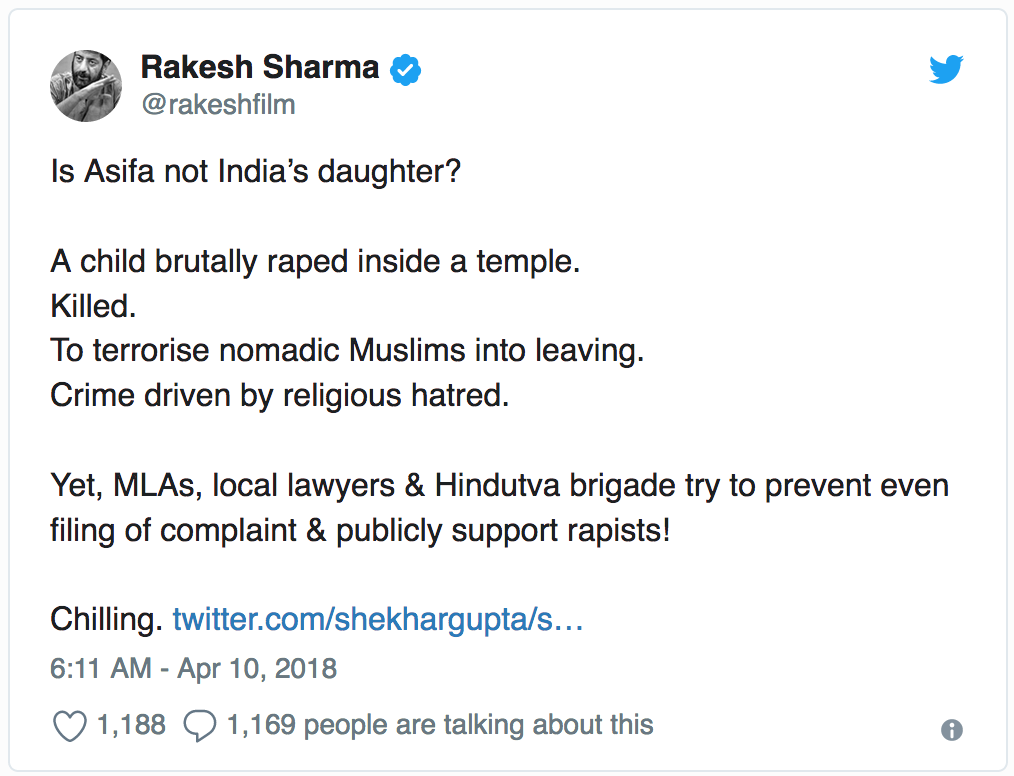