December 9, 2017February 23, 2021 by Milena Rampoldi
By William
Hanna, 9 December 2017. “Now’s the time to put one hundred kilos of explosives
in the Mosque of Omar [the Dome of the Rock], and that’s it, once and for all
we’ll be done with it.”
The army’s
chief rabbi, Shlomo Goren, later Israel’s chief rabbi, immediately after Temple
Mount was captured by Israeli paratroopers on June 7, 1967.
(https://www.timesofisrael.com/jerusalem-in-the-unholy-grip-of-religious-fervor/) 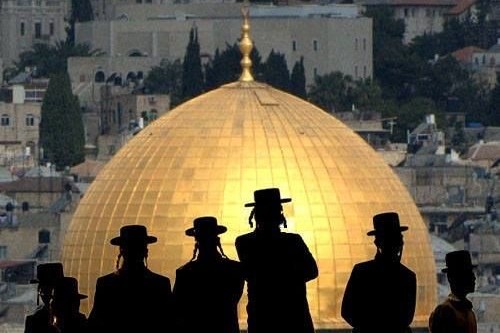 Following
the announcement by U.S. President Trump — a generally acknowledged egocentric,
mentally disturbed, racist, and illiterate psychopath — that the U.S. will move
its embassy from Tel Aviv to Jerusalem which it will recognise as Israel’s
capital, (https://www.youtube.com/watch?v=lmk6oC2CuT0)
the international community and the Palestinian leadership which
has always placed its own enrichment above the interests of the people it is
supposed to represent, expressed outrage at the decision claiming it would
destroy the chances for both “peace” and a “two-state solution” which
realistically have never actually existed, and never will. Furthermore, It
should be remembered that Israel has failed to honour any of the existing
accords or resolutions relating to Palestine including the 1947 UN Partition
Plan for Palestine and the 1993 Oslo Accord.
(https://history.state.gov/milestones/1993-2000/oslo)
In the
meantime Israel has for almost 70 years continued to stage manage an
international theatrical charade of “peace talks” and a “two-state solution”
while having no intention whatsoever of committing to either concept which were
regarded merely as a means of playing for time to facilitate the gradual
larcenous plunder of Palestinian land and the building of more illegal Jewish
settlements, thereby ruthlessly pursuing Apartheid policies that are still
ongoing to this day. It is hard to conceive how any intelligent, soul-searching
individual could possibly believe otherwise, especially given Israel’s
irrefutable ethnic cleansing as defined by the United Nations Office on
Genocide Prevention and the Responsibility to Protect.
(http://www.un.org/en/genocideprevention/crimes-against-humanity.html)
Apart from
Israel’s deliberate Judaisation of Palestine in general and East Jerusalem in
particular,  there is an even more sinister and internationally ignored
Israeli objective which is its fanatical fixation with building a Third Jewish
Temple on Temple Mount, otherwise known to Muslims as Haram esh-Sharif and
where the Islamic Dome of the Rock and the Al–Aqsa Mosque
have stood for over 1,300 years.
“The Temple
Institute is dedicated to all aspects of the Divine commandment for Israel to
build a house for G-d’s presence, the Holy Temple, on Mount Moriah in
Jerusalem. The range of the Institute’s involvement with this concept includes
education, research, activism, and actual preparation. Our goal is firstly, to
restore Temple consciousness and reactivate these “forgotten”
commandments. We hope that by doing our part, we can participate in the process
that will lead to the Holy Temple becoming a reality once more.”
The Temple
Institute’s statement of principles.  (https://www.templeinstitute.org)
Apart from
having a team of rabbis, scholars, scientists and other experts in various
fields being occupied with research that forms the basis for the creation of
the sacred vessels and priestly garments that are fashioned according to the
exact biblical requirements, specifically for use in the future Holy Temple,
the Institute’s international director believes that a pure red heifer could be
used as part of a ritual to bring about the Biblical prophecy of a new Jewish
temple on the Mount.
(http://promosaiknews.com/2016/11/the-temple-institutes-red-heifer-is.html)
Such
organised dedication to the building of the Third Temple in accordance with
contentious biblical prophecies is not restricted to just a few organisations,
but is also part of a national mindset specifically geared for the exclusion of
Arabs and anything Arabic (https://www.haaretz.com/opinion/.premium-1.815624). That
mindset ensures encouragement and support not only from religious leaders  (http://www.hiramicbrotherhood.com/single-post/2015/09/21/The-Sanhedrin-Is-Back-With-A-Vengeance)
but also from leading politicians (https://www.globalresearch.ca/israelis-scheming-to-replace-aqsa-mosque-with-third-temple-report/5541388).
During a
panel discussion in February 2016 organised by the group Students For The
Temple Mount, Deputy Speaker of the Knesset, Oren Hazan said the following:
“If the day
comes and I have the opportunity to lead the country, not to mention become the
prime minister, I will build the temple on the Temple Mount,”
When asked
how he would demolish Al-Aqsa mosque and Dome of the Rock in order to make way
for a temple, Hazan replied that . . .
“It would
not be responsible at this point in time to tell you how we would do it, but I
will say it clear and loud: When I have the opportunity to do it, I will.”
(http://mondoweiss.net/2016/02/when-i-have-the-opportunity-to-do-it-i-will-likud-lawmaker-vows-to-demolish-al-aqsa-mosque/)
Understandably,
Trump’s controversial decision — which has reversed seven decades of U.S.
policy — has also been met by Palestinian protests that Israel always
welcomes because it provides it with an excuse to respond with its usual use of
excessive military force. At some stage in the future, while Israel is
responding to such Palestinian protests, the Islamic monuments on Temple Mount
will end up becoming “unintentional collateral damage,” thereby conveniently
clearing the way for the building of a Jewish Temple. In the meantime the State
of Israel and President Donald Trump will continue to share a common
characteristic: they are both undeniably psychopathic as explained in the must
read following article by Laurent Guyenot.
(https://www.veteranstoday.com/2015/02/03/psycho-israel/)
William Hanna is a freelance writer with
published books the Hiramic Brotherhood of the Third Temple, The Tragedy of
Palestine and its Children, and Hiramic Brotherhood: Ezekiel’s Temple
Prophesy which is also due to be published in Arabic, Chinese,
French,  Italian, German, Portuguese, Russian, and Spanish. Book
and purchase information, sample chapters, reviews, other articles, videos
including Palestine: The Irrefutable Truth, and contact details at:
http://www.hiramicbrotherhood.com