The Future of the French Electoral Clash

by Massimiliano
Fanni Canelles, Social News, 24 April 2017, English Translation by
Milena Rampoldi, ProMosaik. For the first time, the two
historic parties in France, Republicans and Socialists, will not be present at
the second round of the Presidential Elections. Emmanuel Macron of the brand new
European movement “En Marche” and Marine Le Pen, of the Anti-European, and
Philo-Russian “Front National” will compete for the run-off election on the 7th
of May. After England, Austria, and Holland, this will be one of many
populist clashes where apart from the election of local governments, the
European Union will also be called into question. 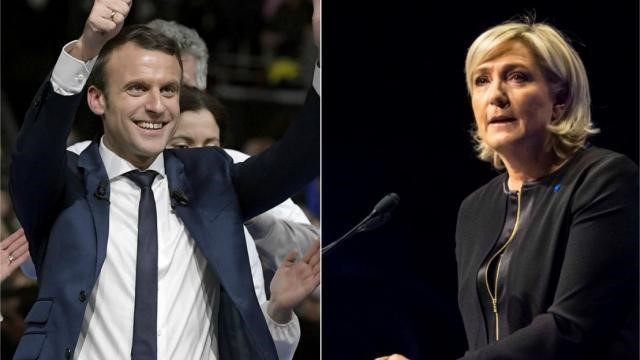 For Marine Le Pen (21%)
it will be difficult, even if not impossible, to improve. Emmanuel Macron managed
24% and was immediately supported by Fillon (20%), the candidate of
the right Republican Party, Hamon, and by President Holland of
the dying Socialist Party (6,35%). What is difficult to forecast is the
direction of the votes of the extreme left of Mélenenchon (19%) who
could paradoxically converge into the extreme right because of the
anti-European and anti-establishment vision. In addition, Marine Le Pen will
try to gain support among the Gaullists in the Republican rows of minor
candidates like Dupont-Aignan, Asselineau, and Cheminade. Le Pen is also
supported by the communities of the extra-European French territories, and
paradoxically even by the French Islamic communities which fear forms of
marginalization because of the resurgence of the terrorist attacks of Islamic
extremism. However, according to the surveys, Emmanuel Macron is clearly the
favourite to become the President of France.
Without any doubt, this result
will show the need for change at the top-level of institutional power. People
do not trust traditional parties, and try to substitute them by new forms and
new political movements. Unlike the US-Presidency and Brexit, this time Social Media,
Facebook in particular, have not managed to tarnish over the intelligence of
European citizens who only partially followed populists’ fake news. However,
we need valid alternatives to the existing power. In France, the
autonomist Macron has been able to catalyse this search, and this shows that
citizens still trust Europe. However, this is the last chance for the
European Union to continue to exist. The European people will not accept
this institution, if it does not consider their requirements. In particular, those
who live in the countryside and in rural areas feel more abandoned
than the citizens of urban areas. It is necessary to protect work and welfare
in those peripheral territories where right-wing extremism rises and promises
the exit from the European Union. To make an example about how different the
urban electorate is from the rural one: in Paris Le Pen comes last, and
obtains only 4,99 % of votes.
The European Union has also to
act united in the field of foreign and domestic politics, and has to reach
forms of government, detached from the financial mechanisms. Europeans
are primarily concerned with security. It will be necessary to identify
a system of defence and police. We cannot accept the development of
internal terrorist networks. In France, according to the authorities, more than
16.000 Muslims are potentially radicalised. In Germany, the number of Islamic
extremists is 1.600, and 570 of them are able to commit a terrorist attack. The
mobilisation of Swedish jihadists to reach the rows of the Islamic State has
been of approximately 300, one of the biggest in Europe. In many countries, a
network of mosques and Islamic organizations is connected with international
jihadist organisations.
These days, before the second
round, the election campaigns will be inflamed. The attack of the Champs-Elysées
is just the last of a series of attacks having been registered in Europe since
March 2016. And it has been increasingly evident that its objective is not
destructive, but demonstrative. The terrorist attack wants to raise insecurity
and fear in the population by pursuing the only goal to destabilize the
government, democracy, and peace we have been living for a long time thanks to
the European Union.
Islamic extremists, ISIS, the
Islamic State or DAESH, only want the clash with the West, the Jihad, the Holy
War, and do not have other aims than to try to cause an implosion
within the European Union. And to do this, they support the enemies of
Europe who want to destroy it. Besides the electoral support by the French
Islamic communities also the Islamic extremists, with their demonstrative
terrorist attacks, paradoxically produce an election campaign in favour of
the anti-European extremism of Marine Le Pen. Therefore, during the next
weeks, the risk of terrorist attacks in France will be very high.
However, you have to raise
awareness that nationalist and populist movements are not helpful at
all, because they only contribute to glorify hatred, social and cultural
discrepancy, and the fragmentation of the European society. Europe has only one
solution: it has to unify against Islamic extremism and not to split
into small states. Since these small states would be easily manipulated and
blackmailed by military means, by Islamic forces in the Middle East who still
have the petrol as a mean of power, and by the super powers and in particular
by Russia which has already tried to enter European politics by agreements
and financial supports to movements like Le Pen, Grillo, Salvini, Farage or to
pro-Russian associations.
We have to consider that to
struggle against terrorism, in a fluid society like the globalised society,
where our freedom is also the freedom guaranteed by the right of privacy and
movement, it is necessary to eradicate the preconditions of terrorism. Let
us not to forget that once started, the whirlwinds of violence become unstoppable,
and that in general they are always provoked by war and suffering of the
population. And with the time this suffering comes back, like a boomerang, to
all who cast the first stone, and they are the Western States.