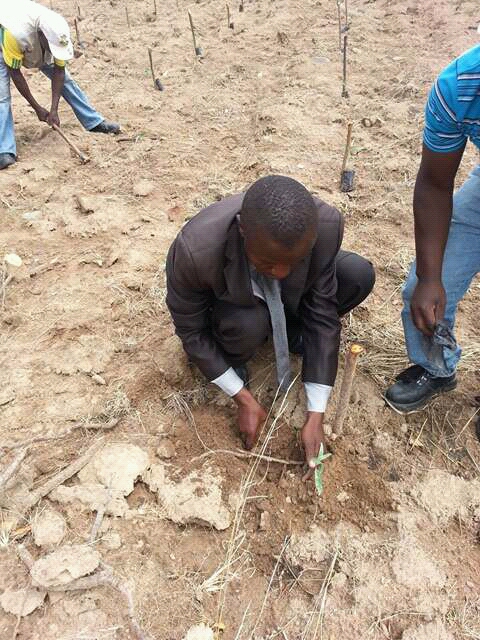 By Denise Nanni and Milena Rampoldi, ProMosaik. In the
following our interview with Misheck Marowa of the Environmental
Comprehensive Action Group (ECAG), a homegrown organization of environmental
conservation lobbyists in Zimbabwe with the aim to change the status quo of the
environment; a pollution free environment is our goal. The project also aims to
address food security, poverty reduction and enhancing livelihood within communities. Our main aim will be premised on over spearing issues
to do with Biodiversity conservation, enhancing sustainable livelihoods, addressing
issues to do with climate change and its effect through environmental education
both in the community and the business community, conservation agriculture and promoting
good environmental governance.
ECAG
is an organization formed by a group of Great Zimbabwe University students. The
situation in Zimbabwe needs people who are creative and innovative, it’s not only
difficult to find jobs for graduates its now even difficult for students to find
attachment places which should not be the case under normal circumstances and saw
it necessary to create employment for themselves and put theory into practice for
the betterment of the nation at large. However, the organization plans to create
employment opportunities to the youth in Zimbabwe. The organization needs to be
given a chance to rescue the environment in Zimbabwe which is increasingly deteriorating.

What are the main environmental issues in Zimbabwe? 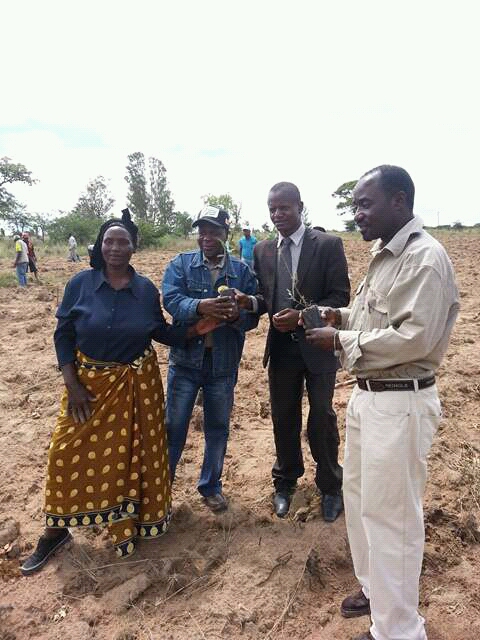 I
have identified deforestation, drought and desertification, soil erosion and
fires, water pollution, loss of biodiversity, water hyacinth invasion on lakes
and dams, air pollution, poor waste management as well as land degradation as
some of the environmental challenges facing Zimbabwe,
more.
It
is estimated that between 100 000 and 320 000 hectares of forest cover were
lost per year between 2000 and 2008. Small scale tobacco farming is believed to
have significantly to such rampant deforestation. With no figures available on
the state of the country’s forests since then, it is anyone’s guess as to how
much tree cover is left out there.
With
the status of the country’s wildlife also unknown, increasing poaching
activities are threatening with extinction many of Zimbabwe’s unique species
such as the black rhino, pangolin, ant eater and leopard.
Right
now as we speak there us a looming disaster in many lakes and dams, dams like
Lake Chivero and Lake Kyle and many others have a problem of water hyacinth invasion.
This is threatening the ability of these dams to provide drinking water for the
urban areas.
Pollution
in all angles is also a threat. The local authorities’ poor waste management is
worsening the situation. In Harare alone we have witnessed a lot of flooding in
the CBD as litter has closed the drainage system. Burst sewer system in residential
areas is also a nuisance.
Veld
fires are a common thing in many rural and agricultural areas. Despite awareness
campaigns people always prefer to burning when they prepare for the planting
season.
Poaching
is also an environmental nuisance.
Corruption is believed to have fueled poaching. Some poachers have
reached to cruel instances of poisoning elephants in Hwange National Park.
What are the events that brought to the foundation of ECAG
and what are its activities? 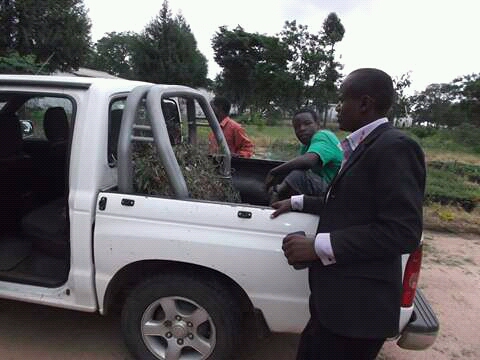 The
situation in Zimbabwe needs people who are creative and innovative, it’s not only
difficult to find jobs for the academics but it’s now even difficult for
students to find attachment placing which should not be the case under normal circumstances
and saw it necessary to create employment for themselves and put theory into practice
for the betterment of the nation at large. However, the organization plans to create
employment opportunities to the youth in Zimbabwe. The organization needs to be
given a chance to rescue the environment in Zimbabwe which is increasingly deteriorating.

In
2013 the then students at Great Zimbabwe University could were having
challenges finding attachment placing so a group of students came together and
formed ECAG. Therefore, it could be safe to say ECAG was formed against a
background of the country’s economic quagmire and looming environmental
problems which came with it.
ECAG
activities are outlined below.
Biodiversity Conservation
ECAG will concentrate in wildlife, forestry, Community Based
Natural Resource Management (CBNRM), Pollution, Watershed and World Heritage sites.
ECAG will partner with other organization, communities and corporate
organization in implementing such activities
ECAG will establish community led projects in the conservation
of biodiversity
EACAG will also engage in recycling and waste management.
Environmental Governance
ECAG will establish Environmental Education programs
Policy Advocacy
Sustainable livelihood
ECAG will concentrate on Food Security
Water Management
Income generating activities
Conservation Agriculture
Climate Change
Mitigation
Adaption
ECAG
has embarked in a number of clean up campaigns where the organization raised
awareness through the participation of some members of the public. A significant
clean-up campaign was held in Masvingo City. The program was facilitated by ECAG
with support from the Environmental Management Agency, Great Zimbabwe
University,  Nyaradzo Funeral Services
and Masvingo City Council. The program was a milestone as a large number of
students, vendors and members of the public participated.
ECAG
also embarked on reforestation and afforestation efforts. We engaged the
tobacco farmers and urged them to plant more trees as they are the ones
responsible for much of deforestation. To earmark this we planted more than
1000 gum trees with the community in Hwedza on the National Tree Planting day.
In what ways do you raise environmental awareness and how
civil society has been responsive so far? 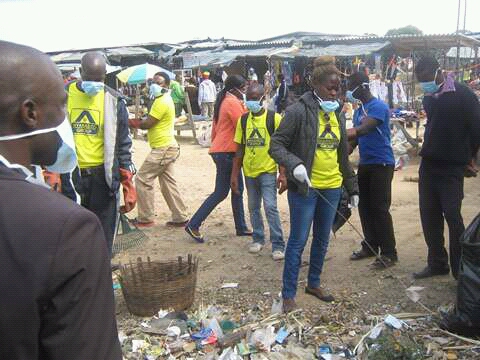 We
traditionally raise awareness through participatory clean up campaigns and tree
planting initiatives. We always want people to participate because we believe
that this will always be remembered because people would feel part and parcel
of the program. Moreso, action speaks louder than words, the message would be
easily understood.
We
also use electronic and print media for environmental awareness. We are also
moving with technology as we are now using social medias to spread our
environmental news.
However,
fostering behavioral change is still a challenge.  Some are responding well to our awareness
campaigns and go home and practice what we had taught them. On the other hand,
just after the clean up some will go back to their ways which are detrimental
to the environment.
What are the main causes of pollution and threat to the
environment in Zimbabwe? 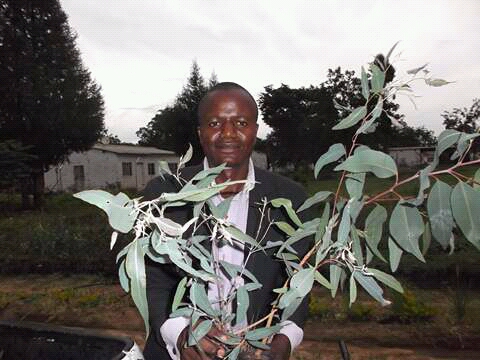 Pollution
is any disturbance to the quality of the environment. Common types of pollution
in Zimbabwe are water, air and land pollution.
The
Zimbabwe Environment Outlook published in 2010 identifies sewage treatment
plants, industries, agricultural activities and mining as the main sources of
water pollution in the country.
WATER
pollution has been documented as a contributor to a wide range of health
problems and disorders in humans.
It
has been shown to have negative impacts not only on aquatic organisms but on
wild animals and the environment as a whole.
Water
pollution is the contamination of natural water bodies due to direct or
indirect discharge of effluent into water bodies without adequate treatment to
remove harmful compounds.
Water
pollution occurs when high levels of nutrients from waste water, fertilizers
and sewage end up in water bodies encouraging algae and weed growth.
This
scenario has encouraged the growth of the water hyacinth in Lake Chivero,
Manyame and Shagashe rivers as well as other polluted water bodies.
Large
quantities of biodegradable matter deplete oxygen in the process of
decomposition.
Aerobic
organisms die when the oxygen is depleted and due to this anaerobic organisms
proliferate resulting to the production of more harmful toxins like ammonia.
Causes
of water pollution
There
are many causes of water pollution. Knowing the causes of water pollution helps
us to stop the pollution and to protect the environment so that it can be
enjoyed by future generations.
Industrial
activities
Many
rivers are polluted due to effluent flowing into them from industries. Some
industries discharge fumes or gases that can pollute the air.
When
the rains come, these gaseous particles are deposited together with the rain
onto the surface and underground water resources.
Untreated
sewage discharges have been a major contributor of water pollution in the
country.
This
is due to broken sewer pipes, blocked manholes and non-functional sewage
treatment plants in major towns and cities.
Marimba,
Mukuvisi, Shagashe, Manyame, Sakubva, Dora, Gweru, Mazai and Matsheumhlope are
some of the rivers that are polluted by sewage discharges.
The
treatment of crops with herbicides, pesticides, insecticides and chemical fertilizers
bring significant benefits.
However,
these products can find their way into water bodies polluting the water.
Livestock
productions also contribute to pollution by the production of large quantities
of organic waste which can be washed away by rainwater into rivers and lakes.
Households
pour a large amount of organic and inorganic waste down the drain which can
pollute both surface and ground water.
Effects
of water pollution
The
use of polluted water results in the outbreak of diarrheal diseases such as
cholera and typhoid as once experienced in the country in 2008.
Polluted
water is expensive to treat for it to be potable as it needs more chemicals to
treat. This increases the cost of accessing clean and portable water.
Pollution
of water leads to proliferation of aquatic weeds and deterioration of habitats
for aquatic organism.
These
weeds clog pipes, reduce sunlight penetration into the water body and use up
oxygen as they decompose.
This
can lead to death of animals such as fish and frogs due to lack of oxygen.
Pollutants
such as lead and cadmium disrupt the natural food chain since they are consumed
by tiny animals which are in turn eaten by larger animals and spread the
pollutants to the other animals including humans through the traces in their
systems.
These
pollutants can eventually kill the food chain
Air
pollution in Zimbabwe is caused by industrial emissions, agricultural process
and most importantly vehicle emissions. All these processes are emitting
greenhouse gases into the atmosphere making air unsafe to breathe therefore
putting human life at risk. There has been an influx of vehicle into the
country and this is not good news to the environment.
The
economic impact include corrosion of building materials such as lime stone
blocks and roofing sheets from acid rain generated from sulphur dioxide
emissions and can cause dysfunction of sensitive ecosystems.
Land
pollution.
Illegal
dumping of waste, littering in streets and littering along highways, soil
erosion are some of the things that make our land unattractive. Erratic refuse collection
by the local authorities is also exacerbating land polluting. The result is an outbreak
of cholera and typhoid which are documented for taking human life.
The
rise of informal sector and population growth is also increasing waste
generation. The local authorities blame vendors for lettering cities and towns.

Do you cooperate with local authorities and institutions? If
yes how? 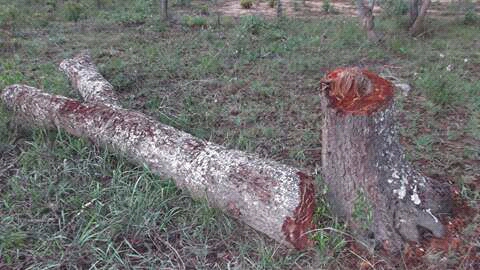 Yes
we do cooperate with local authorities. Our partners are the Ministry of
Environment, Water and Climate, traditional authorities, the NGO
fraternity,  media fraternity, traditional
private companies.
In
every activity that we do engage these stakeholders. And whenever they have
activities, initiatives or programs, they engage us. So the relationship is intertwining
and interlinking.
Challenges
facing ECAG
We
are facing financial challenges. All the activities we have been doing, were
done in our own capacity. We are finding it difficult to have access to grants,
funding or donors. We have a lot of project proposals but what we lack is funding.