KCDC Nepal – for the empowerment of poor communities

By Denise Nanni and Milena Rampoldi, ProMosaik. From India today we
are moving to Nepal where we talked to Tanka Theeng, Executive Director and
Found Director of the organization KCDC,
supporting poor communities in Nepal. We talked about the main problems
communities face in Nepal, and about the engagement of KCDC to support and
empower them. 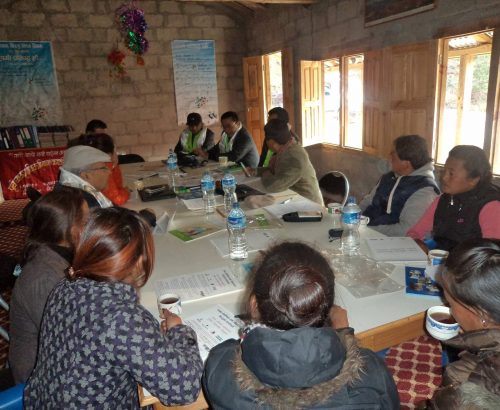 ·
To use community-based resources as inputs into a technical vulnerability mapping (for example,
through a geographical information system (GIS)) that will yield information on regions or VDCs that are particularly vulnerable to human trafficking.
This information will be used to plan responses to reduce this vulnerability.

Approach:
Project is needed in thrust; programs
activities can be broadly classified as: (i) those that take a
community based approach with demand driven and a welfare-orientation and (ii) those that take a bottom-up (or community–based) approach and have an empowerment orientation. The top- down/welfare-oriented programs are generally one-time activities that concentrate on raising awareness, with only minimal follow-up or subsequent community–level support.
They tend to be prescriptive (telling people what to do) rather than facilitating a process of informed decision–making. Bottom–up/empowerment–oriented programs tend to be rooted in communities and usually address trafficking in the context of other needs and priorities with empowerment as an overall aim. They also tend to establish community or group support systems to help those in difficult circumstances and to address trafficking from a position
of collective strength.

Working Approach of KCDC
Do you cooperate with local authorities and institutions? If yes, how?
Coordination with District Stakeholders and
Community Stakeholders:
KCDC works and coordinate with District Stakeholders and Community
Stakeholder, other agencies, organizations, groups  or individuals who have a direct or indirect
interest  in the counter-trafficking  activities and  responses,
and  who affect or are positively
or negatively  affected, by the  implementation of activities. Stakeholders
could include governments, donor communities, implementation partners,
businesses and project beneficiaries.
Relevant stakeholders should work together to develop or finalize
instruments, procedures, performance indicators, recommendations, etc.  This is important because a comprehensive,
collaborative and Coordination approach is necessary to countering trafficking
in persons in an effective and sustainable way; no single group, agency or
individual can do this alone.