In Erdogan’s Turkey, an Artist is Jailed for Painting Reality

A Turkish court has handed down a two-year, nine-month and 22-day jail sentence to a Kurdish artist because of her painting of a Kurdish village being razed by Turkish security forces. 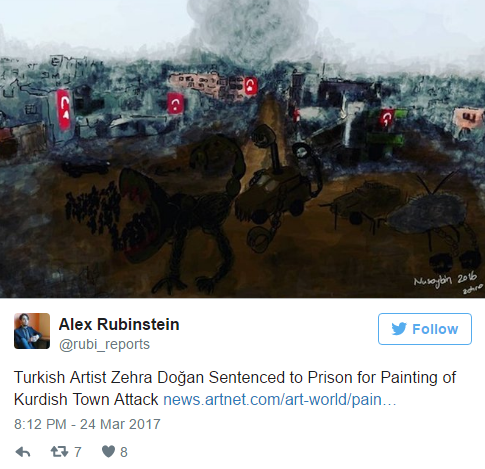 Zehra Doğan, an ethnic Kurd from Diyarbakır in southeastern Turkey, was given the sentence by the Second High Criminal Court of the Mardin province after having been arrested last July. The painting in question shows the destroyed cityscape of Nusaybin, with Turkish flags draped across blown-out buildings.

Close to the border with Syria, Nusaybin is home to a large Kurdish population and Turkey says that the painting, along with her social media posts, are proof that Doğan has connections to the Kurdistan Workers’ Party, or PKK, a group which has been pushing for an autonomous Kurdish region since 1984, but which the Turkish state considers a terrorist organization.