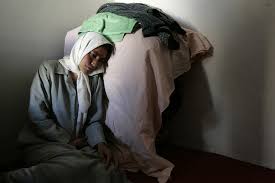 The razor scars on 18-year-old Leila’s hands and neck bear witness to her past attempts at suicide. The Herat teenager told IWPR that she had become deeply depressed after her marriage to a 45-year-old man.

“I married a much older man because of my parents,” she said. “Later, I realised that this was not what I wanted. I was controlled and banned from going anywhere, and his interference in every little detail of my life became unbearable. I was so aggravated that I decided to end my life by taking poison, but survived. Later, I tried again to commit suicide with a razor, but again I was rescued.”

“Now, I feel better following medication and a long series of consultations,” she said.

Mental health issues are rampant across Afghanistan, fed by the legacy of more than three decades of conflict. Psychologists note that women bear the brunt of the problem.

Experts in the northern province of Herat say that rates of depression are rising among women, fuelled by factors including gender violence, poverty and associated social problems.

Local mental health practitioners estimate that they have dealt with 20 per cent more referrals this year than last year.

Abd Al Rahman Hamraz, an official with the Herat department of public health, told IWPR, “Our statistics show that rates of depression have risen, with more referrals to mental health services.”

Wahid Nourzad, head of mental health services in Herat Regional Hospital, said that this reflected a growing awareness of the problem among women.

“I estimate that this same high rate of depression was also true in the past, except it wasn’t reflect by statistics due to a lack of awareness and fewer mental health clinics.”

Herat psychologist Mahdi Hossaini said that the condition could be categorised as minor, mild, and major depression.