By halting a proposed $150 million police precinct, Seattle activists have made headway in redirecting funding toward services like affordable housing and education. 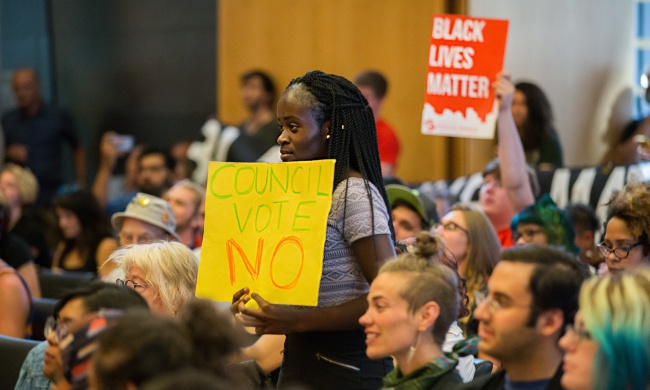 Seattle City Council members took their seats on Sept. 19 with the unhurried pace of business as usual. One of them called for public comments, but after a few people spoke, a commotion erupted in the back of the chambers. Six black and brown people shuffled down the central aisle, bounded by chains on their wrists, ankles, and stomachs. Some were clad in orange jumpsuits, while others wore black shirts bearing the phrase “Block the Bunker” in white letters.

White activists donning police hats and pig noses trailed behind, nudging them forward with toy batons. “I’ll throw you around if I want to throw you around!” one of them screamed.

Among the chained activists was the 22-year-old organizer Evana Enabulele, who wore dark lipstick and a colorful head scarf tied into a bun. She shuffled toward the podium and grabbed the microphone. Plans to spend nearly $150 million on a new police station in North Seattle, she said, signaled to the poor and people of color that political leaders were more concerned about punishing residents than helping them.

“You want to sit there and put a $149 million bunker 20 blocks from where I live,” Enabulele told the city council members, “when I see people who are houseless, I see people who are using their bodies to get money. Why don’t you invest in them?” she asked, her voice steadily rising. “Because you don’t give a damn!”