51% of young voters and 60% of Democrats want economic sanctions against Israel over its illegal settlement construction in the occupied West Bank. 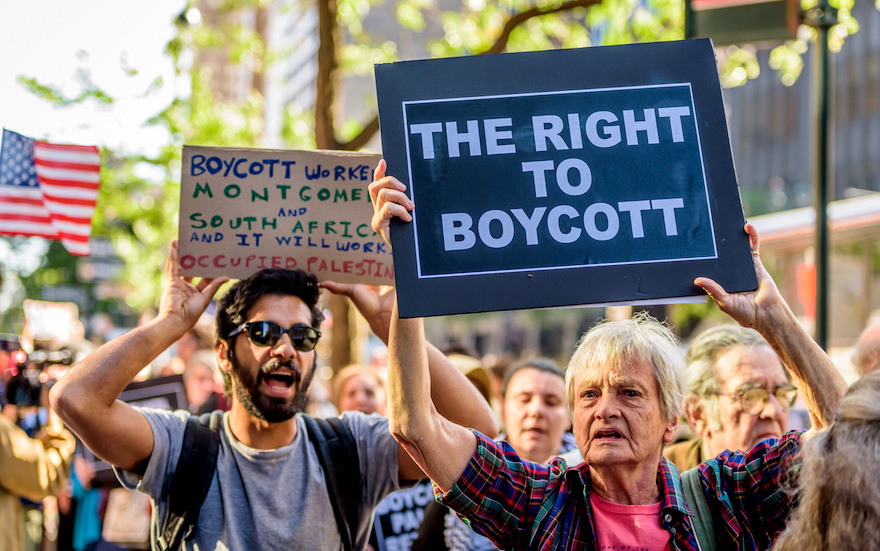 Protesters demonstrate against a state-sanctioned backlash against the movement for Palestinian human rights after Gov. Cuomo signed a McCarthyite executive order requiring state agencies to divest from organizations that support the Palestinian call to boycott companies profiting from, or cultural or academic institutions complicit in, Israel’s oppression of the Palestinian people. New York City, June 9, 2016.(Photo: Erik McGregor/Pacific Press/ Sipa via AP)

“American attitudes on the Israeli-Palestinian conflict,” two polls released by the Washington-based Brookings Institute on Dec. 2, showed growing numbers critical of Israeli actions and eager for U.S. responses, including sanctions and U.N. measures, to counter them.

“The Democratic Party’s base is very split from leadership now,” Peter Feld, a Democratic strategist and polling expert in New York, told MintPress News about the survey results.

“But in this moment of overall crisis for the Democrats, they’re going to have to listen to the base.”

According Brookings, 40 percent favored “Obama supporting or sponsoring a United Nations resolution to end Israeli settlement construction in the West Bank before he leaves office.”

But among young voters between the ages of 18 and 34, the number increased to 51 percent, while 65 percent of Democrats supported the measure.

Similarly, 46 percent of respondents, including 51 percent of young voters and 60 percent of Democrats, favored “economic sanctions” and “more serious action” in response to Israeli settlement construction.

When Brookings asked the same question in November 2014, only 38 percent of respondents, including 48 percent of Democrats, favored “sanctions” and “serious action.”

The differences between the two sets of numbers — one collected on the heels of a bloody Israeli military operation that killed over 2,200 Palestinians in the Gaza Strip alone, the other after more than two years of relative, if checkered, quiet — indicate that domestic U.S. politics, rather than developments in Palestine, may have spurred the shift in public opinion.

‘A worldwide symbol of resistance to oppression’ 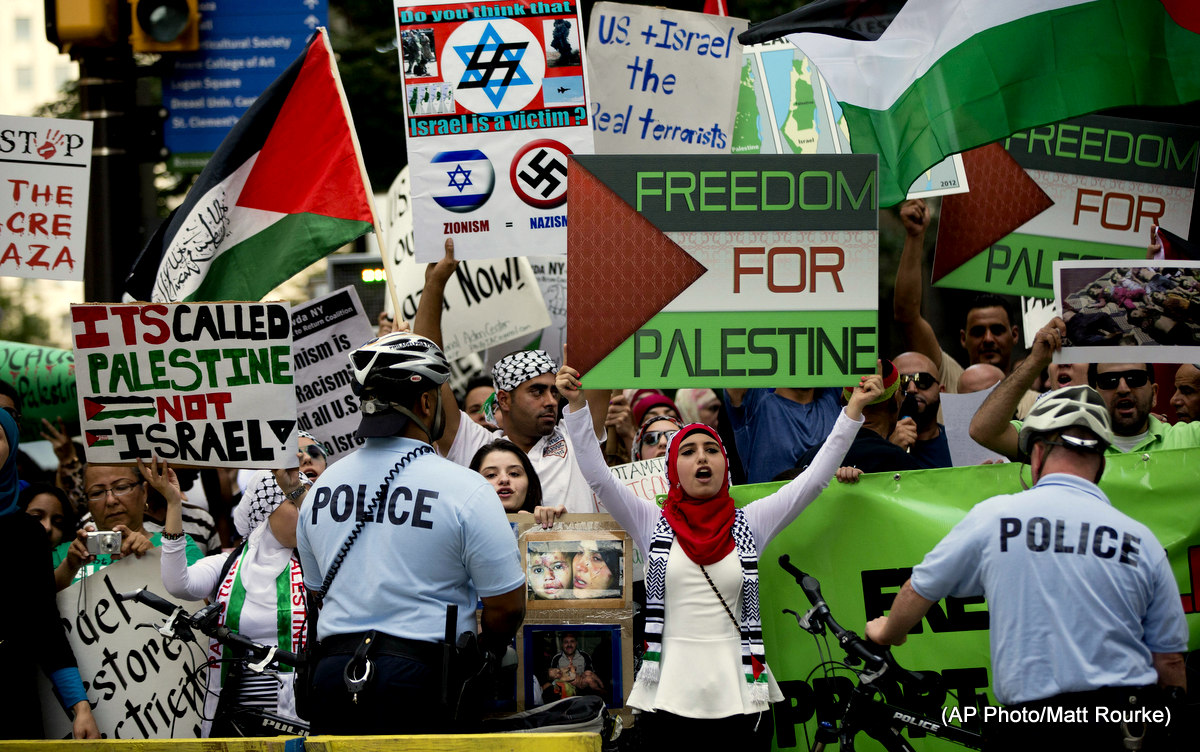 Protesters demonstrate against the Israeli military operation on the Gaza strip, in Friday, July 18, 2014, in Philadelphia.

“The coalition-building and patient educational outreach efforts that occurred over the past three decades with other oppressed communities engaged in struggles for social justice helped to shift the terms of discourse at a grassroots level, where it counts,” Richard Reilly, a longtime Palestine activist in Chicago, told MintPress.

He added that Palestinian outreach to other movements since the 2014 Gaza offensive had helped to establish Palestine as a broad, popular cause.

“The Palestinian flag, long a worldwide symbol of resistance to oppression, has now became ubiquitous in U.S. protests from Ferguson to Standing Rock.”

These efforts won national attention during the 2016 presidential election, when many Palestinians backed an underdog challenge by Sen. Bernie Sanders of Vermont.

Pressure from his supporters ultimately forced the Democratic candidate to publicly address the issue, telling a national debate audience on April 14 that “we are going to have to treat the Palestinian people with respect and dignity” and “we cannot continue to be one-sided.”

Sanders had declined to attend the AIPAC conference, but addressed a speech to its participants from a high school in Salt Lake City, Utah, telling them that “to be successful, we have also got to be a friend not only to Israel, but to the Palestinian people, where in Gaza unemployment today is 44 percent and we have there a poverty rate which is almost as high.”

While hardly groundbreaking among progressive activists, Sanders’ comments marked a sharp deviation from the norms of U.S. electoral politics, in which candidates usually compete to express more enthusiastic, unreserved support for Israel than their opponents.

Along with the erratic approach of Republican nominee and President-elect Donald Trump, whose statements on Israel and Palestine have veered wildly across the political map, they left many observers with a sense that the issue was no longer an untouchable “third rail.”

They also exposed millions of Democrats and other voters to the novelty of candidates treating it as one fit for debate, rather than acquiescence.

Coming after more than a year of engagement and criticism, Sanders’ shift, a partial reversion to his politics of an earlier era, was less an innovation than an acknowledgement that Palestine had emerged as a natural loyalty for millions of young voters who see their support for it as a natural part of their progressive identities.

‘Simply due to the young’ 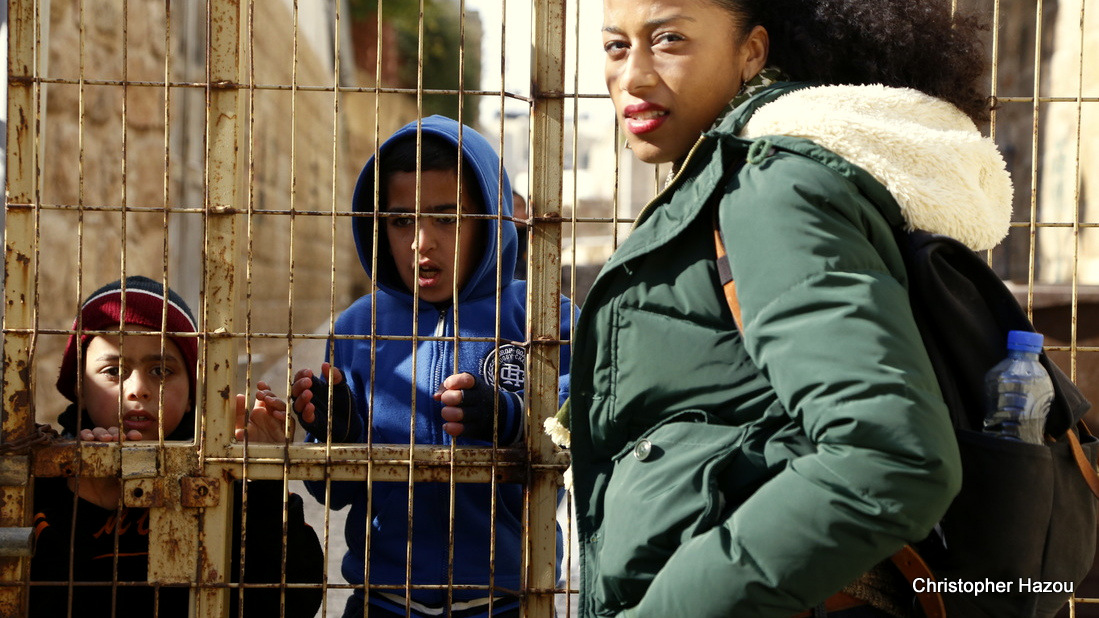 In Hebron, a fence imposed by the Israeli military separates two Palestinian children from a member of a young group of American activists called the Dream Defenders during a trip to Palestine.

“I think most of what’s driving the change is simply due to the young,” Peter Feld, the strategist and polling expert, said.

“Young Democrats, in particular, are sympathetic to justice struggles and hostile to racism, which is also why they were so anti-Trump.”

He added that the extreme Zionism dominant among presumptive Trump nominees might widen divisions on Palestine at the grassroots even more quickly.

“Hopefully in 2018 one or more high-profile Democrats will lose a reelection primary because of their support for Israel. And ideally, Trump’s strong backing for Israeli hardliners will alienate liberal American Jews, so Israel will become more of a partisan issue.”

While most commentators agree that Obama would not have abstained from the U.N. vote if Clinton had won the general election, little consensus has emerged on his reasons for doing so in the face of Trump’s looming inauguration.

Some have sought to contextualize the move within Obama’s rush to “Trump-proof the White House,” suggesting it would make it harder for the president-elect to fulfill his repeated pledges to move the U.S. Embassy in Tel Aviv to Jerusalem.

Others attribute it to the well-known personal animosity between Obama and Israeli Prime Minister Benjamin Netanyahu, who reacted with predictable fury.

But in the aftermath of a devastating loss for Clinton, whose campaign Obama publicly, if cautiously, criticized – even claiming that he “could’ve mobilized a majority of the American people” himself – the president may have sought to realign his Democratic administration’s policy with the sentiments of its political base, sharpening its distinctions from incoming Republicans and increasing the party’s chances of future victories.

Whether or not Obama intended to rebuke failed plans to trade actual Democratic voters for hypothetical Republican crossovers — most clearly articulated by Sen. Chuck Schumer, a Democrat from New York who is now the Senate minority leader — his abstention will nevertheless have the practical effect of nudging his party toward the sentiments of those inclined to actually support it.

And with Trump already facing unprecedented disapproval, even as he enjoys a personal record in popularity, any policies he implements against Palestinians — including the maintenance of the status quo — will likely inspire stronger opposition than similar actions by earlier presidents.

This could make it even harder for future Democratic candidates to maintain the lockstep support for Israel long championed by Clinton, and now upheld by Trump.

“Once you show that too much support for Israel can be politically harmful, much of what the U.S. does to prop Israel up will fall apart,” Feld said.