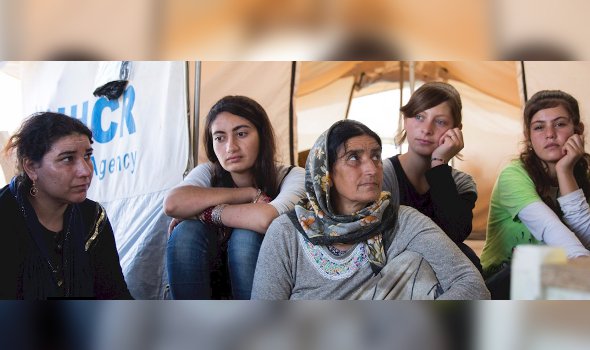 Two years ago, the armed group calling itself Islamic State (IS) swept across northern Iraq in a systematic campaign of ethnic cleansing against minority communities.

They abducted thousands of Yezidi men, women and children forcing them to convert to Islam and killed hundreds of men in cold blood. Captured women and girls were subjected to torture, including rape, forcibly married, ‘sold’ or given as ‘gifts’ to IS fighters or their supporters and forced into sexual slavery. Boys were separated from their families and sent to training military camps.

An estimated 3,800 Yezidi women and children still remain captive. Hundreds of thousands are internally displaced in Iraq. Many others became refugees.

‘Islamic State came to Sinjar; they started to kidnap women and children. We had to run away; our houses were destroyed’
By the time we visited Nea Kavala refugee camp in Greece in July there were around 400 Yezidi men, women and children staying there, living in dreadful conditions with some 2,000 other asylum seekers, waiting as the rest of Europe drags its heels on the refugee crisis.

They had been sleeping in tents for months in filthy conditions, exposed to insects, snakes and very high summer temperatures. While able to survive with the food rations delivered by the Greek army, they told us the food is terrible and they don’t have enough drinking water.

The army and the police were sitting at the entrance to the camp as we arrived. Some containers hosting the offices of the Greek army lay beyond. A paved road separated the containers from the rows of tents, deployed in line. The first tents were occupied by Yezidis, many of whom warmly welcomed us.

Amid the stifling heat inside and outside their tents, Yezidis told us their horrific stories of flight. Struggling to survive, they crossed mountains and borders but found only misery in camps in Turkey. They continued their journey in search of protection, forced to pay smugglers to cross the Aegean Sea, only to find themselves trapped in Greece, the borders of Europe closed to them.

The journey was especially harrowing for elderly Yezidi women like Sarif. Sarif is blind and her family told us she is more than 100-years-old. Her son carried her on his back all the way from Iraq to Turkey.

Bahar Salaman, is 91-years-old and suffers heart problems. She couldn’t walk either, but travelled with her family and crossed the Aegean Sea, known as the ‘sea of the death’ by some Yezidis because it has swallowed so many refugees. 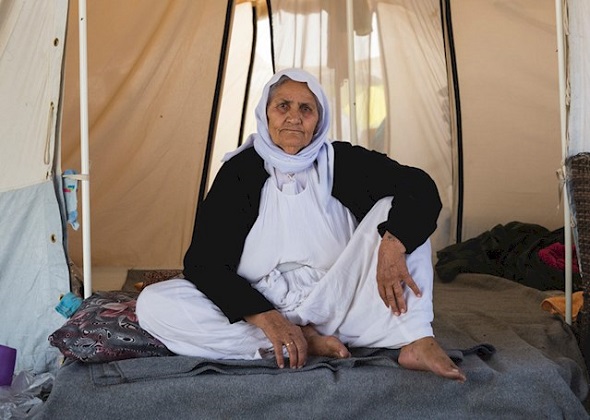 The war has not only shattered lives but has also undermined the co-existence of different communities. Tensions and distrust among the Yezidis and other groups living in the camp were rife.

Yezidi men were organizing shifts at night, fearing attacks by other asylum-seekers.

We also met Kurtey, Ghazal, Karmey, Beshey and Noorey. They told us, ‘we are scared of fights, we don’t feel safe in the camp.’

‘We don’t use the showers in the camps. We have built instead a Hamman next to our tents’
To support themselves, they had formed a ‘protection circle’, finding strength in unity, accompanying each other to the bathroom.

The trauma of the war was a living and painful memory. Karmey broke into tears when she remembered how she was forced to flee with two of her children, but had to leave the other three in Iraq.

All the Yezidi community, both men and women, felt that the Greek police were doing nothing to protect them from incidents in the camp. This view was shared equally by asylum-seekers of other nationalities in the camp. 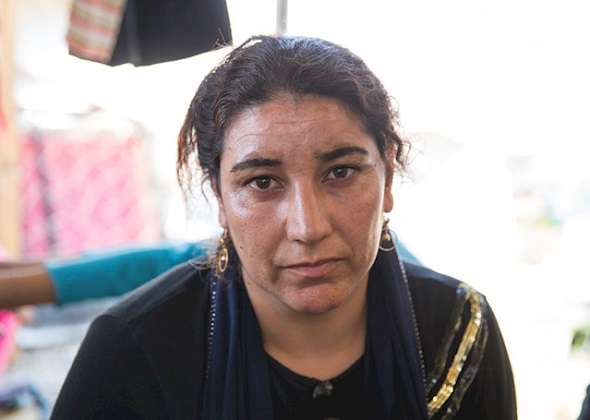 ‘We spend the day thinking, depressed, just moving between tents.’

However, all of them agreed that the main problems are insecurity and lack of education for their children.

Before we didn’t have anything, but at least we had education. We were living on our hope but now our hope is broken
After arriving in Greece and spending more than five months in Nea Kavala camp, Yezidis feel they have been forgotten and neglected by the world.

Many are still waiting to be relocated or reunited with family members in other European countries. But the wait is too long and – for them – unbearable.

The uncertainty is devastating their collective aspirations to remain together as a community. Yezidi asylum seekers have survived brutal abuses by IS, travelled thousands of miles to escape, but now find themselves overlooked by European leaders. Yezidi women boldly told us: ‘We want our voices to be heard by all European leaders. Get us out of the camp, out of Greece.’ 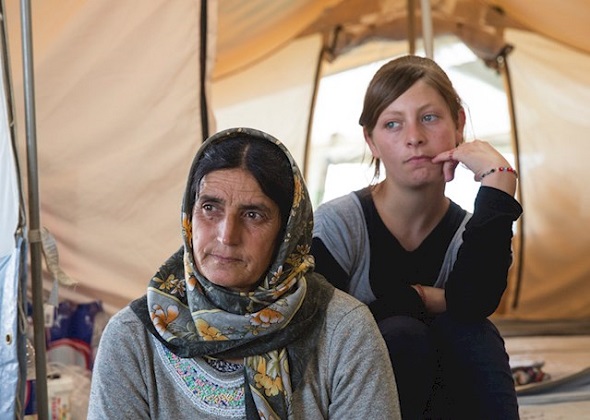 © Amnesty International (Photo: Richard Burton)
Kurtey Ismaed © Amnesty International (Photo: Richard Burton)
However, the Greek government must immediately and urgently address the prevailing insecurity in some of the camps and provide asylum seekers with adequate shelter and care. They should also ensure that there are separate and safe facilities for women and girls.

At the beginning of this month, just days after I had met them, the Yezidis decided to leave Nea Kavala. Over 400 of them spent two nights sleeping rough before finally being moved to a new camp, Dimitra.

Two years after IS drove them from their homes, the Yezidi women we spoke to remain in Greece. Here on European soil they await the day that they can be reunited with their families or relocated elsewhere in Europe and a time when they can finally feel safe again.

Maria Serrano is a Campaigner at Amnesty International.