From comrade to caudillo 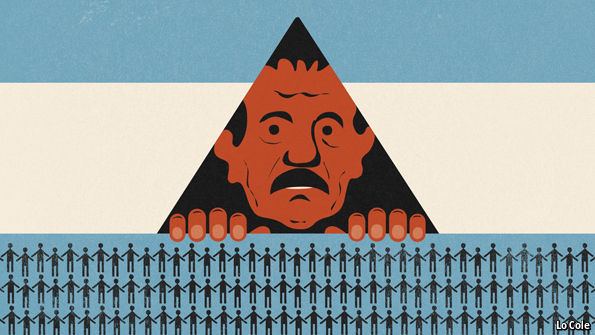 IT MAY be small and poor, but Nicaragua claims a comparative advantage in poetry. Its people celebrated this year the centenary of the death of Rubén Darío, who is widely held to have brought Spanish-language verse into the modern age. “In Nicaragua everybody is considered to be a poet until he proves to the contrary,” wrote Salman Rushdie, a British novelist. In a brief trip to the country during the Sandinista revolution, which toppled the dictatorship of the Somoza dynasty in 1979, he kept bumping into versifiers. They included one Daniel Ortega, whose most memorable ode was entitled “I never saw Managua when miniskirts were in fashion”, written when he was in jail.

The Sandinista revolution inspired a generation of leftists around the world. Its Marxism was leavened by Christian liberation theology and an idealistic commitment to social justice. Never mind that it was backed with Fidel Castro’s arms and know-how. To its fans, Sandinista Nicaragua was a saintly David which, having overthrown a brutal and corrupt regime, was then besieged by the Contras, armed by the United States Goliath. Thanks to the ebbing of the cold war and outside pressure, the revolution’s most obvious legacy was to create a democracy—“although this was not its most passionate objective”, as Sergio Ramírez, the Sandinista vice-president and an accomplished novelist, wrote in a memoir.

Mr Ortega, who had led the Sandinista government, lost an election in 1990. Back in the presidency since 2007, he has turned Nicaragua into an elected dictatorship and the Sandinista party into his personal fief. Only one among the six other surviving commanders of the revolution still supports him. Thanks to a pact with a corrupt Conservative leader, Mr Ortega took control of the supreme court and the electoral authority, and knocked down a ban on presidential re-election.

Now he has gone a step further. Earlier this year, the supreme court awarded control of the main opposition party, the Independent Liberals, to a surrogate of Mr Ortega. Because they rejected the change, last month 16 of the 26 opposition members in the 92-seat National Assembly were expelled, and Eduardo Montealegre, Mr Ortega’s chief opponent, has been deprived of the Liberals’ presidential candidacy.

An election on November 6th, at which Mr Ortega will seek a third consecutive term, has thus become a charade. “We’re moving to a single-party regime with ever fewer freedoms,” Mr Ramírez told Confidencial, a website. Not even Nicolás Maduro, Venezuela’s dictatorial president, has dared shut down his country’s opposition in this manner.

Unlike Mr Maduro, Mr Ortega is popular. The former socialist’s formula for success is based on crony capitalism. He set up social programmes financed at first with Venezuelan money and now with loans from multilateral banks. Nowadays he is friendly to the private sector and his economic policy is prudent. The revolution created an effective police force, so there is little violent crime. Though Mr Ortega still denounces American imperialism rhetorically, Nicaragua remains in the Central American Free-Trade Agreement with the United States, which has allowed it to create a large garment industry. For the past five years the economy has grown at an annual average rate of 5.2%.

Behind the scenes the government is run by Rosario Murillo, Mr Ortega’s wife (who, inevitably, also claims to be a poet). They keep a tight hold on the country through Cuban-style Councils of Citizen Power, which have taken over some of the functions of elected municipal councils. By naming his wife as his running mate this year Mr Ortega, who is 70 and rumoured to be ill, signalled that he wants to keep power in the family. In this dynastic reflex, Mr Ortega resembles the Somozas. So, too, does the corruption surrounding a rather whimsical project for a transisthmian canal.

What is to be done about Mr Ortega’s dictatorship? His coup against the opposition has received far less attention than Mr Maduro’s disastrous authoritarianism in Venezuela. Ileana Ros-Lehtinen, a Republican congresswoman from Florida, has introduced a bill that would require the United States to vote against multilateral loans to Nicaragua. But even if this were implemented it would hurt Nicaraguans rather than the Ortegas—that is the lesson of the Cuban embargo.

Nicaragua is not Venezuela. It poses no threat to its neighbours, nor is it a humanitarian tragedy. The most useful thing outsiders can do is to denounce Mr Ortega’s dictatorship publicly and succour, as best they can, its opponents. Nevertheless, November 6th will be a sad day for Latin American democracy.