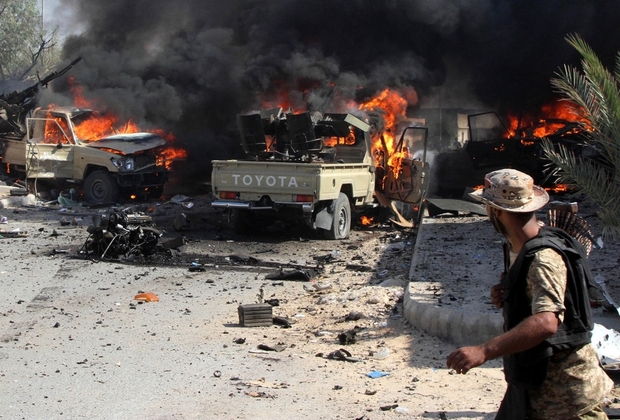 Air force units of Libya’s unity government launched an operation on Saturday to cut off potential escape routes for militants holed up in the coastal city of Sirte, loyalist forces said.

The forces of the Government of National Accord (GNA), on their Facebook page, said the surveillance operation covered central Libya as well as the western region up to the border with Tunisia.

Pro-GNA forces, backed since early August by US air strikes, began an assault in mid-May to expel the Islamic State (IS) group from its Sirte stronghold.

They fought their way into Sirte on June 9 and have since faced a barrage of sniper fire, suicide bombings and booby traps, but have pinned down the militants in a downtown area near the sea.

More than 350 pro-GNA fighters have been killed and nearly 2,000 wounded in the battle, according to medical sources. IS casualties figures are unavailable.

Sirte itself has been emptied of its residents, apart from families of IS militants, according to the pro-GNA forces.

Pentagon spokesman Gordon Trowbridge in mid-August estimated that IS militants in Sirte numbered fewer than 1,000.

While defeat in Sirte will be a critical blow, it will not be the end of Libya’s militant threat. Some were able to flee Sirte before it was encircled and are likely to try to reactivate elsewhere in Libya, officials and fighters say.

Militants may link up with existing cells and armed factions already operating in other regions, as the divisions that fuelled militancy in Libya persist and even risk worsening as a result of the Sirte campaign.

Officials have given few details on militants detained or killed in the battle for Sirte, saying they find it hard to trace those who use different identities and that resources to track and intercept fugitives are scarce.

But according to Mohamed Gnaidy, a military intelligence official in Misrata, a western Libyan city, about a dozen militant commanders and hundreds of more junior fighters may have slipped away.

That does not mean IS will resurface openly in another Libyan town, Gnaidy and other officials said. But the group could stage revenge attacks or wage an insurgency, operating sleeper cells in urban areas and forging new alliances in the vast open spaces of the south.