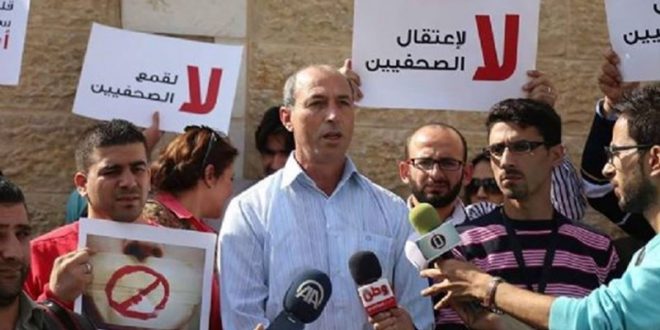 The captive’s wife, Marline, said that the extension decision was issued for three months for the second consecutive time. She revealed that her husband, who is detained in solitary confinement in Ofer Israeli jail, was supposed to be released next Monday.

The family has no idea about his health condition in light of his continuation of hunger strike for 16 days in a row in solidarity with prisoner Bilal Kayed, she added.

The wife also pointed out that the Red Cross and the lawyer of her husband have been banned from visiting her husband since August 04. Human rights institutions condemned the arrest of Nazzal and perceived it as a violation of journalists’ rights.

They urged the UN Security Council and the EU along with all concerned syndicates to work on releasing Palestinian pressmen from Israeli prisons. On April 23, Israeli forces arrested Nazzal at al-Karama crossing, which connects the West Bank to Jordan, while he was heading to Bosnia to attend an international journalism conference.