From Bathroom Bills To Islamophobia: It’s All Connected In America’s Anti-Diversity Backlash

July 16, 2016February 23, 2021 by Milena Rampoldi
AUSTIN, Texas — From anti-Muslim legislation to violence
targeting mosques and those who worship there, it’s clear that Islamophobia is
on the rise in the United States.
While
opponents of Muslims’ religious freedom often cite terrorist attacks carried
out by religious extremists to justify their bigotry, analysis of the sources
of Islamophobia reveal ties to broader, national issues of systemic racism and
xenophobia in the U.S., and the people who stand to profit from fomenting hate.
A
November poll by the Brookings Institution showed that 61 percent of Americans hold an
unfavorable view of Islam and 46 percent hold an unfavorable view of Muslims.
And
compared to other forms of hate speech, anti-Muslim speech remains surprisingly
acceptable. Saeed Khan, a fellow at the Institute for Social Policy and
Understanding and a professor at Wayne State University in Detroit, told
MintPress News:
“When it came to the rhetoric against Muslims
… it was one of the few communities or groups by which politicians and opinion
makers could speak with impunity against without facing any kind of
repercussions either politically or economically.”
Khan
co-authored “Manufacturing Bigotry: A
State-by-State Legislative Effort to Pushback Against 2050 by Targeting Muslims
and Other Minorities,”
a 2014 report and interactive map from the institute which identify key
areas of overlap between legislation targeting Muslims and bills that seek to
disenfranchise other minority groups.
Khan puts
anti-Muslim rhetoric in the context of a larger “moral panic” — a social,
political, and cultural backlash against the changing face of America that’s
only grown stronger in the current election cycle.
Islamophobia:
‘A symptom of a broader disease’
In a 2013
analysis for The Islamic monthly, media expert Dalia Mogahed declared that “Islamophobia is made up.”
She found that anti-Muslim bigotry is linked not to any actual terrorist
attacks, but to political expediency.
“[W]hat
if I told you anti-Muslim sentiment is almost entirely independent of the
events of international conflicts, or even terrorist acts on U.S. soil, and
much more tightly linked to election cycles and building domestic consent?” she
wrote. 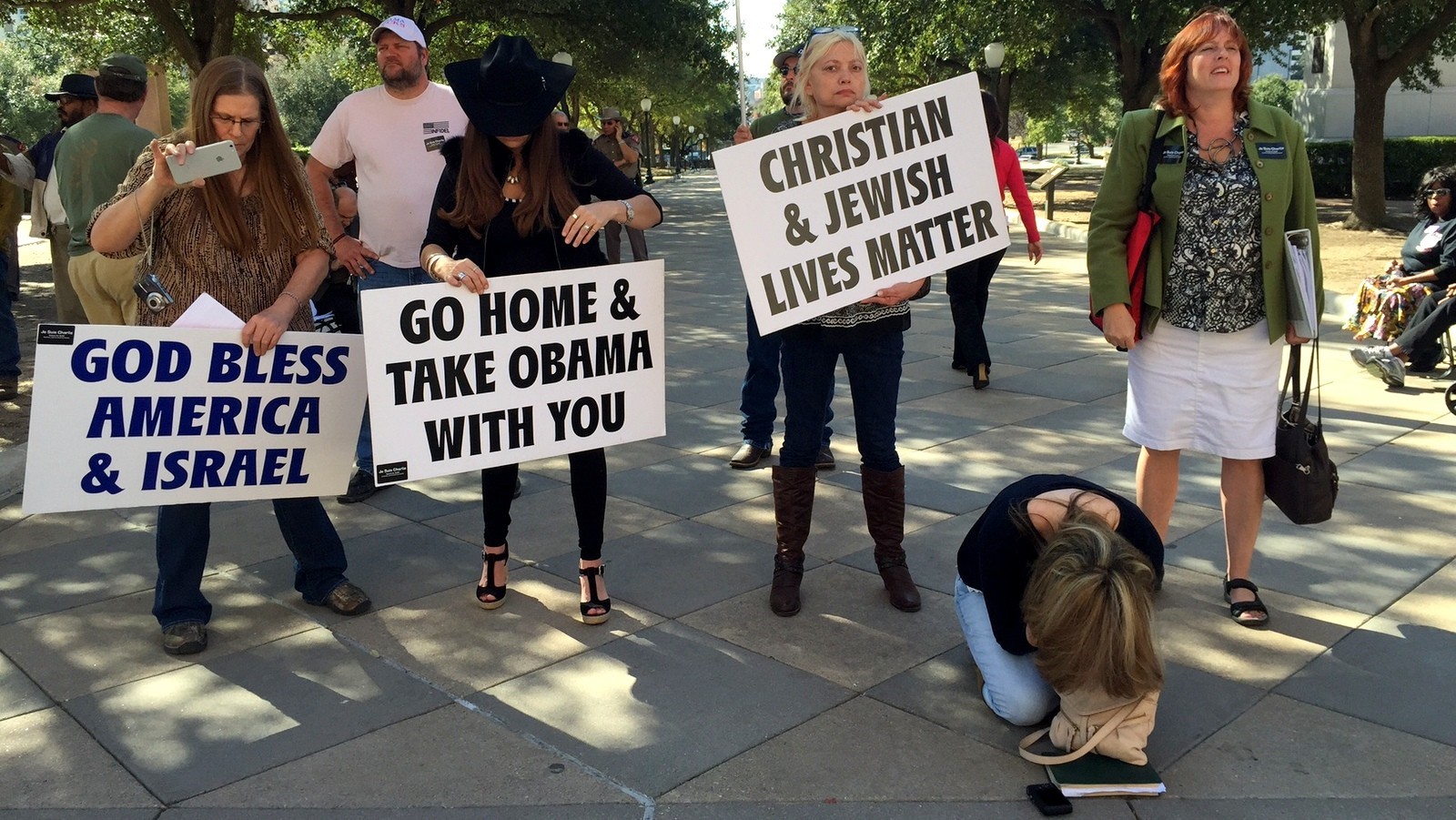 Protesters attend an anti-Muslim rally at
the the Texas capitol. Brittney Martin/The Dallas Morning News
And
according to “Manufacturing Bigotry,” Islamophobia serves as a wedge issue, a
politically acceptable form of hate speech that can open the doors to other
attacks on minorities.
In their
report, Khan and his co-author, Alejandro Beutel, begin by examining
anti-Muslim bills passed or proposed by state legislators between 2011 and
2013. In the process, they identify six key issues of legislative overlap in
the U.S. “culture wars” — meaning that if a state legislator supported a bill
related to one issue that in some way disenfranchises a segment of America’s
increasingly diverse population or aims to curtail civil liberties, he or she
was likely to support other causes with similarly restrictive aims.
The
report identifies 102 anti-Sharia laws passed during the three-year period,
which formed the basis of their study. Sharia is traditional Islamic law, and
these laws purport to ban the practice of “foreign laws” on U.S. soil. But, as
the report notes, the sponsors of those bills and other “anti-Muslim activists
most frequently engage in alarmist rhetoric and typically have little to no
formal education and expertise in Islamic studies.” Since U.S. law already
supersedes any foreign or religious laws, many believe these billsactually serve to amplify
Islamophobia.
Khan and
Beutel revealed that just 16.5 percent of the country’s Republican legislators
had sponsored or co-sponsored at least one of these 102 anti-Sharia or
anti-”foreign law” bills.
“However,
a relatively small number of lawmakers, 480 out of 3813 (12.6%) Republican
state legislators are sponsors of restrictive bills proposed in more than one
issue area,” they wrote. “This indicates that, more than ‘red vs. blue’
politics, this is a ‘red vs. red’ issue, reflecting internal disagreements
within the Republican Party at the state-level.”
Further, 80
percent of the anti-Sharia bills were sponsored or co-sponsored by a sponsor of
a bill from one of the five other overlapping areas: bills that limit LGBT
rights; bills that limit access to abortion; voter ID bills; anti-immigration
bills; and “right-to-work” or anti-union legislation.

The authors added:
“It is critical to note that the greatest
overlap with anti-sharia/anti-’foreign law’ legislation is not with
anti-immigration laws as might be thought but with strict Voter ID laws and
Right-to-Work laws. Both of these types of laws negatively and
disproportionately impact African-Americans, women and Latinos. Thus, if a
lawmaker wants to support legislation marginalizing the most people at one
time, antisharia [sic] along with Voter ID and/or Right-to-Work would help to
achieve that end.”
Speaking
to MintPress, Khan noted “the curious case of North Carolina,” in which a bill
combined two of these overlapping issues into a single piece of legislation. In
2013, faced with little resistance to an anti-Sharia bill, legislators added multiple
extreme abortion restrictions to
the law as amendments.
“I
started to wonder whether all of this venom against Muslims was really because
of Muslims or whether it was a deflection from other anxieties,” recalled Khan
of his research.
He
realized that all the overlapping issues they’d identified either
disenfranchise minority groups or otherwise reinforce the wealth and political
power of the country’s current, mostly white Protestant majority, at a time
when the country is undergoing a major demographic shift.
The U.S.
is “becoming less white and more brown, less Anglo-Saxon and more Latin, less
Protestant and more Catholic,” Khan said, echoing data showing that non-white births already
outnumber white births,
and members of other religions now
outnumber Protestants.
In 2012, the Census Bureau estimated
that the U.S. would become a “majority-minority nation,” where whites no longer represent a
majority of the population, as soon as 2043. Khan told MintPress:
“People call Islamophobia a disease. I tended
to disagree with that. I saw that it was actually a symptom of a broader
disease, of this moral panic of people really frightened as to where America
was going and the uncertainty of that future, particularly as it pertained to
the majority-minority attainment within a generation.”

The
issues Khan and Beutel identified in 2014 have grown even more relevant in
2016, a year marked by campaigns rife with anti-immigrant and Islamophobic speech.
“If there
are politicians who, for example, can go ahead and demonize entire swaths of
people and then present themselves as lord protectors or people with the
ability to do something about it, that becomes infectious,” Khan warned.
And state
legislators continue to introduce laws targeting the same groups, although the
specific details of their bills tend to change over time.
For
example, Jodie Laubenberg, a Republican state representative from
Dallas, was a key sponsor both of HB2, the anti-abortion bill recently partially overturned by the
Supreme Court,
and of Texas’ 2015 anti-foreign
laws bill.
She’s also served as the state chair of the American Legislative Exchange Council, suggesting the influence of right-wing think
tanks that write many of these bills, which are then introduced by what Khan
calls “Koch Brothers-sponsored and -purchased politicians.”
And with
the legalization of gay marriage in the U.S., attacks on LGBT rights have moved
on to so-called “religious liberty”
bills and laws that would limit
transgender access to public restrooms. North Carolina’s controversial
anti-transgender “bathroom bill” also targeted labor rights by blocking minimum wage increases. John Kavanagh, the Arizona state senator who
had authored a previous failed attempt at a transgender
bathroom bill,
authored a bill this year that would block the census from counting
undocumented immigrants. Kavanaugh also infamously told
racist jokes at the expense of Muslims and Latinos at a 2014 “roast” of Joe Arpaio,
the controversial sheriff of Maricopa County, Arizona.

“There’s
a lot of profit in paranoia,” Khan told MintPress. “I think that the idea of
fomenting fear and then people being able to exploit that fear in a particular
direction is very, very lucrative for people who have certain agendas.”
“The fact
that it can occur on a state and local level means that it can be
custom-tailored in rhetoric on issue and on priority to each of these states
without having to be … one size fits all on a national level,” he added.
“Confronting Fear: Islamophobia
and its Impact in the U.S. 2013-2015,” a report published last month by the Council on American
Islamic Relations, identifies 33 key organizations that support Islamophobia in
the U.S. which had access to over $205 million in funding between 2008 and 2013.
Faced
with the massive financial war chest of its opponents, “Confronting Fear”
highlights coalition-building across intersecting issues as a key strategy for
pushing back against Islamophobia, including the areas identified by Khan and
Beutel.
“[‘Manufacturing
bigotry’] highlights the need for unity among the different targeted
communities,” said Corey Saylor, director of CAIR’s Department to Monitor and
Combat Islamophobia and the author of “Confronting Fear,” in an interview with
MintPress.
Khan
suggested the reaction to the Pulse Nightclub shooting, in which Omar Mateen fatally
shot 49 people and wounded 53 others at an LGBT club in Orlando, shows this
concept is already in action. He told MintPress:
“After what happened in Orlando, it was
remarkable how many people in the LGBTQ community spoke out reflexively and
very passionately saying, ‘We don’t hold the Muslim community responsible for
this.’ That is a direct consequence of channels of communication being
opened.”
Khan
acknowledged that coalition-building can be challenging for some conservative
Muslims when it comes to issues like abortion or the LGBT community, but he
believes more are “realizing that there are these bigger priorities that need
to occur when it comes to forming coalitions with people, and particularly when
it comes to targeted communities.”
In a
follow-up report, “Strength Through Diversity,” published November 2014, Beutel and Jelena
Jankovic analyzed several coalitions between Muslims and their allies that
successfully opposed anti-Muslim legislation
“Coalitions
are important to securing success,” Beutel and Jankovic wrote. “This report’s
findings reaffirm the need for organizations to work together to achieve a
particular goal.”
Khan
emphasized the diversity of issues that could be brought together under one
umbrella through solidarity and unity:
“Women are being targeted when it comes to
their reproductive rights by some of the very same individuals who are
targeting people of color, people based on their immigrant status, people based
on their religious classification, people based on their union status, people
based on their sexual orientation or gender identity. And how then to push back
on this? It is vital to go ahead and have the coalition build.”
Saylor
agreed, urging coalitions to bring their fight to the ballot box:
“I would also highlight that it needs to be
unity among the groups that are active in campaign issues. CAIR is a nonprofit,
we don’t get involved in issues, we can [only] do nonpartisan [voter]
registration. But you really need to get the groups that can be partisan allied
together and looking at those members of Congress that have been targeting
minorities.”