Life for many in Damascus, Syria is beginning to regain a sense of normalcy. Once besieged by foreign fighters, the ancient city and it’s residents struggle to rebuild their lives, land and livelihood, rejoicing in the simple mundanity of day-to-day life. 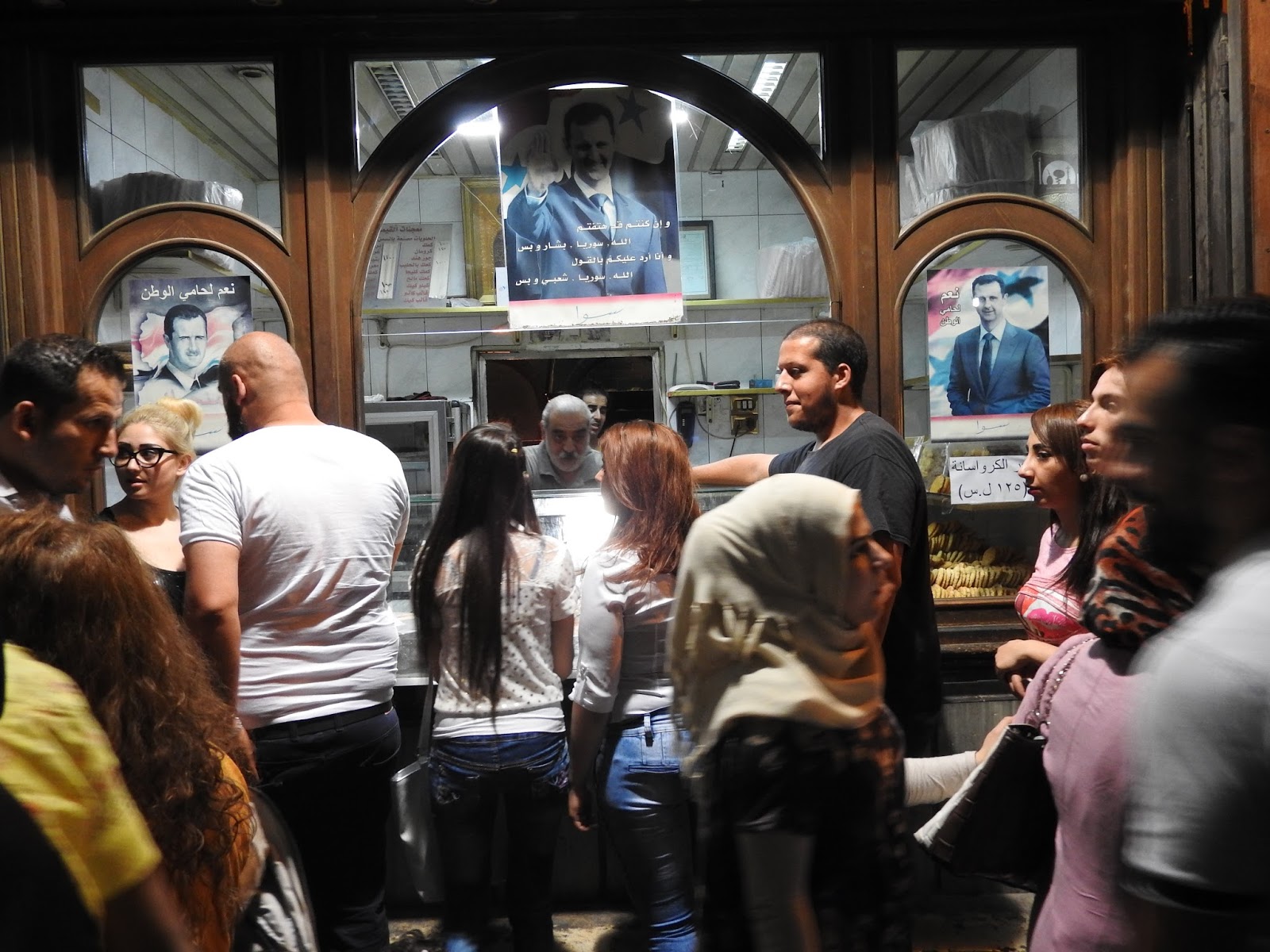 The croissant stand in Aamarie district of Thomas Gate is known not only to Damascenes but visitors from other areas of Syria. While prices for most goods have risen all across Syria, the stand keeps its prices low: 125 Syrian pounds per sumptuous croissant. On the first day of ‘Eid celebrations the stand is packed.
Damascus — On prior visits to Damascus, staying in the Old City, the sound of mortars being fired from terrorist-held districts outside of the city was a constant. In recent months, the mortars on Damascus have stopped. Previously, Jebhat al-Nusra (Al Qaeda in Syria), Jaysh al-Islam and the Free Syrian Army, among other terrorist factions, rained mortars daily on residential areas of Damascus, hitting schools, homes, vehicles and pedestrians, killing and maiming indiscriminately, leaving civilians, including children, withcritical injuries and amputations.
With the recent absence of mortars, Damascenes have opened outdoor establishments where before it was formerly too dangerous. Sidewalks cafes and outdoor eateries open at night were unthinkable less than half a year ago, let alone rooftop cafes and lounges. Although Syrians suffer immensely from an economy devastated by war and western sanctions, in Damascus there is a renewed sense of defiance, a refusal to give in, or as a young man in his twenties visiting from Aleppo said: “They have their own war against death by living.”
A snapshot of life in Damascus, June and July 2016: 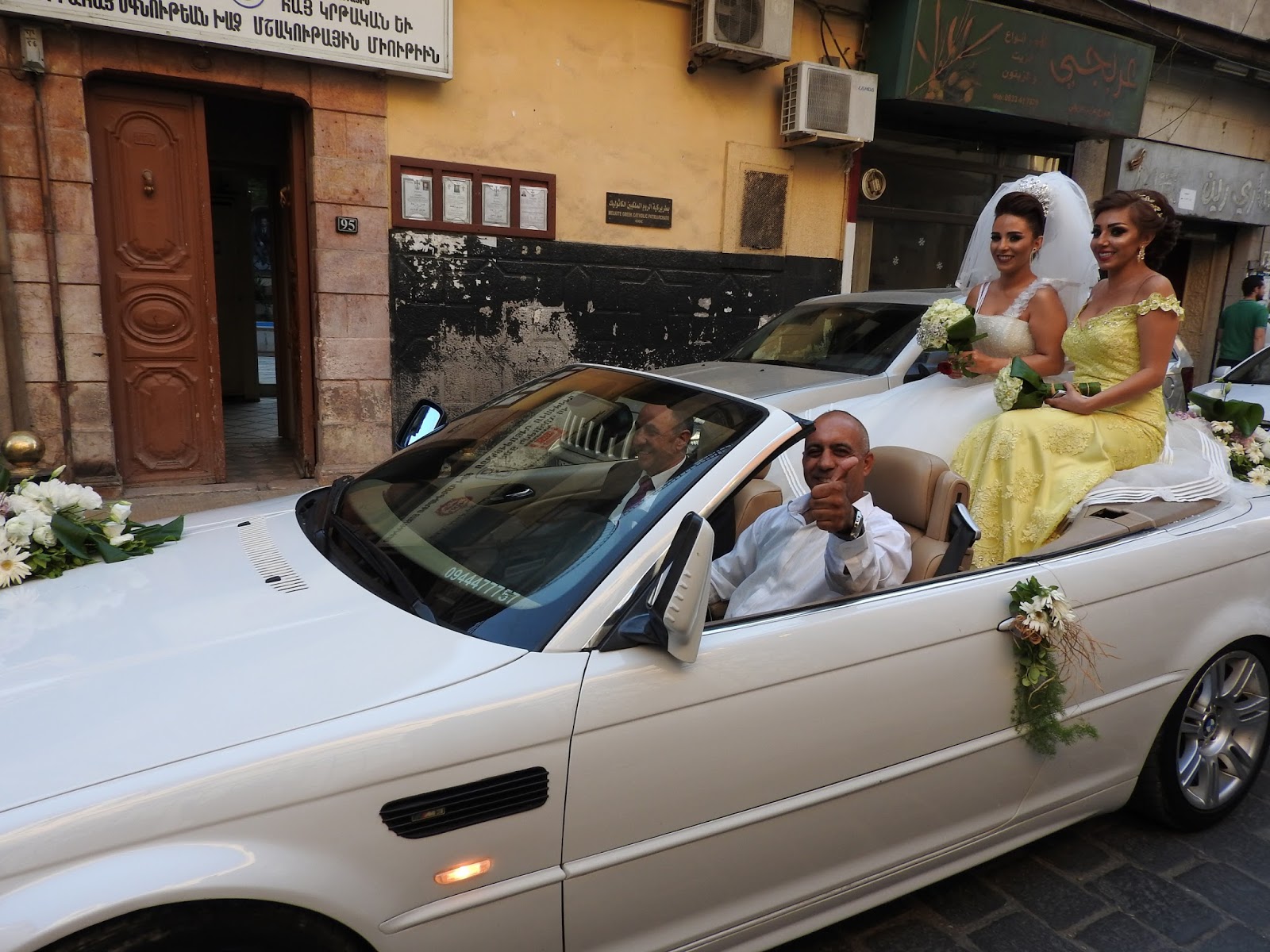 Wedding procession in the Old City of Damascus. Love and life continue. A newcomer to Syria might be surprised by the vibrancy of life among Damascus residents, who have lived under al-Nusra and Jaysh al-Islam mortars for years, as well as cruel sanctions. “Tawadna” is a phrase that is heard often in Syria: “We got used to it.” Even when mortars rained down, Syrians celebrated their weddings and festivals. Now, in Damascus at least, it is safer to do so outside. 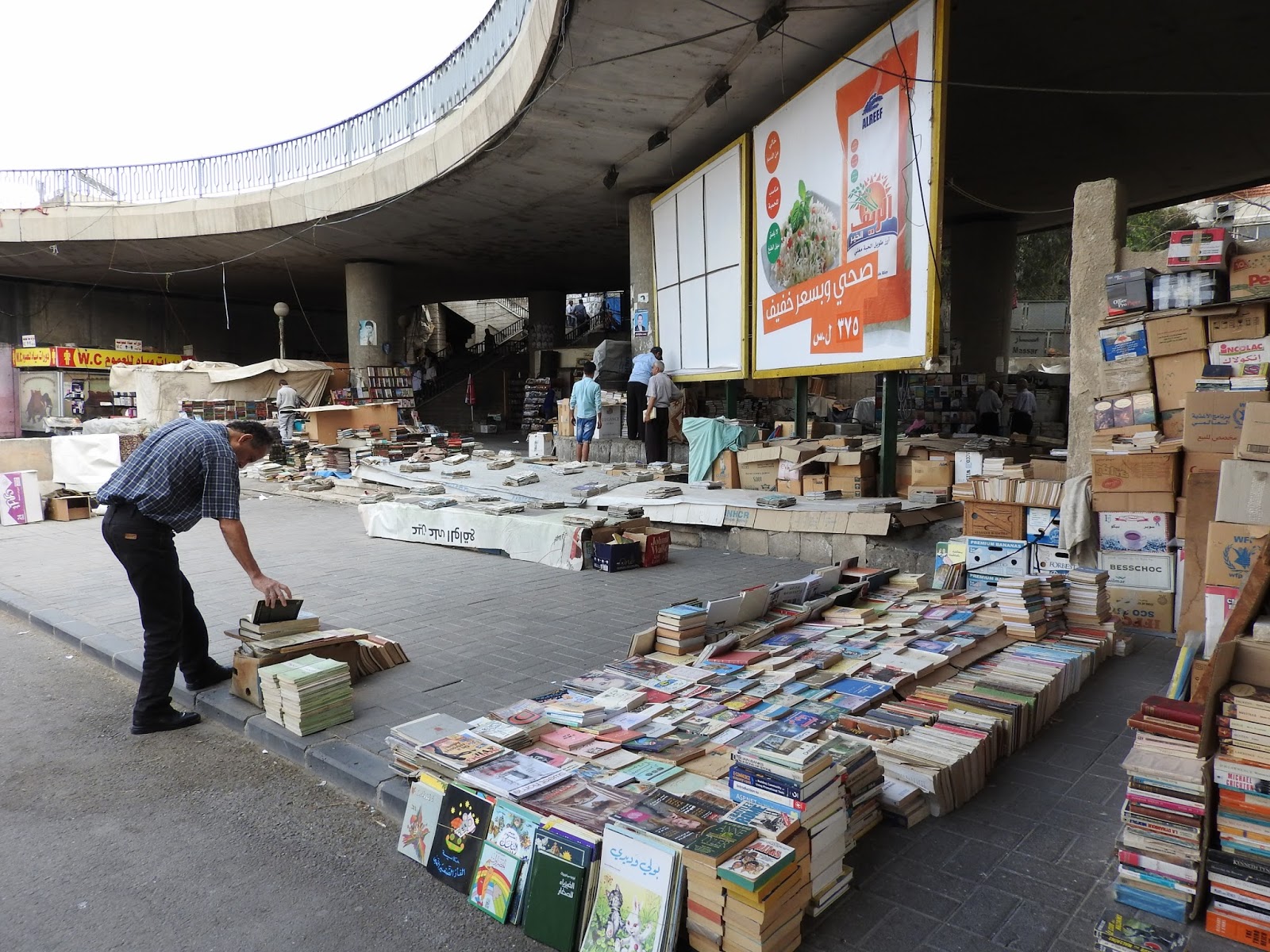 The book market near the President’s Bridge and Damascus Univeristy is an institution in Damascus, known to book lovers who can’t afford bookstores. It is one Damascus venue which refused to shut down over the years, mortars or not. In addition to its Arabic books, one can find English language books and cookbooks, English literature, popular English-language thrillers and taudry romance novels. 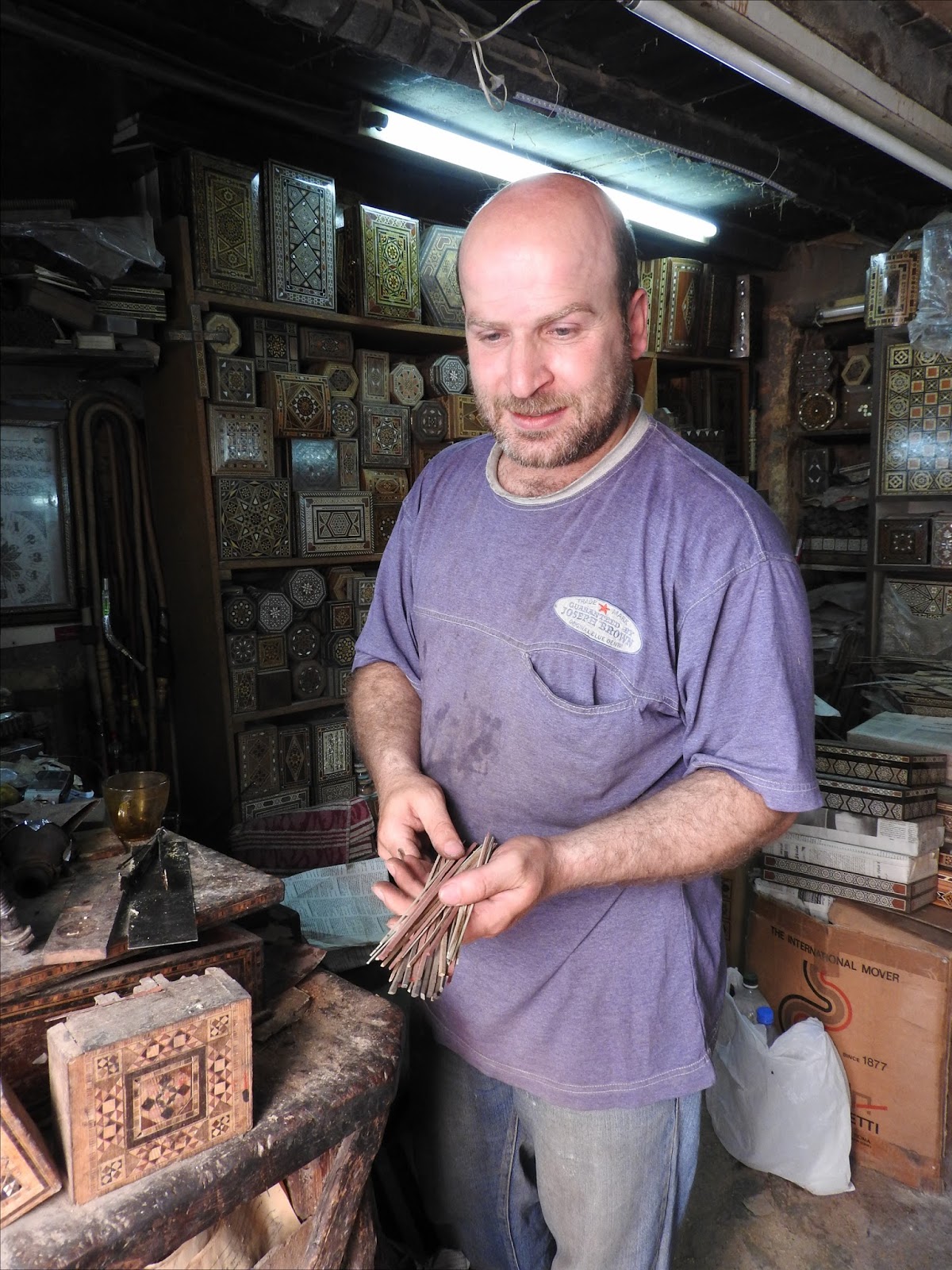 In the narrow lanes of Old Damascus, a wooden mosaic artisan explains the techniques of his trade. The tediously-crafted and beautiful woodwork is a favourite for tourists. In spite of the dearth of customers in the past five and a half years, craftsmen and women continue to practise their skills in hopes that when peace returns to Syria, so too will tourists. 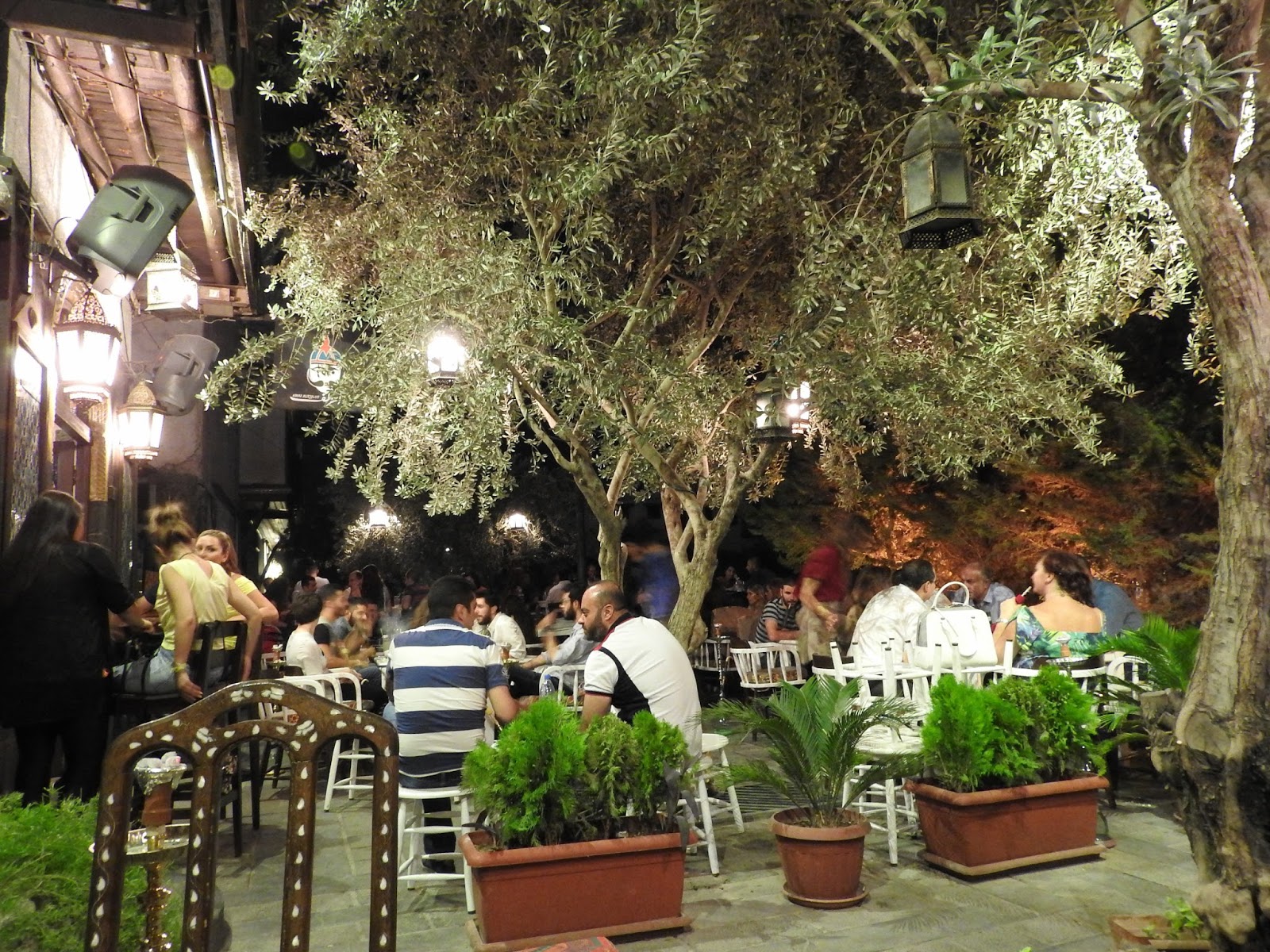 The Abu Zolouf bar is one among many bars and lounges opened in the East Gate quarter of the Old City in recent months. Two years ago, I sat with the adjacent restaurant owner, Nabil, outside his then-vacant restaurant discussing the frequent mortars that Jebhat al-Nusra and the Free Syrian Army were firing on Damascus, from Jobar, less than 1 km to the northeast. As mortars fell in nearby districts of the Old City, Nabil narrated close-calls he had had with such mortars hitting outside his restaurant. He also lamented the loss of customers in recent years. Since their May 30, 2016, opening, the Abu Zolouf bar has nightly from 70 to 150 patrons looking to relax outdoors. 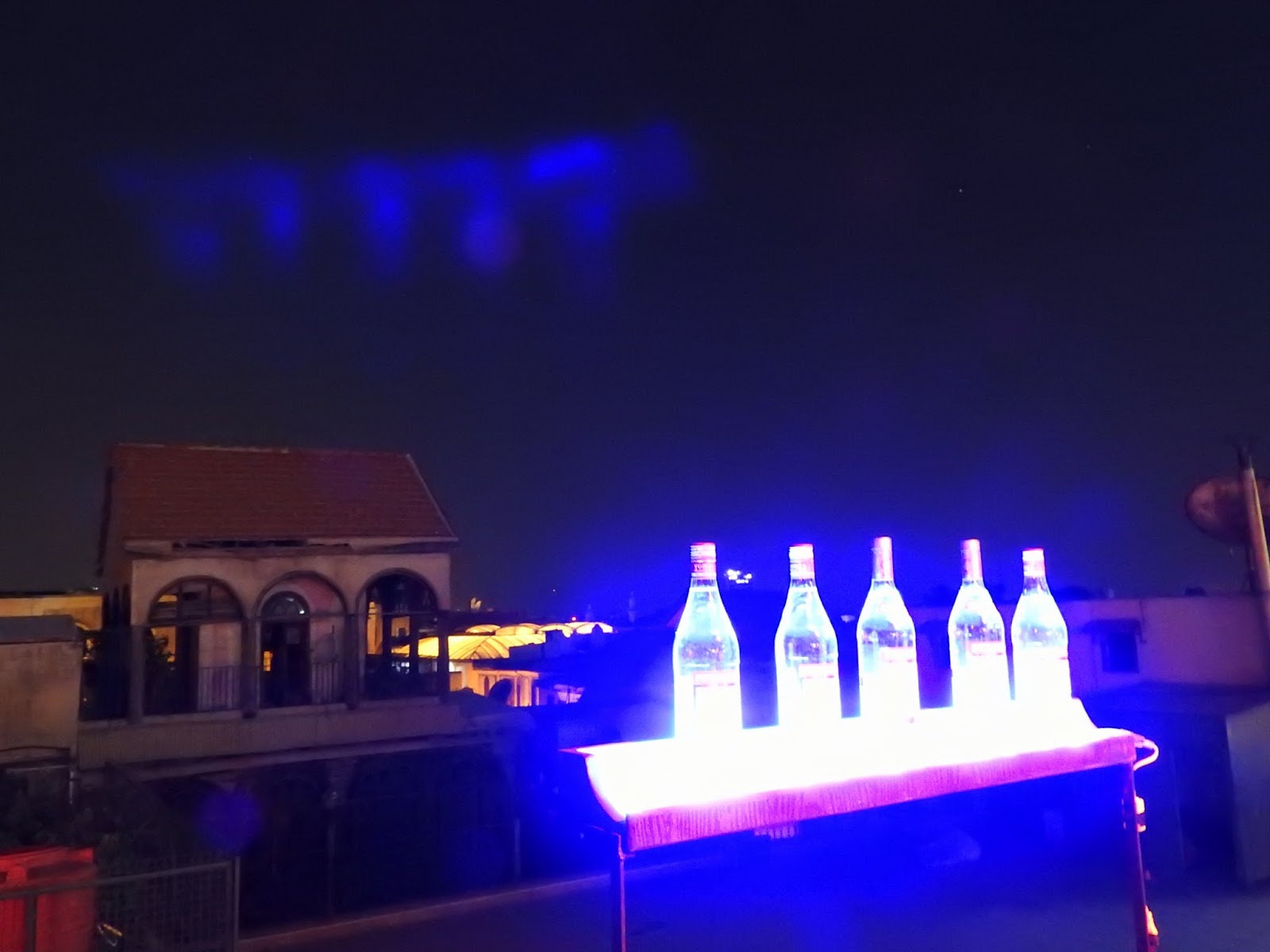 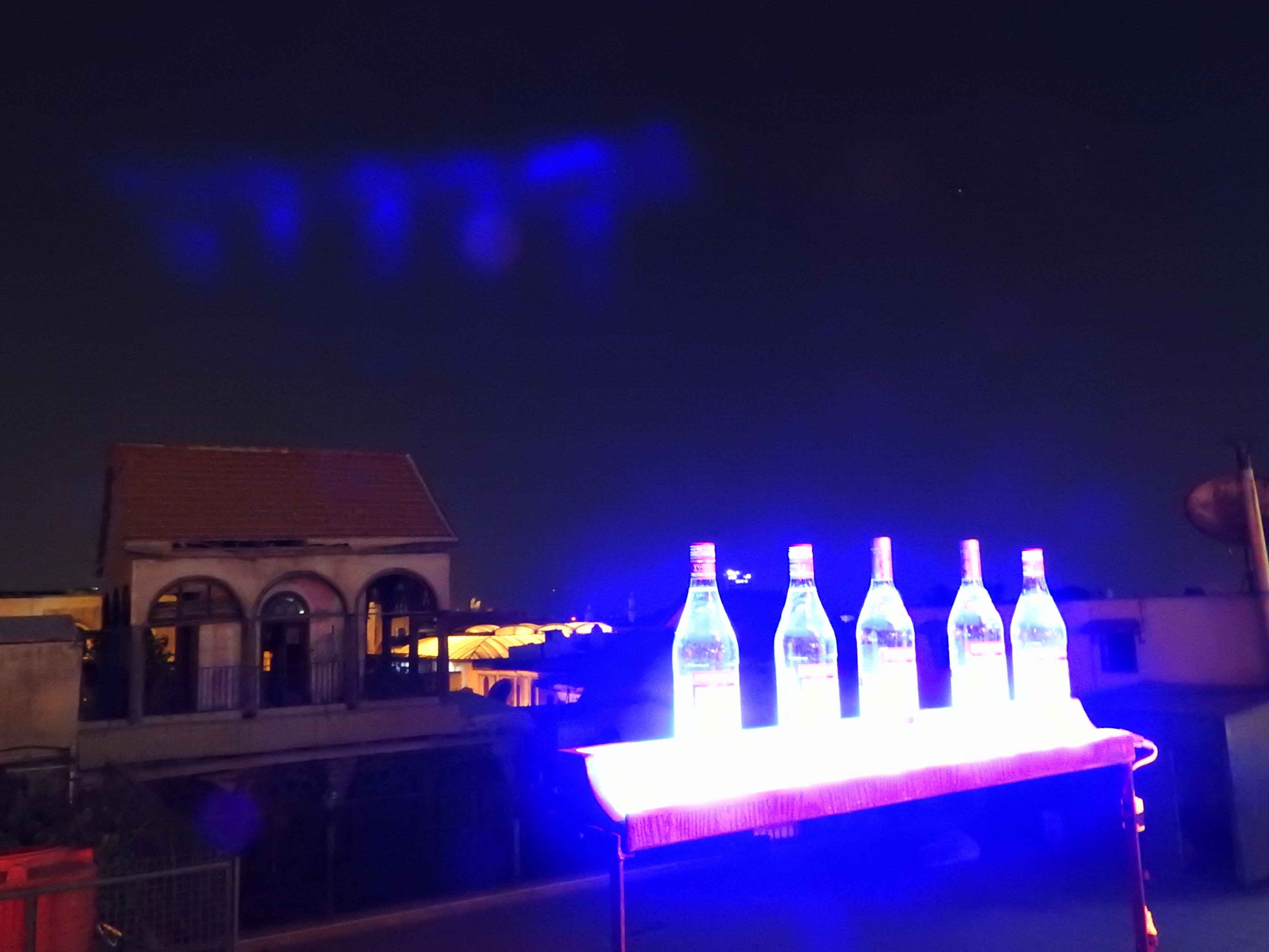 Le Visage, also in the East Gate quarter, was among the first outdoor establishment to open after the mortars stopped some months ago. From its rooftop position, one can look down on the historic Straight Street leading up to East Gate, as well as see life on balconies opposite, where months prior they were empty. A display of lighted alcohol bottles gleam in the dark, with Jobar less than 1 km beyond. A Damascus youth noted: “Imagine, ISIS are about 4 km away and we are opening new bars. This is the Syrian people.” 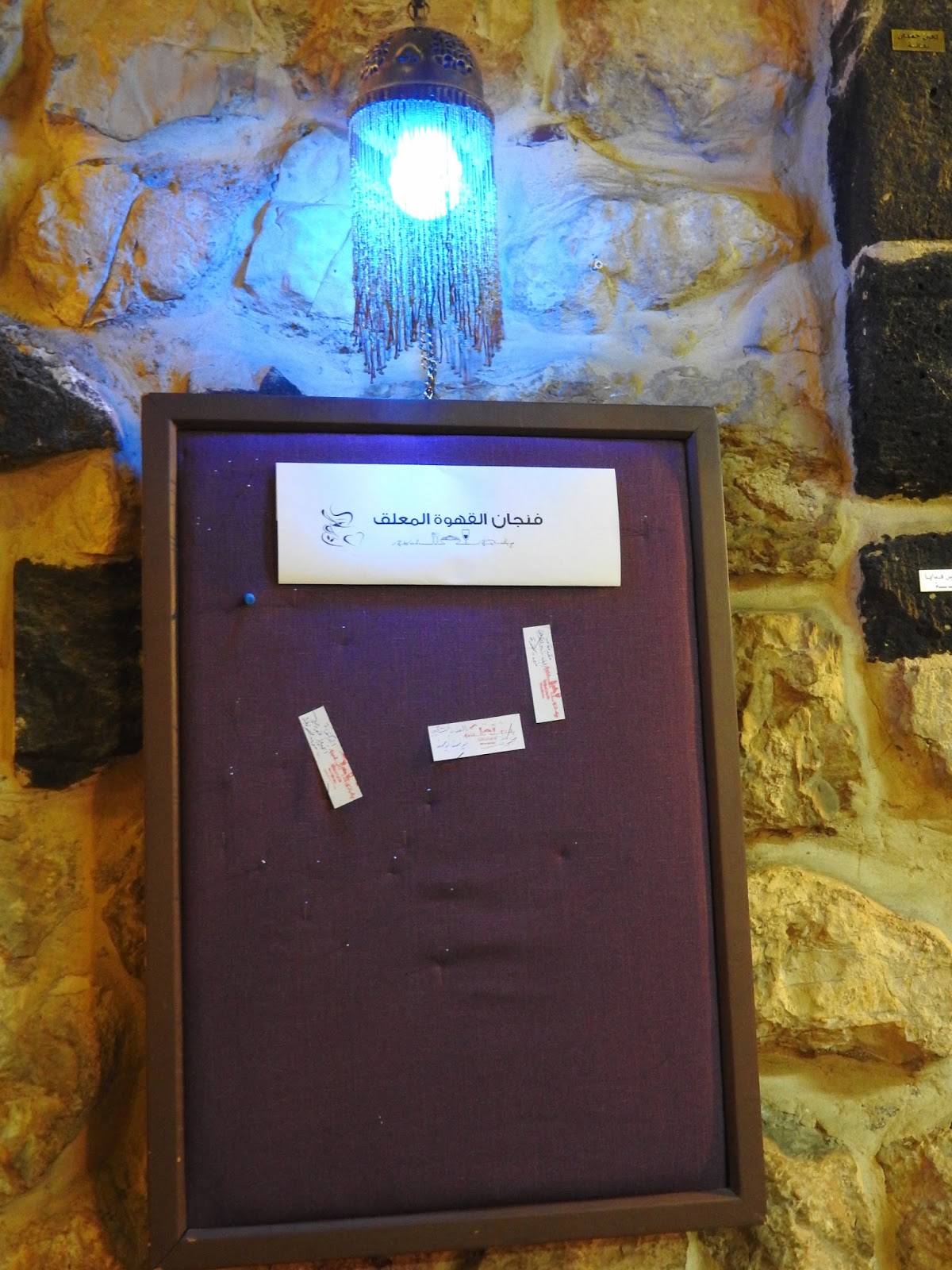 In an artsy restaurant along the Straight Street, stone walls are adorned with the owner’s brighly-coloured paintings and a solitary board with the words “Cup of Coffee Pending” at the top. Hekmat Daoud, an artist and prominent costume designer, also the eccentric hospitable owner of Kasida Dimashqia restaurant, employs a tradition he says is common in Naples, Italy. “When paying for their bill, people can pay extra towards free drinks for students or those too poor to afford one.” After a thirsty weekend, only a few promises of coffee remain. “There were more before, but students came and wanted arak and beer,” Daoud laughed. 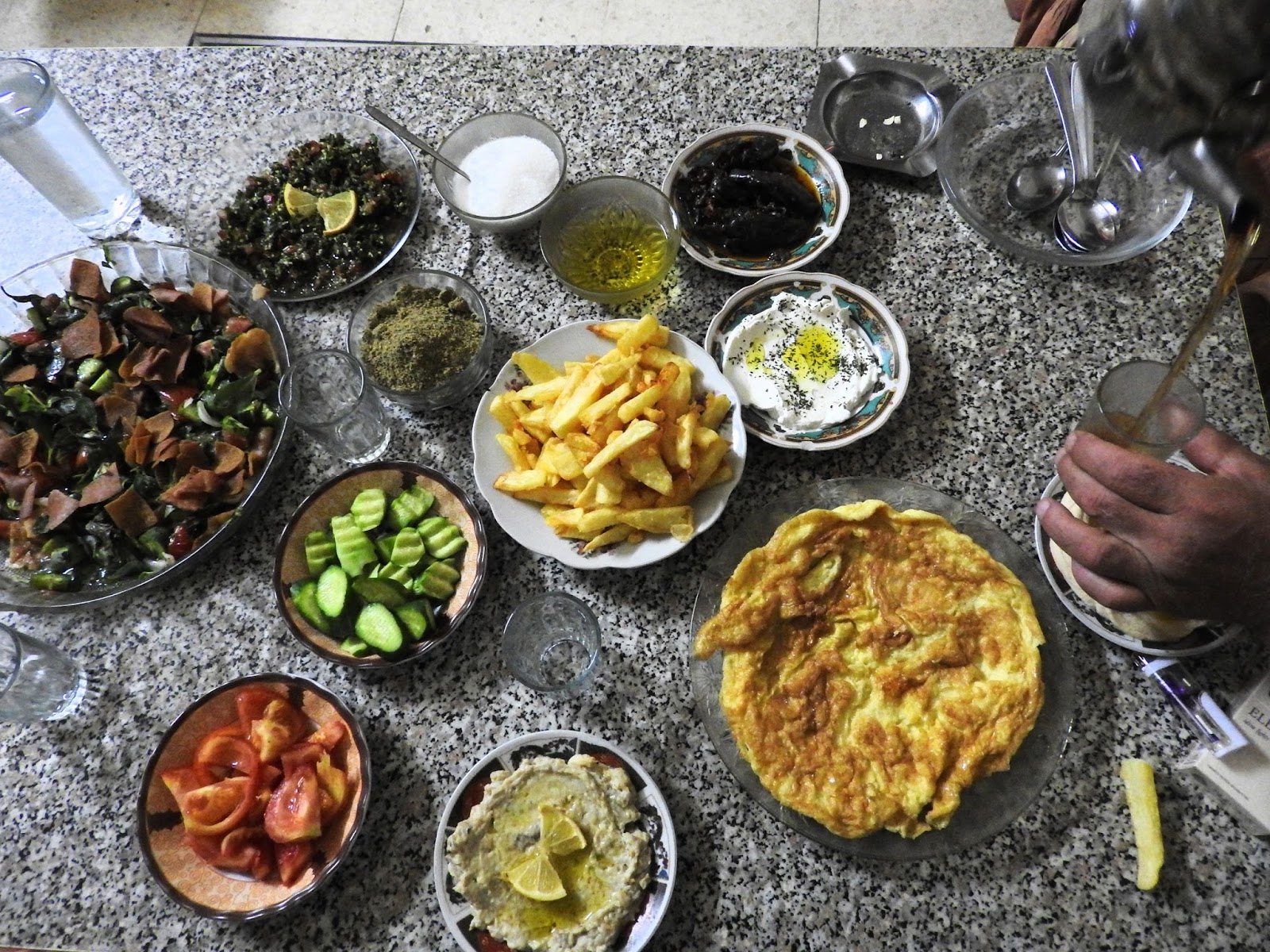 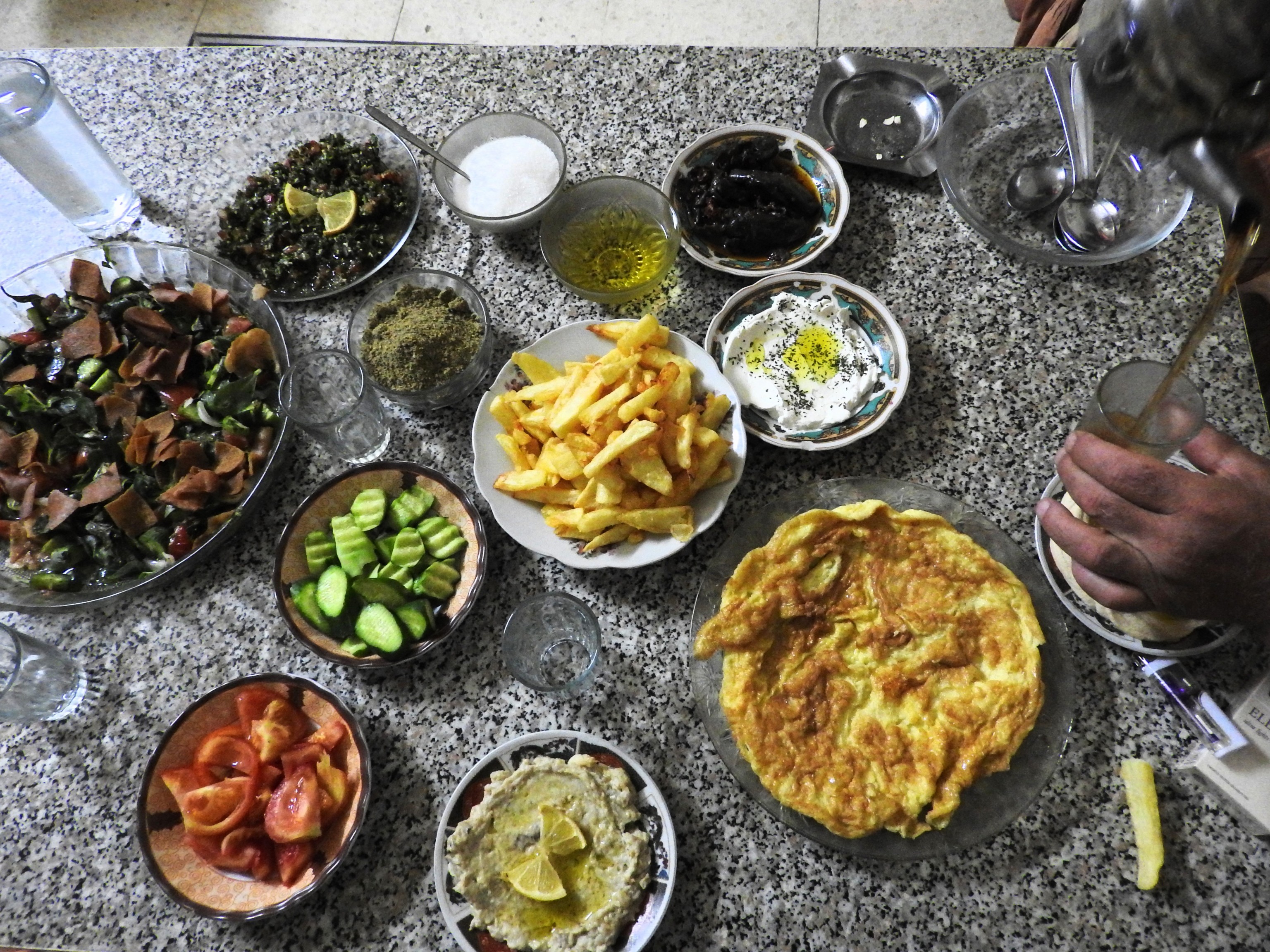 A shared meal with local family in the Old City. After over five years of the war on Syria, prices for all basic goods have risen dramatically, while incomes remain the same or shattered. The Western sanctions on the Syria worsen the situation, hurting the Syrian people and social services the most. 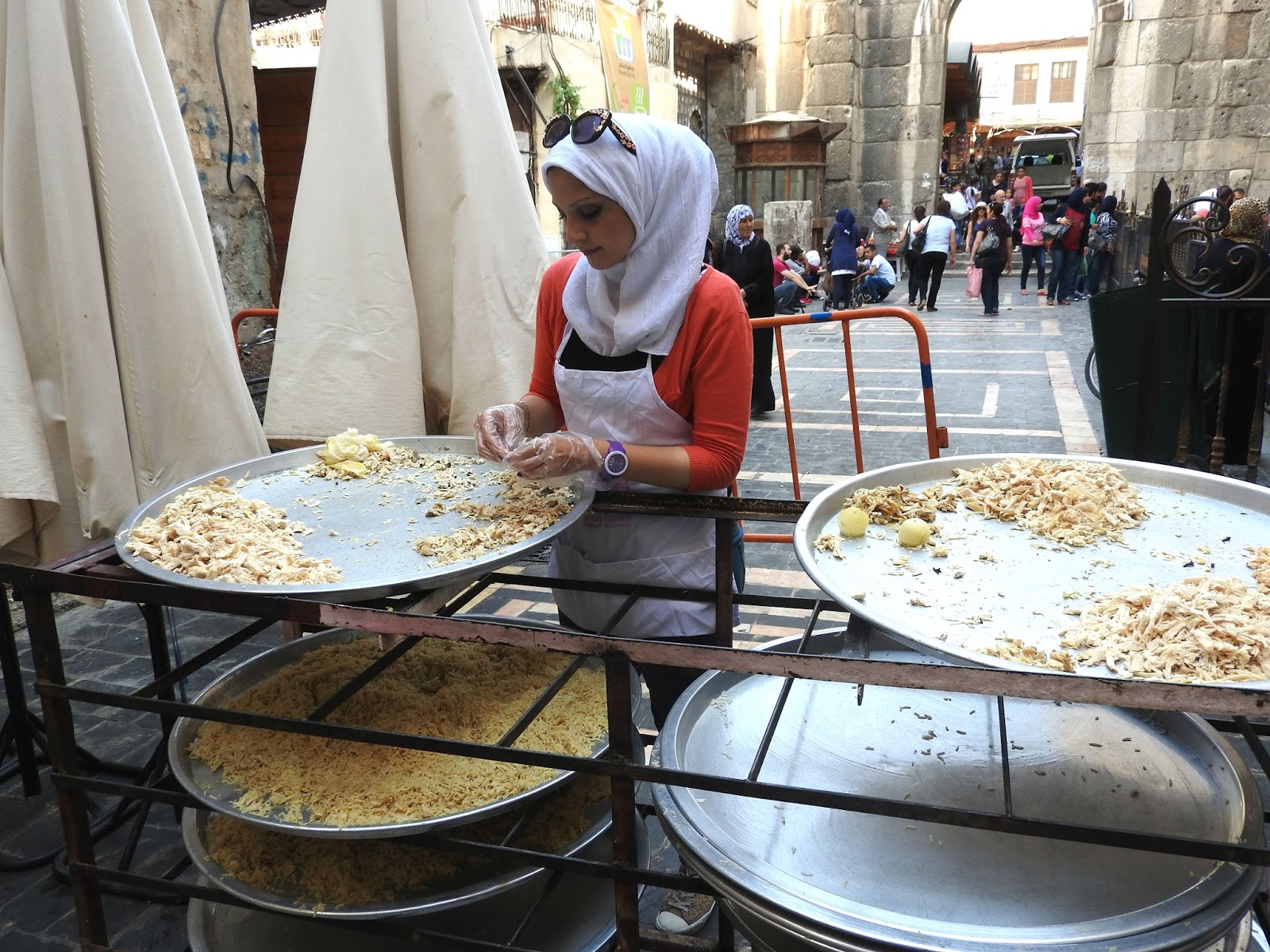 Behind the Umayyad Mosque in Old Damascus, one of tens of volunteers daily helps prepare the Iftar (fast-breaking) meals that the Saaed Association was serving to impoverished Damascus residents, even delivering to those unable to pick up meals themselves. Starting with 3,000 recipients, by the end of Ramadan, the volunteers were providing 10,000 meals daily in Damascus alone, with another combined 7,000 meals prepared in Hama and Homs. 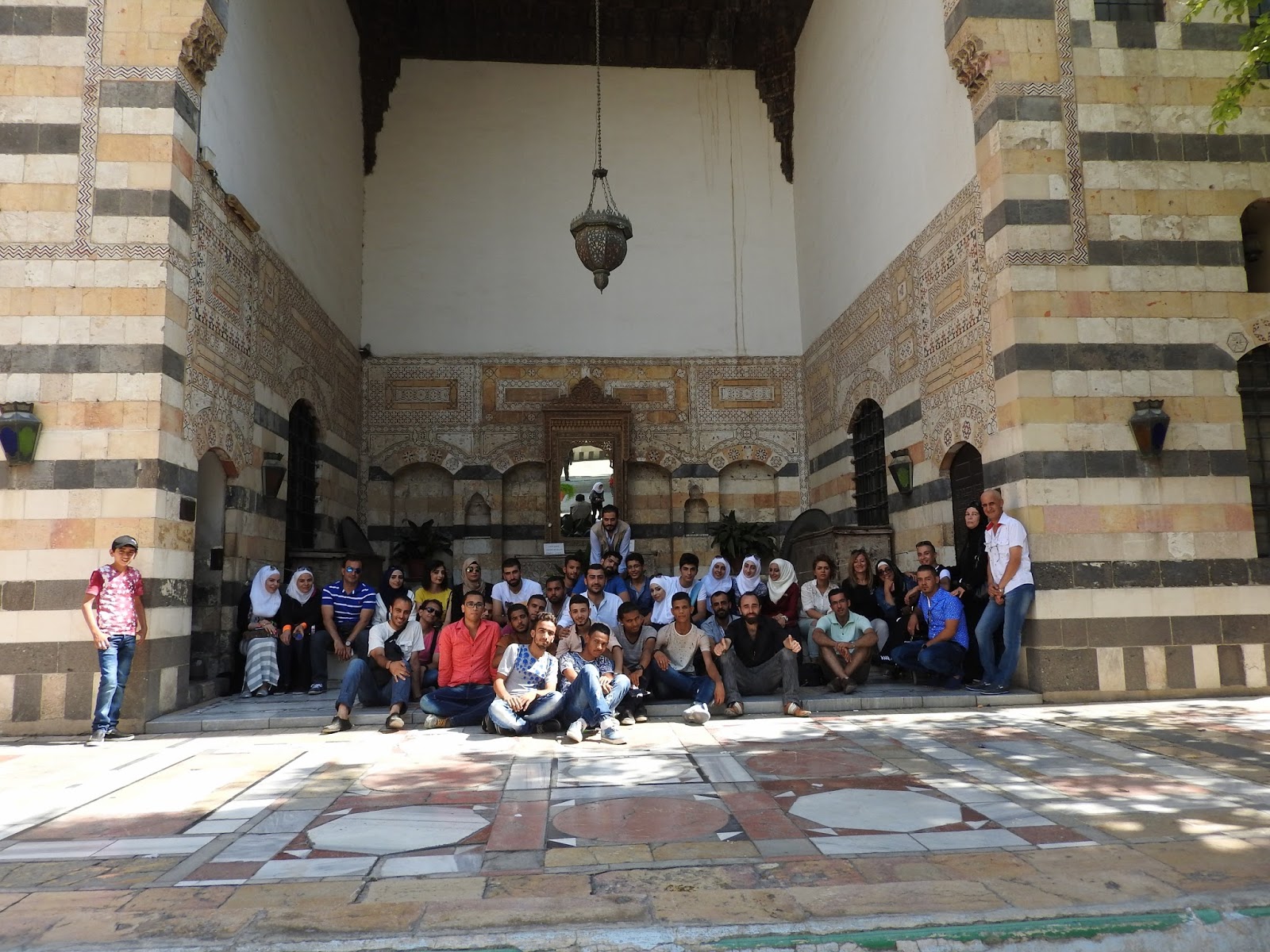 Volunteers from the Saaed Association relax after the second day of ‘Eid activities for children. Instead of clothes or money, “we gave children hope and joy,” one volunteer said. In contrast to the sectarianism imposed on Syria by Gulf States and Turkey, Syrians maintain their unity and secularism, emphasized by such volunteers whose allegiance is to humanitarism and helping the less fortunate.
go on reading here