“I would like to see an Israeli and Palestinian people living peacefully”: Richard Silverstein 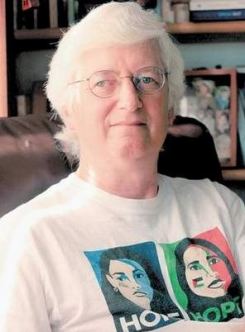 by Milena Rampoldi, ProMosaik e.V.
A very interesting interview with Richard Silverstein, about Israel and Palestine. He explains as his way of being a Zionist. He wants an Israel as fully democratic State, and does not accept apartheid.
Richard Silverstein is a MintPress analyst who has written the Tikun
Olam blog since 2003, specializing in Israeli politics and US foreign
affairs. Silverstein works to expose the excesses of the Israeli
national security state. He breaks major news stories that are often
under judicial gag or military censorship, and which may not be reported
in Israel. He has been published in Haaretz, Al Jazeera English, the
Forward, Christian Science Monitor, Middle East Eye, and the Seattle
Times. He speaks Hebrew fluently and incorporates the Hebrew-language
press into his blog and other publications.

He earned a BA from Columbia University, a BHL from the Jewish
Theological Seminary, and MA in Comparative Literature from UCLA. He
did two years of undergraduate and graduate study at the Hebrew
University. He lives in Seattle.

Milena Rampoldi: You define yourself as progressive (critical) Zionist. Can you explain this to our readers?

Richard Silverstein: I often find that ideological
definitions can be a trap.  While they permit one to understand the views
you may hold, they often drive others away who judge someone’s value based on
these phrases.

That being said, I call myself a
progressive Zionist.  That is a far-cry from what I call a “classical
Zionist,” someone who believes that the Jewish right to the land of Israel is
exclusive of the rights of anyone else residing there.  My Zionism does
not grant superior rights to Jews.  It does not define Israel as a state
in which there are first and second class citizens.  Like Azmi Bishara,
Israel must be a State of all its citizens.  Everyone must have
equal rights in every social, political and economic sphere.  While
religion is a defining quality of many, if not most Israeli citizens, it should
not accord anyone rights that are different than anyone else.

Israel should become a nation in which
citizens are defined primary by nationality, rather than religion.
That is the only way Israel can find an identity that will be common to all,
regardless of religion.
Contrary to many on both the right and
left side of this debate, I don’t define a final outcome on behalf of the
parties.  I call for Israel to be a fully democratic state.  I call
for a transformation of the nation from the authoritarian, religion-dominated
state it is now into a democracy.
Personally, I no longer believe a two
state solution is possible.  A one-state solution seems much more likely
given Israel’s intransigence and refusal to compromise.  But I don’t feel
it’s my responsibility to define outcomes for those who will have to live in this
future state.

What
are the most important objectives of your blog Tikun Olam?
Tikun Olam is a blog which exposes the
secrets of the Israeli national security state.  I’ve defined national
security as the single most destructive aspect of Israeli society (there are
many other destructive elements worth considering as well, of course).
That is why I focus on exposing gag orders and censorship that restricts
freedom of speech and the press.  That is why I expose the lies offered to
the Israeli public by the security forces.  Secrecy is an enemy of freedom
and democracy.  This is a concept not widely understood by most
Israelis.  So it’s the mission of my blog to attempt to inculcate that
value within Israel.


What
do discover the difference between the narrative and the reality? Can you tell
us a couple of useful strategies to look behind the curtains of propaganda and
“rational” narrative?
The prevailing ideological narrative is
that Israel is a liberal democracy.  I call this the liberal Zionist
narrative.  Those inside and outside Israel know that it cannot be
presented as a Jewish state alone.  They know that without a democratic
veneer Israel would lose what little support it has in the world.  SO they
persist in the delusion that there is democracy in Israel.  They refuse to
acknowledge that democracy is a dead letter in Israel.  That only Jews
enjoy democracy, and those who are Jewish dissidents don’t even enjoy
that.  It is important to expose liberal Zionism as a sham.  Doing so
will force Israel’s supporters to come to the realization that only a radical
transformation of Israeli society will allow it to endure in the long term.


What
are the most important elements of the Jewish supremacy ideology? How to
dismantle them?
As an outsider (non-Israeli), it is hard
to know what or how to dismantle the liberal Zionist construct.  The best
way for me to do this is to use my blog as a tool to expose the contradictions
in the prevailing national narrative.  That I am doing this, and
succeeding at it is proven by the amount of attacks, insults, and constant
hasbara attention that my blog receives.  It is also proven by the
hostility much of the Israeli media reserves for my work.  I add to this
the Israeli military censor, who singles out my blog for castigation.

What
do you wish for Palestine in the future?

What
is your political vision for peace in the Middle East?
I would like to
see Israel integrated into the entire Middle East region: a part of it instead
of a foreign implant that is alien from every state surrounding it.
I
would like to see Israeli Jews honoring and respecting non-Jewish citizens and
seeing them as no different.  I would like to see Israeli Jews speaking
Arabic the way Anglophones speak French in Quebec.  I would like Israeli
Jews to understand that they are part of the Middle East and not separate from
it.  To do so, they must embrace the prevailing Arab culture and society,
and find a place for themselves within it.