An open letter to the Jewish Community in Frankfurt by ProMosaik e.V.

August 11, 2014February 23, 2021 by Milena Rampoldi
Hi
all, Shalom aleichem and as-salamu aleikum,
I
would like to try to answer to the Jewish Community in Frankfurt as
Muslim.
Muslims
are not Anti-Semitic by definition, because Judaism and Islam are both Semitic
religions, based on very similar principles of belief in one God who created
the world and of similar ethical values one of which is PEACE based on
JUSTICE.
However,
Jews in Europe have to understand this particular historical situation during
such an aggressive war against our Muslim children in Gaza….  Many Jews
do not approve this war. Many orthodox Jews protested against the Israeli State…
We have written many articles about this part of Jews who are anti-Zionist,
exactly as we are. Try to be empathic and to understand how much a mother
suffers when the Israeli army murders her child in front of her… and this
happens every day. And try to understand how much we suffer when we see the
mosques you just bombed.. or when we see a video of Israeli soldiers happy and
clapping their hands because the bombing of the mosque was a success (believe me
I saw that video)… or if right wing Israelis insult our women on twitter or
facebook…. or compare a dead Palestinian child to halal meat… or if Israeli
propaganda compares the Africans in Israel with insects (please read our German
summary of David Sheen in our blog)… or if we see how an Israeli soldier pisses
on the roof of a Palestinian house next to a water tank … or how children are
imprisoned and tortured… or how desperate children throw stones without being
afraid of being shot… this makes us ill, believe me… and we are not in Gaza… in
Gaza people get radical because of this…. They are a product of your violence
and of your politics not as Jews but as supporters of the Israeli Zionist
GOVERNMENT!

Muslims
criticize Israel at this moment because Israel bombs and kills civilians in
Gaza. The fact that anti-Semitic voices come up in Europe is manipulated by the
Zionist press to show that Jews are not welcome in the West. This is
partially true, but please do not compare Anti-Semitism in the West with Muslim
insults against Jews because they are desperate and forget the difference between
a Jewish believer and a the Zionist aggressor.
But
Jews did ALWAYS live with Muslims in history… This is a historical truth and
a historical achievement…
To all
Muslims I would like to say: Let us focus on the humanitarian tragedy of Gaza
instead of insulting Jews in Europe… Do not insult Jews because they are
Jews… but say NO to the war in Gaza… say firmly NO to this war and to this
violence. This is genocide… it is not a war of one army against the other….
And say NO against the USA and the weapon empires of this world.
Zionist
press accuses Hamas to mix civilians with warriors…. but please consider how
big Gaza is…. and that they want their freedom… give them their land back!!
To all
Muslims I would like to say again: Do not offend Jews as they are our
predecessors in faith… they are our brothers in monotheism. … but stand up
against Israeli politics and against the colonialist genocide of ZIONISM. Stand
up with all Anti-Zionist Jews of this world!
We are
sorry, if there are some Muslims who accuse Jews… we do not.. but we accuse
the war crimes of that part of the State of Israel which believes that ZIONISM
is the same as JUDAISM. We protest against FEIGLIN because we are convinced
that he does not respect HUMAN dignity at all!
For us
of ProMosaik e.V. Judaism is completely different from what ZIONISM is, since
ZIONISM is an atheistic, colonialist ideology of superiority of Jews over other
people which does not respect the rules of the Torah and the authentic Jewish
faith.
And we
love Judaism because we love monotheism and are monotheists as well!
And we
love the rabbis for human rights, and we love Neturei Karta, and we love Erich
Fried who appealed to Israel to LISTEN.
And
therefore we hope that all ZIONSTS will turn their face towards the authentic
tradition of Judaism…
This
is our hope, and this is our belief
thanks
in advance for your answers and comments to this article. Write to: info@promosaik.com
Thank you!!!
תודה לך
Dr
phil Milena Rampoldi
Editorial
Team of ProMosaik e.V.
Here you can see a photo of the Synagogue in Frankfurt (source: Frankfurt.de) 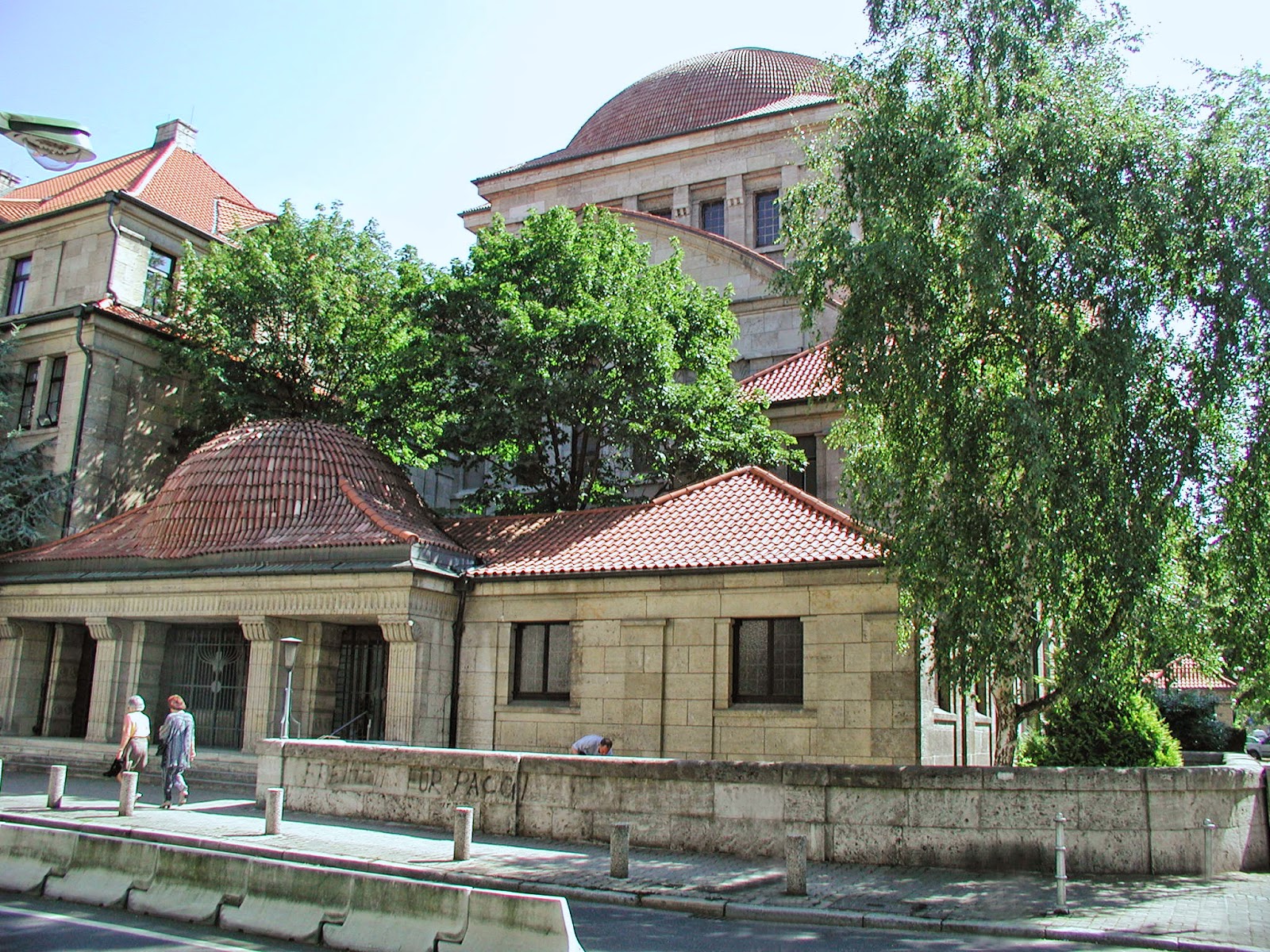 Cite Anti-Semitic Statements Made by Muslims

Frankfurt’s Jewish community has dropped out of the
city’s interfaith “Council of Religions” due to anti-Semitic and
anti-Israel statements by local Islamic leaders.
At issue is the failure of the interfaith group to
condemn statements by members of the Islamic Religious Association of
Hessen, according to Leo Latasch, head of social affairs for the Jewish
community.
“These are not people with whom we can continue to
work,” he told Germany’s Jewish weekly, the Juedische Allgemeine.
For example, in a press statement, the Islamic association had accused
the Central Council of Jews in Germany of using the issue of
anti-Semitism in Europe “to divert attention from the war crimes of the
Israeli government.”
Ünal Kaymakci, deputy director of the Islamic
association and a member of the Council of Religions, also posted on
Facebook a link to an article in which Israel was charged with state
terrorism and crimes
against humanity, the Jewish weekly reported.
Selçuk Dogruer, who represents Muslims in the
interfaith council, said Frankfurt’s police chief should not have
apologized to the Central Council for losing control of an anti-Israel
demonstration there. The police handed a megaphone to leaders of the
demonstration in hopes they would calm the crowds. Instead, the leaders
chanted anti-Israel slogans in both German and Arabic.
Latasch told the German Jewish weekly it was not
enough for the Council of Religions to say that Facebook comments and
other public statements were not official statements.
Dieter Graumann, head of the Central Council of Jews,
accused the interfaith group of failing to hold up its end of the
bargain. The Jewish organization “has always stood up for Muslims in
Germany,” he said. “But solidarity from Muslims towards Jews remains
missing.”