Report by al-Jazeera about women abused in Egyptian prisons

Hi all,
Hereby we want you to know the report by
al-Jazeera about women abused in Egyptian prisons after the military coup.
Sexual abuse against women is a violation
against human rights, and abusing women in prison where they cannot protect and
defend themselves, is a violation against human rights as well.
Abusing women is an act of cowardice.
ProMosaik e.V. wants to express its
profound solidarity to all this abused women.
Stand up, speak!!
This is the most important thing when you
are sexually abused: Do not consider it as a shame. You are not the shame. The
man who abused you is a shame for this world and the world after.
Report: Women sexually abused in Egyptian
prisons… some 14 times in one day 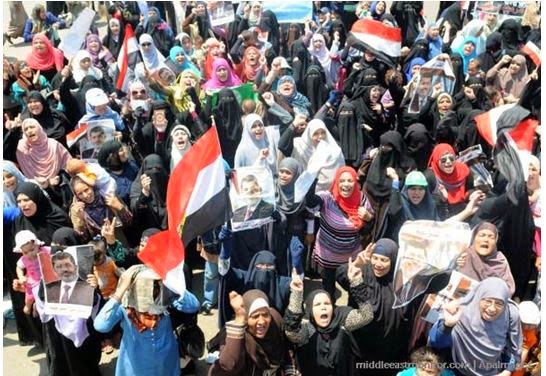 YouTube clip from
Al-Jazeera entitled: A catastrophic report exposes cases of rape inside
military prisons. One girl was raped 14 times
The
clip was posted on June 29, 2014.
Presenter:
The delegation submitted a general report about the violations that took place
against Egyptian women since the military coup and until the first of June. The
delegation also submitted another detailed report about cases of rape and
sexual assault taking place against female detainees inside Egyptian prisons
and police stations. The delegation submitted an authenticated report of seven
cases of rape of female detainees. The report included a list of the names of
detention centres and the names of police officers and individuals accused of
raping the women including the cases of two women who were raped 14 times in
one day in one of the detention centres belonging to Central Security Forces.
One of the female detainees was suspended naked and sexually assaulted and was
forced to watch obscene scenes. The delegation, which is composed of the
European Coalition for Democracy and Human Rights, called for placing Egyptian
women under a special category by the Committee for Women and Children and
called for opening an investigation, by a neutral committee, into the
violations and for opening the prisons and police station for inspection as
well as for making police officers and cadets accountable for their actions.
Narrator:
Documented testimonies of cases of rape to which women were subjected inside
Egyptian prisons and police stations keep being uncovered. The latest case was disclosed
by lawyer Ahmad Sayf Al-Islam Hammad and was publicised by human rights
activist Haytham Abu Khalil. It is the case of an Al-Azhar female student who
was raped inside an armoured police vehicle.
Lawyer Hammad:
Sixty-eight people were accused in this case. It happened on December 28, 2013.
On that day students were arrested inside the university. They were then taken
to Nasr City police station and from there on to Al-Salam Military Camp. They
were questioned by the prosecution there. We were lucky that [the girl] was
released on bail set at 500 Egyptian pounds. She was the only person [to be
released] from amongst the accused. We were lucky she was released. I was
surprised afterwards that her mother [spoke about] problems between Nada and
her husband. I tried to intervene to reconcile them. Her mother came to me in
the office with tears dropping from her eyes. I asked her: “What’s wrong?
Are you the cause of this? Why doesn’t your daughter want to return to her
husband?” She kept saying it was the prison and this and that. Finally,
she broke down and said: “My daughter, this and that happened to
her”. The officer raped her. She told me about this disastrous incident.
Narrator:
In the meantime, the International Coalition of Expatriate Egyptians has published
the first report that documents cases of rape and sexual abuse inside Egyptian
prisons and police stations. The coalition made a submission to the UN Human
Rights Commission about these violations.
Female witness: We have
received reports of several rape and sexual assault cases. We have documented
seven cases. Out of concern for safety of the victims, we keep the names of the
victims and the assailants and the places were the crimes took place
confidential.
Narrator:
The European Coalition for Freedom and Democracy, one of the affiliates of the
International Coalition of Egyptian Expatriates, published a booklet entitled
Save Cleopatra that deals with violations perpetrated against Egyptian women
since the coup and until now.
Female witness: I shall
speak about four cases. One of them was kidnapped by security forces. She was
assaulted by persons dressed in police and army uniforms inside the prison
vehicle then she was thrown on the road; it was a gang rape. The second case
was kidnapped and assaulted inside a police station. She was gang raped by
officers and cadets. There were two cases last month that were raped 14 times
in one day. This happened in one of the central security camps.
Narrator:
Violations did not stop at the perpetration of rape against female detainees.
There were other violations too.
Female witness: One of
the female detainees was suspended completely naked like a pendulum. She was
sexually assaulted by all the police officers and cadets present at the time.
Young women were forced to watch indecent videos. In one of the prisons two
male officers were naked while they searched female detainees. The floor was
wiped using the bodies of victims, this happened in the Nasr City police
station’s second precinct. Some female detainees were paraded naked in front of
police officers and cadets and were sexually assaulted.
Narrator:
These savage assaults have not attracted the attention of the authorities who
have not taken steps to investigate them despite repeated appeals from the
local and international communities for them to do so.
Video link: https://www.youtube.com/watch?feature=player_embedded&v=rvejS1R2dgA
Source:
https://www.middleeastmonitor.com/news/africa/12480-report-women-sexually-abused-in-egyptian-prisons-some-14-times-in-one-day
Happy to get your feedback
Khaled Kasrawy
Editorial Team of ProMosaik e.V.