ProMosaik e.V. against Sexual Abuse in Egyptian Prisons after the Coup

Hereby we are
presenting you a second report from Egypt, about the same matter, which is
really important to us.

Nobody has the
right to sexually abuse, torture and rape people, if women or men.

In dictatorships,
unfortunately, this is a typical weapon used against their own citizens. Sexual
abuse makes victims incapable of fighting, incapable of reaction as it touches
their dignity and destroys their self-consciousness. Therefore society and
social movements in society which fight against sexual violence have to help
them, protect them and support them at the Court when they sit in front of
their rapist and have to give testimony.

But sexual abuse is
not just a violation, but a crime against human dignity.

And ProMosaik e.V.
stands for HUMAN DIGNITY as expressed in the MANIFESTO of the association.

From our point of
view, we have to write about it to let people know where and how this crime is
committed. And to let them know who are the coward people committing it day per
day…

We know that for victims
it is difficult to speak about it…. Many obstacles are there. Women are afraid
of speaking if they lost their virginity by sexual abuse, as virginity is an
essential religious and social value in Islam, and not only, but in all
monotheistic religions.

But having been the
victim of abuse is not a sin, it is a violation the women have suffered from,
and against which they have to stand up. We need a large-scale social movement
against sexual abuse. Sexual abuse must stop everywhere in the world. And what
happened in India was just an example. And what happens in Egypt is another of
the innumerous examples of abuse and oppression.

Sexual abuse is a
coward crime of somebody who ignores the other’s dignity, of somebody who
cowardly profits from the other who is in a weak position, for example as woman
in an Egyptian prison during the new dictatorship we have in the country at the
moment.

The second
important matter is not to forget the sexual abuses against men… Men do not
speak because they feel they lose their virility… but this is wrong. An abused
man who speaks and fights against the abuse of other men and women in society,
for me personally is a real hero … a social hero and an authentic fighter for
human rights… And these social movements against abuse of all kind will grow in
the Islamic world, and nothing can stop them.

Happy to get your
feedback to the following article.

The Editorial Team
of ProMosaik e.V.

Activists say numerous
political prisoners, including men and women, have been severely abused in
custody. 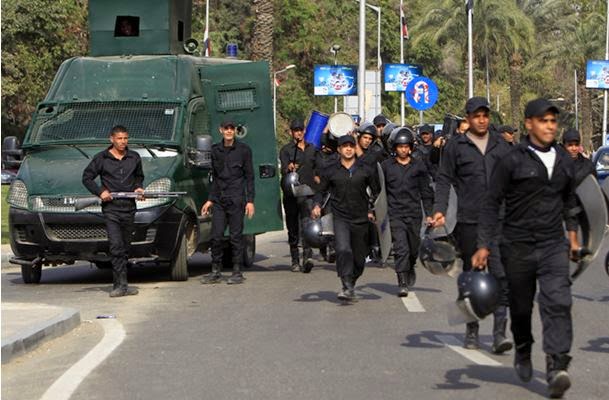 Human
rights activists have reported that a number of political detainees, including
men and women, were tortured and raped while in police custody in Egypt.
Hytham
Abu Khalil, a leading activist, told a news conference organised by the
“Justice for Egypt” society in Geneva, Switzerland that 22-year-old
university student who was also a member of the al-Nour Salafi party, was
tortured and grossly raped inside a police station in Nasr city.
The
Egyptian government has refused to comment on the alleged abuse of detainees.
Local
media outlets have also turned a deaf ear to the claims and have to declined to
launch official inquiries.

The student of al-Azhar University is still detained  since he was
arrested along with one of his colleagues in a police ambush at the city’s
al-Jabal al-Ahmar district. He was arrested late last February because a slogan
for “Rabaa al-Adawiya” was found posted on his cellphone.

The victim was reportedly tortured by knives, electrocution and was beaten
fiercely. He was then taken to a second-floor room where he was raped by
security forces because he denied accusations that he was linked to the Muslim
Brotherhood.

He was also forced to name military coup leader Abdul Fattah al-Sisi “a great
hero” and chanting a song titled: “Taslam al-Ayadi” ( may our deeds be
blessed), Abu Khalil added..

Abu Khalil has called Egyptian and international civil rights organizations to
intervene and help rescue the victim. He has  also called the Egyptian
attorney general Hisham Barakat to immediately release the victim, launch an
immediate inquiry into the violations and announce the results to the Egyptian
people.

Khalil also says he is holding Egyptian Interior Minister Mohamed Ibrahim fully
responsible for guaranteeing the safety of the attacked student and his family.

For his part, lawyer and human rights activist Ahmaed Bahaaddin has reaffirmed
that rape crimes occur inside Egyptian prisons and detention centres, saying
they were “shameful acts that smear the image of the ruling regime that
gravely undermine Egypt’s honour and reputation both internally and abroad,
after the Egyptian police opted for systematically abusing innocent civilians,
instead of protecting them”.

In a statement to Al-Jazeera, Bahaaddin added that police torture and humiliate
those arrested  by beating and kicking them, then gradually stepping up
the violations into rape or homicide, particularly against young victims.

Bahaaddin has asserted the difficulty in counting the number of those exposed
to rape attacks inside police stations because  many of those rape victims
fear admitting the abuse or are still in custody.

Mustafa al-Hadda, another human rights activist, confirmed that what had
occurred to the student from al-Azhar, was not the first incident of its kind
in Egypt. This is because the incumbent regime has allegedly adopted the abuse
as a policy against opponents of the government.

“The
policy is to  humiliate, traumatize and  to render them politically
impotent”, al-Hadda said.

Al-Hadda has disclosed to Al Jazeera that a group of detained
students, including political activist Khalid al-Sayed, were raped in
al-Azbakiya and Qasr al-Niel police stations after they were arrested for
protesting.

Source:
http://www.aljazeera.com/humanrights/2014/04/egyptian-detainees-tortured-raped-201441165823978172.html
Happy
to read your feedback about this article soon
Khaled
Kasrawy
The
Editorial Team of ProMosaik