The Unabated Bombardment of Idlib in Syria

August 23, 2019February 23, 2021 by milena rampoldi
Syria is now enduring its ninth year of war, marred throughout by some of the most egregious harms.
Over the last few weeks, the northwestern area of Idlib province in Syria has come under constant bombardment from regime forces and its allies. With a disturbing civilian casualty count mounting and a nation in upheaval after years of civil war, waning global attention is causing concern that one of the biggest emergencies in recent history could be bearing one of the worst crises of the century.
On August 17, escalation in the offensive on Idlib left seven people in one family dead, including six children, as an air raid hit their home in a village in the south of the governorate. The casualties were recorded a day after 13 other people were killed in a displacement camp in the village of al-Haas and following the displacement of hundreds and thousands of civilians as Syrian forces have advanced on the last opposition stronghold in the country.
The UN has said at least 400,000 people have been uprooted, some for the fourth or fifth time, as a military campaign — reportedly assisted by Russian forces — has continued “unabated” since late April, as one spokesperson for the multilateral body put it. Turkish media say the number of internally displaced persons (IDP) could rise to 1 million if operations expand.
The current humanitarian decline in the province has occurred despite a ceasefire being declared at the recent Astana peace talks as well as past efforts for Idlib to become a de-escalation zone. The regime blamed Hayat Tahrir al-Sham (HTS), an al-Qaeda affiliated group that controls Idlib, for not fully complying with the ceasefire and for carrying out attacks on civilian objects. Human rights groups say the Syrian regime and its allies have been responsible for killing a least 781 civilians, including 208 children, in raids between April 26 and July 27. By August 5, the ceasefire was declared officially over.
Stark warnings have been ushered by the United Nations, with the situation triggering “total panic.” Mark Lowcock, the under-secretary-general for humanitarian affairs and emergency relief coordinator, has warnedthat it could create the “worst humanitarian disaster” of the century. 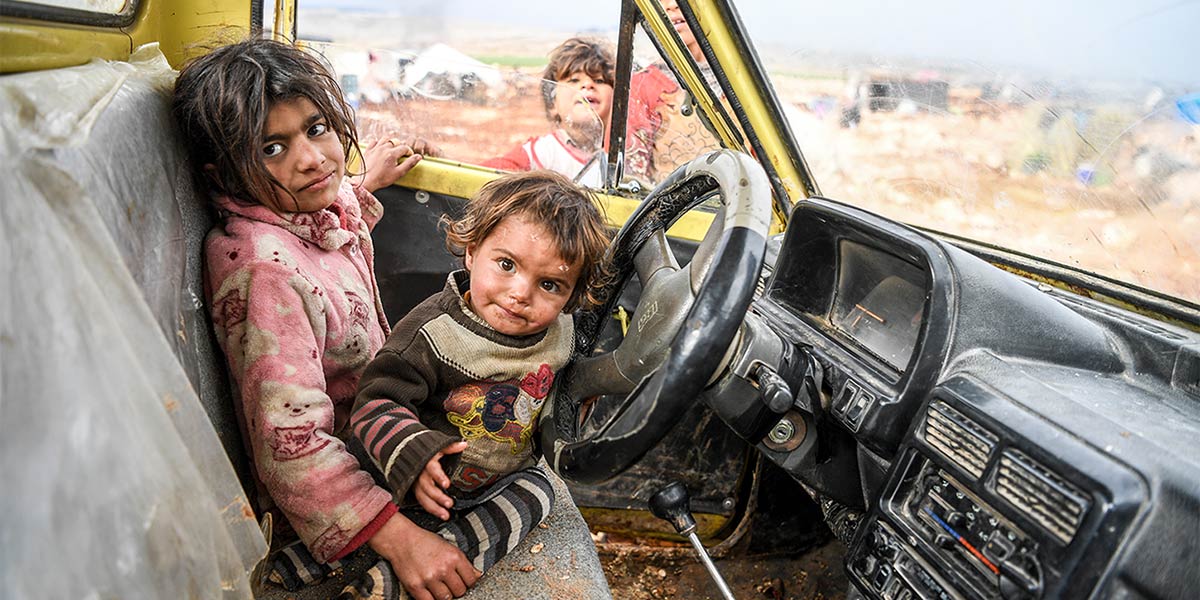 Refugees in Idlib, Syria on 4/14/2018 © Quetions123 / Shutterstock
Consider that Idlib has, over the last few years, acted as a reception area for civilians fleeing government advances elsewhere, and without other opposition-held territories to flee to, most displacement has been contained within the province, with a proportion fleeing northward to Aleppo.
While horror unfolds under the rain of mortar and fire, already densely-populated areas of Idlib province suffer overcrowding, impacting the humanitarian situation and precarity among displaced communities. Strained resources also mean more support is needed from aid agencies, although the sector concedes that aid alone is not a sustainable solution. At the same time, child labor among displaced communities is now becoming more prevalent, lending concern that children are being exposed to abuse and exploitation.
On August 22, the Syrian government announced it was opening a “humanitarian corridor” to allow civilians to leave Idlib province and the neighboring Hama. Yet without the current offensive relenting, the humanitarian situation is only expected to worsen, while overall in Syria some 5 million people remain in acute need. Furthermore, those who have returned from cross-border displacement have been subject to abuse and persecution by the regime, according to the Syrian Network for Human Rights (SNHR). The organization has also documented that at least 426 IDPs returning to regime-controlled areas have been detained, including 13 children — 284 of whom were forcibly disappeared.
With Idlib in crisis, the international response has been wanting. In July, UN Human Rights Chief Michelle Bachelet aired frustration at the lack of acknowledgment from the international community, poignantly saying: “Airstrikes kill and maim significant numbers of civilians several times a week, and the response seems to be a collective shrug.” Othman Mokbel, chief executive of Syria Relief, recently noted in an opinion piece for The Independent that the country no longer forms part of the national conversation anymore and much of the British public are not even aware there is still a conflict there.
A Safe Zone in Syria
Meanwhile, the US and Turkey agreed on August 7 to put in place a 32-kilometer-deep safe zone in northern Syria, something that has been in Turkish sights for a while now. This is in addition to a “peace corridor” running between the Euphrates River to the Iraqi border in order to help the safe passage of Syrian refugees in Turkey back into Syria as well as facilitating securitization needs.
However, with the US using the People’s Protection Units (YPG) — which Turkey sees as a terrorist group — as a proxy to fight Islamic State militants in the region, there remain sticking points in the deal. In particular, Ankara wants to clear the area of forces from the YPG and the Kurdistan Workers’ Party (PKK) and remove administrative autonomy in any of the Kurdish-run towns. With reference to a previously stalled deal over the northern city of Manbij, Turkish Foreign Minister Mevlüt Çavuşoğlu has made it clear Turkey was not prepared to wait this time.
There is also the fact that, several years ago, there were serious question marks over the establishment of a safe zone and how secure it might be for civilians.
Syria is now enduring its ninth year of war, marred throughout by some of the most egregious harms — barrel bombs, disappearances, chemical weapons and conscription — while proxies, non-state actors and parties to the conflict compete for their own interests, convoluting the theater of war. Now, the worst could be yet to come while the world fails to register the devastation.
The views expressed in this article are the author’s own and do not necessarily reflect Fair Observer’s editorial policy.