February 19, 2019February 23, 2021 by milena rampoldi
Many Haitians remain wary of recent promises by the government to trim expenses and investigate alleged corruption.
Businesses and government offices slowly reopened across Haiti on Monday after more than a week of deadly demonstrations over prices that have doubled for food, gas and other basic goods in recent weeks amid allegations of government corruption.
Public transportation resumed in the capital, Port-au-Prince, where people began lining up to buy food, water and gas as crews cleared barricaded streets.
Hundreds of thousands of Haitians had protested last week to demand the resignation of President Jovenel Moise. At least seven people have died in the protests.
Moise has refused to step down, though his prime minister, Jean-Henry Ceant, said over the weekend that he has agreed to reduce certain government budgets by 30 percent, limit the travel of government officials and remove all non-essential privileges they enjoy, including phone cards. Ceant also vowed to investigate alleged misspending tied to a Venezuelan programme that provided Haiti with subsidised oil and said he has requested that a court audit all state-owned enterprises.
But many Haitians remained wary of those promises, and schools remained closed on Monday amid concerns of more clashes with security forces.
“The government is making statements that are not changing anything at this point,” said Hector Jean, a taxi driver who was waiting for customers. He recently had to buy a gallon of gas for 500 gourdes ($6), more than twice what he normally pays, and he has been unable to find customers who can afford to pay higher fares.
“It’s very hard to bring something home,” he said. “I have three kids.”
Prices doubled
Other goods in the Western Hemisphere’s poorest nation have also doubled in price in recent weeks: A sack of rice now costs $18 and a can of dry beans around $7. In addition, a gallon of cooking oil has gone up to nearly $11 from $7. Inflation has been in the double digits since 2014, and the price hikes are angering many people in Haiti, where about 60 percent of its nearly 10.5 million people struggle to get by on about $2 a day. A recent report by the US Agency for International Development said about half the country was undernourished.
The latest demonstrations prompted the US government to warn people last week not to travel to Haiti as it urged Moise’s administration to implement economic reforms and redouble efforts to fight corruption and hold accountable those implicated in the scandal over the Venezuelan subsidised oil programme known as Petrocaribe. A Haitian Senate investigation has alleged embezzlement by at least 14 former officials in ex-President Michel Martelly’s administration, but no one has been charged. 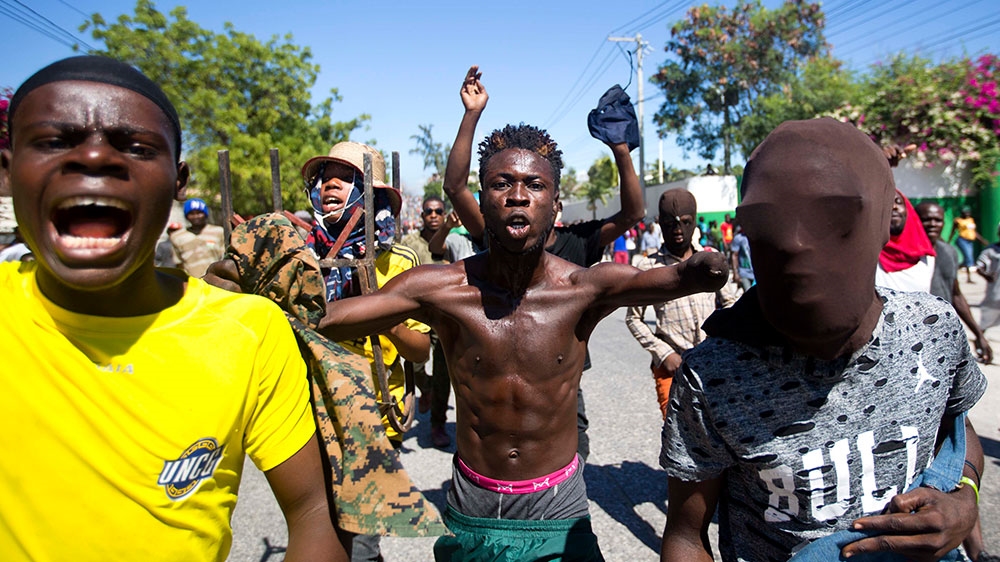 Protesters chant anti-government slogans demanding the resignation of President Jovenel Moise in Port-au-Prince, Haiti [Dieu Nalio Chery/AP Photo]
Meanwhile, Haitians have demanded a probe into the spending of the $3.8bn Haiti received as part of the Petrocaribe programme.
“Corruption goes unpunished, and people are just really tired of it,” said Athena Kolbe, a human rights researcher who has worked in Haiti. “I can’t imagine that things are going to calm down.”
She said she doesn’t believe claims that opposition leaders are behind the demonstrations or that people are being paid to protest as has happened in previous years given the incredible number of people that have taken to the streets in recent days. However, Kolbe warned that even if Moise were forced to step down, it would not resolve one of Haiti’s underlying issues: how to address corruption.
“People are just kind of exhausted with the business elite running the country and retaining control and not knowing where public funds are going,” she said. 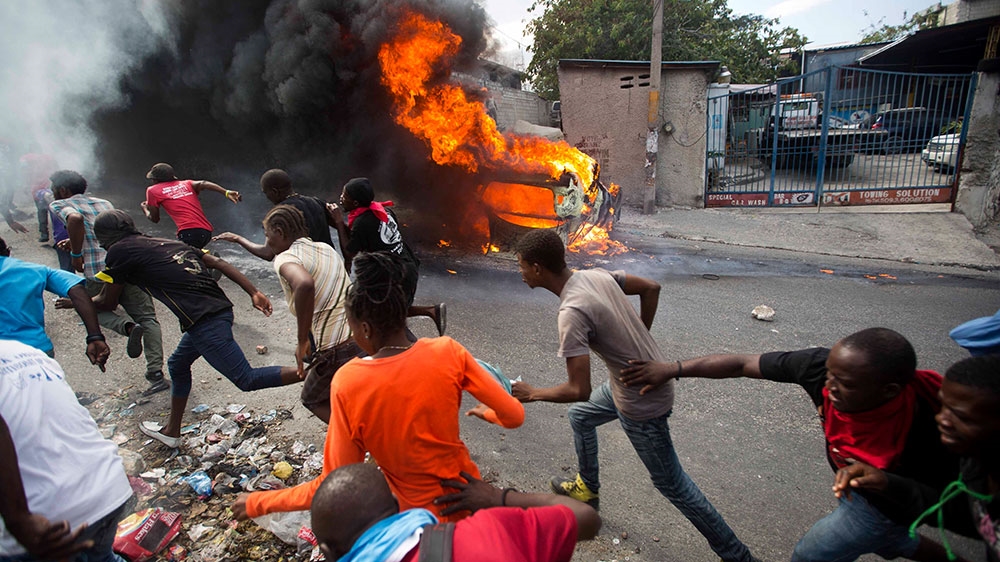 Demonstrators run away from police who are shooting in their direction, as a car burns during a protest demanding the resignation of Haitian President Jovenel Moise in Port-au-Prince, Haiti [Dieu Nalio Chery/AP Photo]
Martelly handpicked Moise in 2015 to be the candidate for the ruling Tet Kale party even though the businessman from northern Haiti had never run for office. Moise was sworn in as president in February 2017 for a five-year term and promised to fight corruption and bring investment and jobs to one of the least developed nations in the world. His swearing-in marked Haiti’s return to constitutional rule a year after Martelly left office without an elected successor amid waves of opposition protests and a political stalemate that led to suspended elections.
Moise’s administration previously set off deadly protests in July 2018 when officials abruptly announced double-digit increases in the prices for gasoline, diesel and kerosene as part of an agreement with the International Monetary Fund to eliminate fuel subsidies and boost government revenue.
At least seven people died in those protests, which also forced Prime Minister Jack Guy Lafontant to resign after facing a no-confidence vote in parliament.