December 12, 2018February 23, 2021 by milena rampoldi
Jakarta rules out talks with separatists who vow to continue their armed campaign and fight for an independent Papua.
Separatist rebels in Indonesia’s far-east Papua province who killed a group of construction workers earlier this month have refused Indonesia’s demand to surrender.
The jungle camp killings of at least 16 labourers last week were a marked escalation in decades of mostly sporadic skirmishes between poorly armed and disorganised fighters and an Indonesian military long accused of gross human rights abuses against civilians.
The rebels said they would continue their armed campaign and fight for an independent Papua, which shares a border with island nation Papua New Guinea, just north of Australia.
“Indonesia came to Papua as a thief – do you think it’s right for a homeowner to surrender to thieves?” rebel spokesperson Sebby Sambom told the AFP news agency on Wednesday.
The resource-rich former Dutch colony declared itself independent in 1961, but neighbouring Indonesia took control of the region two years later on the condition it hold an independence referendum.
Jakarta annexed Papua in 1969 with a United Nations-backed vote that was widely seen as a sham.
In a video posted on YouTube on Monday, Sambom read an open letter to Indonesian President Joko Widodo demanding he hold another referendum for native Papuans to decide whether they want to be integrated with Indonesia.
“TPNPB will not surrender under any circumstances before the independence of the nation of Papua is realised from Indonesian occupation,” Sambom said, referring to the West Papua National Liberation Army (TPNPB), the military wing of the Free Papua Movement (OPM) which claimed responsibility for the jungle camp killings.
“The war will not stop before the demands of the TPNPB are carried out by the government of Indonesia,” he said, standing behind the banned separatist Morning Star flag.
Sambom also called for unrestricted access to Papua for foreign journalists and for the UN refugee agency and the international Red Cross to help take care of civilians caught up in the conflict.
Foreign media need permission to report from Papua and obtaining reliable information is difficult.
The rebels’ refusal to surrender comes after Wiranto, Indonesia’s chief security ministerwho like many in the country goes by one name, ruled out any discussions with the TPNPB group.
“I won’t hold talks with criminals,” Wiranto told reporters in Indonesia’s capital, Jakarta, on Tuesday.
“Whatever they say is a lie. They’ve committed inhumane crimes.” 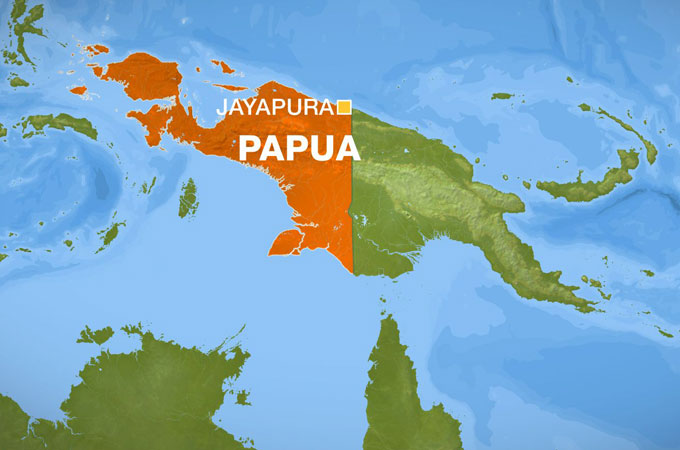 Calls for full investigation
The 16 victims, employees of a state-owned contractor, were building bridges and roads in a major infrastructure push for Indonesia’s most impoverished region.
The rebels claimed the project was military controlled and the workers were legitimate targets.
Indonesia said most of the 16 victims’ hands were tied together with some suffering gunshot or knife wounds and blunt-force wounds. One worker was almost decapitated.
At least four more workers remain missing, while a soldier was also killed by rebels, authorities said.
The OPM had accused the military of killing civilians in its operations which it said included bombings.
Wiranto rejected that accusation but said soldiers did use grenades in clashes. Two soldiers were wounded on Tuesday and three separatists had been killed in clashes, the military said.
Human Rights Watch called for a probe into the jungle camp killings and allegations of subsequent civilian deaths.
“A Papua militant group’s attack on a work site raises grave concerns that require a full investigation,” HRW’s Elaine Pearson said in a statement.
“Militants and responding security forces should not inflict harm on ordinary Papuans,” she added.
Since coming to power in 2014, Widodo has tried to ease tension in Papua by freeing prisoners, addressing rights concerns and stepping up investment, including through a Trans Papua road.