November 7, 2018February 23, 2021 by milena rampoldi
Benjamin Ramos is the 34th victim among legal professionals since President Rodrigo Duterte came to power in 2016.
A human rights lawyer, who provided assistance to families of recently slain sugarcane farmers, was shot dead in central Philippines, becoming the 34th member of the legal profession killed since President Rodrigo Duterte came to power in 2016.
The National Union of Peoples’ Lawyers (NUPL) on Wednesday denounced the killing of Benjamin Ramos, the group’s local leader, who was killed by unidentified motorcycle-riding assailants on Tuesday evening on the island of Negros. Reports said he was hit three times in the back and upper chest.
“We condemn in the strongest possible terms the cold-blooded murder of Attorney Ramos,” NUPL assistant secretary general Josalee Deinla told Al Jazeera.
“The sad reality in the Philippines is that lawyers are getting killed while in legitimate exercise of their profession.”
Police said they are investigating the case, adding that Ramos had received numerous death threats before the deadly attack.
Ramos, 56, was the 24th practising lawyer killed in work-related attacks in the country since August 2016, according to a list compiled by NUPL.
The list also includes three judges and seven prosecutors, bringing the total number of legal professionals killed to at least 34 in the last two years.
Most of the reported deaths have not yet been solved.
On September 29, a lawyer, who handled drug-related cases in the northern city of Laoag, was shot twice in the back but survived. Five days earlier, a female lawyer was killed by gunmen in the southern city of Tagum near Duterte’s hometown of Davao City.
Duterte was took oath of the top office in June 2016. Soon after, he compiled a list of politicians, judges and police officers, whom he accused of having drug links. He has also carried out a deadly anti-drug war that reportedly killed more than 20,000, a number that the government and police dispute.
Recently, the president also railed against left-leaning political groups and threatened to kill communist leaders after peace talks with the government collapsed. In February, he offered a bounty for every rebel fighter killed.
Violence and impunity
Critics said that Duterte’s anti-drug war and harsh rhetoric created an atmosphere, where violence and impunity are tolerated, if not encouraged. 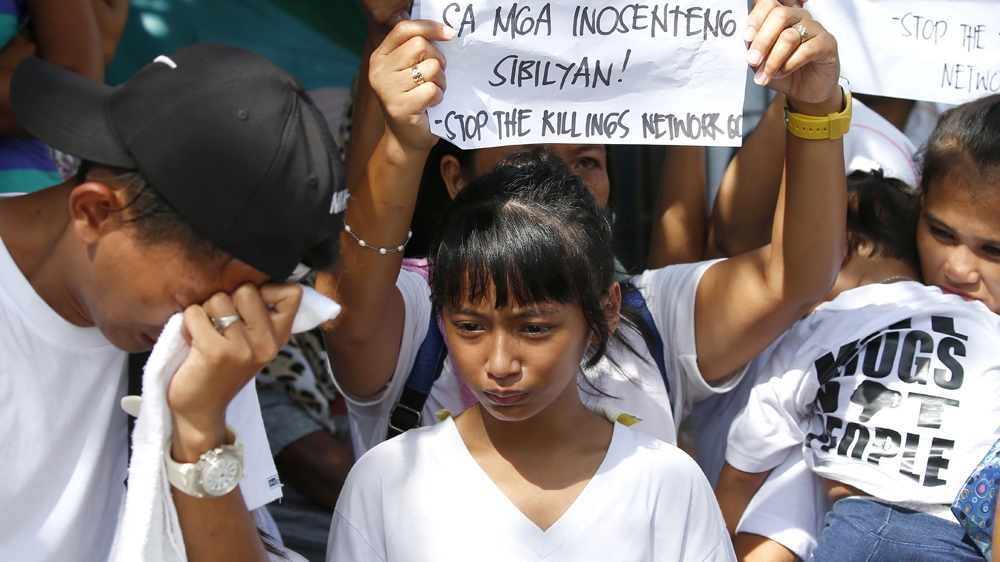 Critics said Duterte’s drug war and harsh rhetoric are to blame for the violence and impunity under his administration [File: AP]
As of July 2018, at least 12 journalists have been reported killed since Duterte became president, according to the National Union of Journalists in the Philippines. Since December 2017, three Catholic priests have also been killed. At least 11 mayors and six vice mayors were killed since June 2016.
In February, the International Criminal Court (ICC) said it has taken steps to investigate the killings, a decision that has angered Duterte.
In a statement to Al Jazeera, Human Rights Watch (HRW) said Ramos’ “murder” is an “indictment of the impunity that has worsened” under Duterte.
“It is a blow to the human-rights movement in the country,” Carlos H Conde, HRW Asia Division researcher, told Al Jazeera.
“We demand an impartial investigation into Ramos’ murder and the many other attacks against lawyers in the Philippines and that the authorities bring the perpetrators to justice.”
In a separate statement, the lawyers’ group, NUPL, praised Ramos for taking on cases involving farmers, environmentalists and other victims of human rights abuses.
“These beastly attacks by treacherous cowards cannot go on,” the statement said, noting that before Ramos’ death, police have “maliciously and irresponsibly tagged” him as someone involved in the left-wing armed movement.
‘From bad to worse’
NUPL senior official Deinla noted that during previous administrations deadly attacks against lawyers were also reported. But she noted the “alarming” number of deaths under Duterte’s watch.
Ramos had recently assisted family members of nine sugarcane farmers, who were shot dead by gunmen while resting inside a vast private estate in the city of Sagay, Negros Occidental.
Deinla said families of the dead farmers believe Ramos’ death was linked to the massacre.
She said that another lawyer of the group is being harassed by police for assisting a possible child witness to the massacre.
Meanwhile, House of Representatives opposition member Carlos Zarate blamed the Duterte administration for “neglect” in going after the killers of the sugarcane farmers and Ramos.
“The human rights situation in the country now has gone from bad to worse,” he said.
“These attacks have to stop and those responsible should be held accountable at the bar of justice. We will not let this cow lawyers from defending the poor and the oppressed.”