October 16, 2018February 23, 2021 by milena rampoldi
Touted as Saudi Arabia’s progressive reformer, Mohammed bin Salman has an ominous human rights record.
The disappearance of Saudi journalist Jamal Khashoggi has put the spotlight on Saudi Arabia’s Crown Prince Mohammed bin Salman, or MBS.
Since he outmanoeuvred his rivals to become Saudi Arabia’s de-facto leader in 2015, the 33-year-old has received favourable coverage in international media, with a multitude of reports focused on his economic and social reforms in the conservative kingdom.
In March, he toured the United States amid a swirl of publicity, gracing the covers of Time Magazine, sitting down for interviews with CBS’ 60 Minutes and Bloomberg.
However, the Khashoggi case has shifted the focus towards the darker side of Salman’s record, one that includes the imprisonment of critics and human rights activists, thousands of civilian deaths in Yemen and a rapid rise of the number of executions since his ascent to power.
The war in Yemen
Detaining the leader of Lebanon
Imprisoning woman human rights activists
Worsening ties with Canada
Purging political rivals
Orchestrating the GCC crisis
Rising number of executions
The disappearance of Jamal Khashoggi
Failing to reform the economy
The aerial destruction of Yemen
In 2015, Saudi Arabia intervened in the civil war in neighbouring Yemen, launching an aerial campaign targeting the Houthi rebels, who were quickly gaining territory.
With logistical support from the US, the Saudi-UAE alliance have now carried out more than 16,000 raids on Houthi-held areas in an attempt to reverse their gains.
Human rights organisations have accused the Saudi-led coalition forces of indiscriminately bombing civilians and hospitals, schools and other infrastructure.
Besides a prolonged air campaign, Saudi Arabia and the UAE have also blockaded the strategic port of Hodeidah, which they see as the main entry point of weapons for the Houthis, which are backed by Iran, Saudi Arabia’s rival.
As a result of that blockade, crucial humanitarian aid has not been able to reach Yemen.
Since 2015, at least 10,000 people have been killed in the Yemen war, many thousands more have died from famine resulting from the war and millions of people have been displaced.
Speaking to Time in April 2018, MBS defended the Saudi-led intervention in Yemen, saying: “In any military operation mistakes happen … Of course, any mistakes made by Saudi Arabia or the coalition are unintended mistakes.
“We don’t need to have a new Hezbollah in the Arabian peninsula. This is a red line not only for Saudi Arabia but for the whole world.”
Forcing the resignation of Lebanon’s PM
What was supposed to be a regular visit to Saudi Arabia turned into a stunning episode of detainment by Saudi security forces for Saad Hariri, the prime minister of Lebanon.
When Hariri travelled to the Saudi capital in November 2017, his phone was confiscated on arrival, and a day later he resigned his post live on a Saudi-owned television channel.
It transpired Hariri was summoned to meet both King Salman and MBS a day after his arrival, but was eventually presented with his resignation speech to read on television, sources told the Reuters news agency shortly after the event.
The move sparked outrage in Lebanon over what was publicly perceived as the abductionof a sovereign state’s prime minister by another country.
Saudi-Lebanese relations were strained, as President Michel Aoun refused to accept the resignation and called on authorities in Riyadh to release his country’s “detained” prime minister.
The prime minister, for his part, accused Iran and Hezbollah of destabilising Lebanon and remained in the Saudi capital for two weeks. 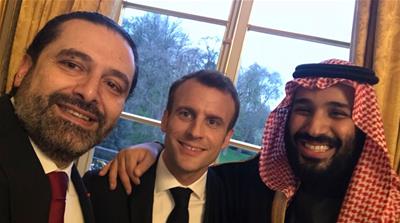