An image is doing the rounds! 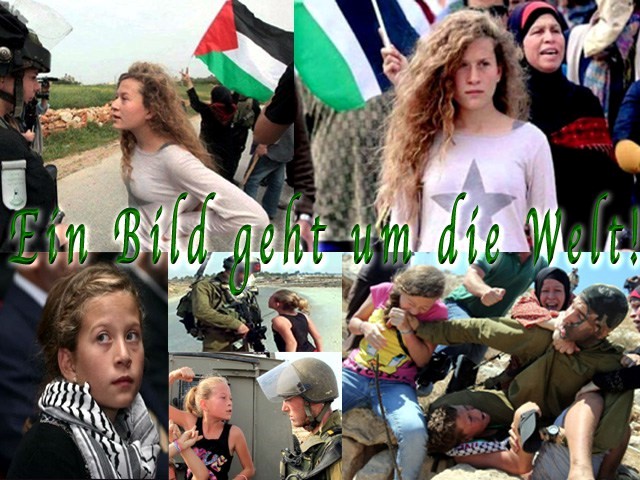 After this
slap, in the night, the henchmen of the occupation, dragged this brave,
courageous girl from her bed. They arrested her like a criminal. And up to
today, she has been in prison. She has to appear before a military court. While
war minister Lieberman is foaming with rage, and wishes her, her parents, and
her “environment” all imaginable penalties, the uneducated minister of
education Bennett calls for “life imprisonment.” A real state under the rule of
law, this Israeli state of occupiers!!
In this
context, I recommend the Guardian comment by Harriet Sherwood, in contrast to
the German media report. (1) https://www.theguardian.com/commentisfree/2018/jan/02/ahed-tamimi-israel-occupation-palestinian-trauma
The same can be said about
the homicide of the wheelchair user Ibrahim Abu Thurayeh, who lost both legs
during an air raid of the “Jewish Star of David bombers” in 2008, and was shot
to death by “Jewish defence soldiers” in December, after the protests in the
Gaza Strip. The inhuman response of the army after the investigation succinctly
read: “No moral or professional error was determined.” Like Ahed Tamimi’s
photo, also this image did the rounds as symbol of Palestinian heroism against
the occupation and ethnic cleansing of Palestine.
I would like to know how
long it will take for the German government and the EU to oppose these Israeli
crimes including crimes against international law and human rights, committed
by the so called “only” democracy of the Middle East, and by the so called
“most moral” army of the world.
After Trump’s
Jerusalem decision, every day the Netanyahu regime announces new violations
against international law and human rights, the construction of thousands of
new settler units, the elimination of the relief organisation of Palestinians
and the travel bans for representatives of NGO like “Jewish Voice for Peace”
and of the BDS movement (2) http://www.jewishpress.com/news/israel/boycott/israeli-government-publishes-full-anti-bds-blacklist/2018/01/07/.
It is surprising that
considering this horrifying Israeli cabinet, the CDU/CSU faction is inclined to
submit a decision to the Bundestag, exactly on 27 January, to threaten with
expulsion all Muslim immigrants who call for Jewish hatred, refuse Jewish life
in Germany or doubt about the existence right of Israel.
In my opinion,
this is just shameful  news that avoids
any criticism against Israel! As expected, the president of the Central Council
of German Jews Schuster was excited. He supports the request and thinks that
such a law will protect democracy in Germany.
Mr Schuster, I can do
without this “protection,” since democracy in Germany is at risk because
of Jewish officials like you, who do not dissociate themselves from the Jewish
anti-democratic crimes, committed in the “Jewish State” and turn the mood
against Muslim refugees. You are a shame for all other Jewish citizens in
Germany who still have some decency.
And you, Chancellor
Merkel, defending “Jewish-Christian values”, stand for democratic values in the
“Jewish State,” since the crimes committed in the Jewish State are not
“self-defence,”, but Israeli cruelties you cannot blandish!
After Ibrahim Abu
Thurayeh’s image, the photo of Ahed Tamimi is also doing the rounds. The
legitimate Palestinian resistance is unbroken, and we will support it!