U.S. officials should learn from past trends and anticipate uneven outcomes so it can develop a more effective response for future calamities 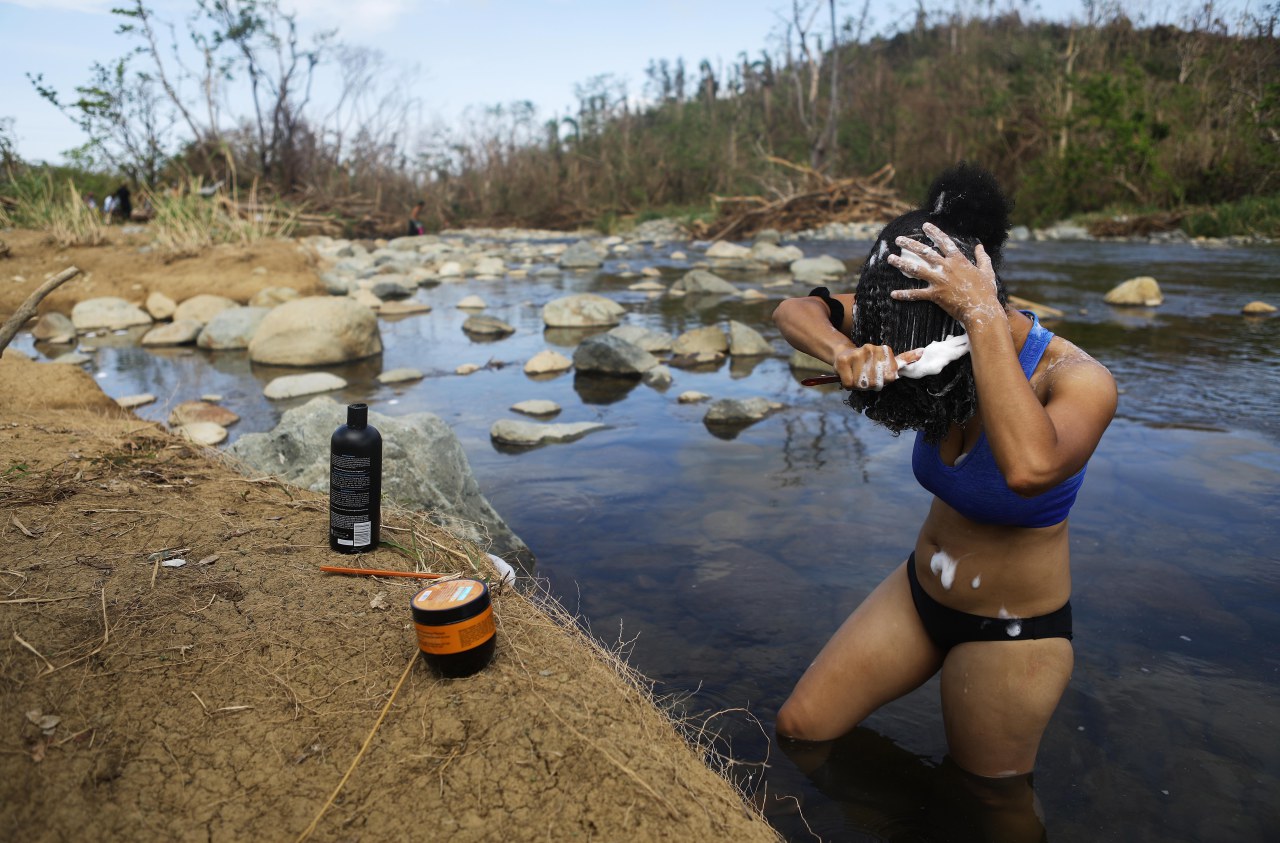 A WOMAN WASHES HER HAIR IN THE ESPIRITU SANTO RIVER MORE THAN TWO WEEKS AFTER HURRICANE MARIA HIT THE ISLAND, ON OCTOBER 8, 2017 IN PALMER, PUERTO RICO. ONLY 11.7 PERCENT OF PUERTO RICO’S ELECTRICITY HAS BEEN RESTORED AND SOME RESIDENTS ARE GOING TO THE RIVER TO COOL OFF, WASH CLOTHES, GATHER WATER OR BATHE. WOMEN ARE OFTEN THE ONES WHO SUPPLY AND MANAGE WATER FOR THEIR FAMILIES, LOCATING WATER SOURCES AND ASSESSING THE QUALITY AND RELIABILITY — A CRITICAL SKILL DURING DISASTERS. (PHOTO BY MARIO TAMA/GETTY IMAGES)

Hurricanes Maria, Irma, and Harvey have devastated Puerto Rico and other parts of the Caribbean as well as the southern United States in recent weeks. But none will be the great social leveler that catastrophic storms are often thought to be. If international experience is a guide, this extreme weather will cause greater suffering for women than for men. And the genders will take different approaches to recovery.

As the United States seeks to help those at home and abroad, it should learn from past trends and anticipate these uneven outcomes so it can develop a more effective response. According to a 2008 study drawn from 141 countries over 21 years, more women die during environmental disasters than men. The 2004 Indian Ocean tsunami killed four times as many women as men. In some cases, women had stayed behind to search for children and relatives. In others, women had never learned to swim.

And disasters’ disproportionate impact on women is not limited to the global south.

During the 1995 Kobe earthquake in Japan, 1.5 times as many women as men lost their lives because many elderly single women lived in poor residential areas that were more heavily damaged. Indeed, these catastrophes do not affect all women equally. Women are more likely to die than men where their socioeconomic status is low, and the effect of women’s poverty applies within countries as well as between them.

Hurricane Andrew, which ravaged Florida in 1992, highlighted these inequalities. Researchers found that women faced a plethora of gendered challenges as they evacuated, sought shelter, and rebuilt their lives. These patterns were “both overlapping and distinct from those experienced in developing countries.” They included increased reports of domestic violence associated with a lack of safe spaces in relief centers and a shortage of housing affordable to low-income women supporting families.

Yet even as poverty, power dynamics, and social roles render women more exposed when disaster strikes, women’s distinct approaches to risk and preparedness also equip them to make crucial contributions to mitigating the impacts of environmental crises.

Research shows that women typically have a heightened perception of risk relative to men. When disaster looms, this makes women more likely to evacuate. “If we were to more successfully harness this one psychosocial difference,” says Roxane Richter, a scholar and emergency medical technician working in disaster aid, “if we strategize, plan, and manage our mitigation efforts with women … that’s the end game — mitigation of impact.”

This could mean, for example, circulating early storm warnings through women’s social networks in addition to reaching people in the formal labor force. Women can also tap into different knowledge and experiences. In developing countries, women are often the ones who supply and manage water for their families, locating water sources and assessing their quality and reliability — a critical skill during disasters. But women’s voices often go unheard in male-dominated disaster-response organizations and government entities. Amid the 2013 floods in Colorado, local officials rarely, if ever, considered gender when addressing vulnerability or resilience among their populations. Even as elderly single-female households were far more likely to apply for government loans in the aftermath of flooding in Louisiana, they were less likely to be approved.Perhaps as a result, women frequently band together to respond to disasters. More than 40 women’s organizations joined together in Miami to create the cross-cultural Women Will Rebuild coalition after Hurricane Andrew to “give voice to women” and to advocate for housing and youth issues they thought were being overlooked in the recovery. These kinds of locally driven initiatives deserve support.

While some data have shown that women are more likely to prepare family members for emergencies and assist the community in long-term recovery, men are more likely to try to rescue strangers when disaster strikes. During Hurricane Mitch in 1998, gendered expectations of men’s heroism in this regard were compounded by men’s lower perceptions of risk, and more men died during this hurricane as a result.

In its foreign policy, the United States recognizes that disasters affect women differently and that they are also well placed to drive recovery. The U.S. National Action Plan on Women, Peace, and Security directs the State Department and USAID to include women in disaster response mechanisms in their work abroad and “integrate gender considerations into relief and recovery efforts.”

At home, elected officials, disaster responders, and community leaders should follow suit. Even as FEMA makes “inclusiveness” one of its guiding principles — with much-needed attention to older adults and those with disabilities — a more differentiated and nuanced approach to gender is also needed. This should apply in all phases of disaster management, from gender-sensitive data collection and analysis to facilitating women’s leadership, voice, and participation in disaster management alongside men’s.

The evidence makes clear that the outcome will be better for men and women alike.