UNITED NATIONS, Oct 25 2017 (IPS) – The vote on the latest American-sponsored resolution in the UN Security Council (UNSC) on Syria was predictable: of the five big powers, China abstained and Russia vetoed, while the US, UK and France voted for it. 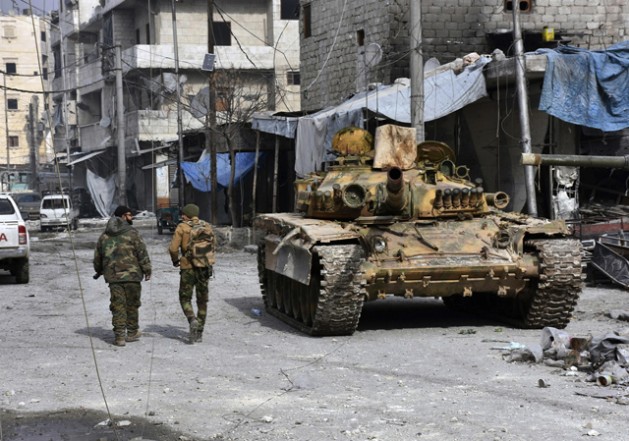 Not surprisingly, the 15-member UNSC continues to lose its political legitimacy as its five veto-wielding members are more intent in protecting their own national interests – and their client states—than the pursuit of world peace.

The Russian veto – the ninth in six years – was aimed at protecting Syria, one of its longstanding allies in the Middle East, currently embroiled in a seven-year-old military conflict.

Stephen Zunes, Professor of Politics & Coordinator of Middle Eastern Studies at the University of San Francisco, told IPS that each of the vetoed resolutions in question were quite reasonable and consistent with international law.

“There is no excuse for any permanent member of the Security Council to abuse of its veto power to shield an allied regime from accountability”.

“It should be noted, however, that the United States has used its veto power no less than 42 times to prevent passage of otherwise-unanimous resolutions regarding Israel, resolutions which were also quite reasonable and consistent with international law,” said Zunes, who has written extensively on the politics of the Security Council.

During the past 35 years, he said, Washington has used its veto power 78 times (in overall total), as compared with 25 times by Moscow.

“So, while the latest Russian veto fully deserves the criticism it is receiving, the United States is hardly in a position to condemn,” he added.

The resolution, which suffered a veto at a UNSC meeting October 24, was aimed at extending the mandate of a joint UN body of the Organization for the Prohibition of Chemical Weapon (OPCW) to identify the perpetrators of chemical-weapons attacks in Syria.

The UNSC comprises five permanent and 10 non-permanent members elected for two years on a system of geographical rotation.

If the resolution had been adopted, it would have extended the OPCW-UN Joint Investigative Mechanism’s (JIM) mandate – established unanimously by the Council in 2015 and set to expire on 17 November – for a further one year.

Following the vote, Ambassador Michele J. Sison, U.S. Deputy Permanent Representative to the United Nations, said the United States “deeply regrets that one member of this Council vetoed against this text, putting political considerations over the misery of Syrian civilians who have suffered and died from the use of chemical weapons. The reasons offered fool no one this morning.”

“We reject this cynicism, and we reaffirm our confidence in these technical experts, men and women who come from many regions, many backgrounds, and many perspectives. They knew their work would be attacked by Syria’s allies – yet have carried out their mandate effectively and responsibly,” she added.

Russian Ambassador Vassily Nebenzia told the Council what was happening was not pleasant. “It stinks, in fact,” because the United States was politicizing the issue.

The Mechanism had been created, with the Russian Federation’s participation, to conduct thorough investigations, and its eagerly awaited report should be seen and discussed calmly before the mandate expired, he said.

“Why put the cart before the horse?”, he asked.

Recalling the attack by the United States against a Syrian air base, he said it had been carried out after a hasty determination that Syria was guilty.

“That rush to judgement had, therefore, been predetermined, as had strategies to impugn the Russian Federation. An early vote was the reason behind politicization,” he added.

Louis Charbonneau, UN director at Human Rights Watch, said with its veto, Russia has once again sent a disturbing message to victims in Syria, signaling that Syrian government forces can continue to use chemical weapons with impunity and free of international scrutiny.

“Russia has supported investigations into the use of lethal chemicals in Syria, but this time has chosen to protect its ally in Damascus. UN member states should find a way to ensure that the investigation of Syrian chemical attacks continues so perpetrators can be held to account,” he added.

Russia’s ninth veto in the Security Council has only re-affirmed its strong and longstanding political, economic and military interests in Syria, going back to the days of President Hafez al-Assad, father of the current President, Bashar al-Assad.

The relations were strengthened by a Treaty of Friendship and Cooperation between the two countries, a treaty which continued to be renewed every 25 years.

First signed with the then Soviet Union back in October 1970, the treaty provided Syria with long-term credits and outright gifts of Soviet weaponry.

Asked how heavily Syria was dependent on Russian arms, Pieter Wezeman, Senior Researcher Arms and Military Expenditure Programme at the Stockholm International Peace Research Institute (SIPRI) told IPS that Russia has been, by far, the most important arms supplier to Syria for decades.

However, he pointed out, such arms supplies have fluctuated strongly, from the 1990s to 2008, including Syrian arms imports in general, and from Russia, were low.

After an agreement with Russia about the large debts Syria owed Russia, several significant contracts for new military hardware were signed in 2007.

Some of the equipment was delivered before the Syrian government lost control over large parts of Syria around 2013. Other equipment on order have not been delivered. In recent years, Syrian arms imports from Russia have been very modest, he added.

Iran seems to have supplied artillery rockets and probably ammunition in recent years. There do not seem to be any other countries involved in supplying significant numbers of weapons to the Assad regime in recent years, he added.