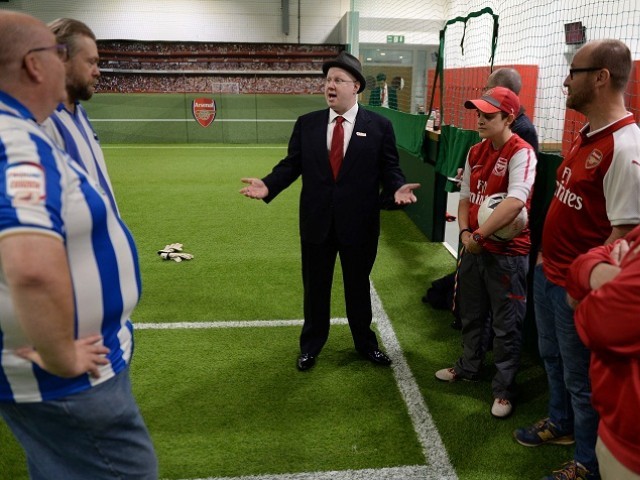 LONDON: The first active footballer to come out as gay will be an “icon” who could reap huge financial rewards but the British game remains a hostile environment for homosexual players.

That’s the view of gay British comedian Matt Lucas — best known for the series “Little Britain” — who spoke to AFP in his role as patron of Arsenal’s Gay Gooners supporters’ group.

“I don’t think we are about to have anyone come out but when he finally does there will be challenges,” said Lucas, who also played Tweedledee/Tweedledum in “Alice in Wonderland” and “Alice Through the Looking Glass”.

“I don’t know 100 percent what they are, but what I will say is the first player who comes out will be a superstar who will speak to people in the game who aren’t spoken to — and speak to those beyond the game,” he added. “They will get every advertising contract out there and be really iconic.”

Lucas, 43, concedes football stadiums are less scary places for gay supporters than they were when he was growing up but says it is not yet an environment in which players can feel confident enough to admit they are homosexual.

“It is tough,” said Lucas, who took part in a penalty shootout between the Gay Gooners and their Brighton counterparts the Proud Seagulls at Arsenal’s community centre before Sunday’s Premier League clash at the Emirates in north London.

“There are so many things that can go against you in football, so you don’t want to embrace anything that can be seen as a weakness,” he explained. “We are not yet at that place inside football where people feel strong enough to come out but I think it will happen in the next five to 10 years.”

Jonathan Green, a member of the Gay Gooners, agrees with Lucas that coming out is not an option for players at the moment, although he believes if the support structure were put in place by employers, the situation would change.

“Football matches are a bit like pantomime — the booing and the hissing and ‘he’s behind you’ sort of remarks,” said Green, who works in IT for an oil company. “But if you find something out about a player’s private life you will use it to get under their skin. What are they (the Premier League and the Football Association) doing about it? Not a lot until recently. Arsenal can’t be more supportive. They come to Pride and are heavily involved in loads of other activities.”