Putin joins ranks of Climate Denialists in support of Trump 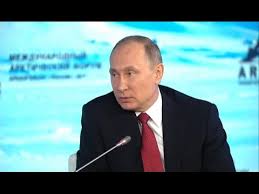 Russian President Vladimir Putin has abruptly become a climate-change denialist, apparently under the influence of key figures in the Trump administration, which Putin likely helped install. The spread of anti-intellectualism and the war on science has been a worrisome feature of the American right wing for some time, but now it appears to be spreading even to Russia.
Of course, this wouldn’t be the first anti-scientific stand taken in Moscow. Trofim Lysenko, the Soviet-era biologist, rejected Darwinian natural selection in favor of a form of Lamarckian evolutionary theory that held that animals can acquire characteristics as individuals through experience and then pass those directly to their offspring.
The 19th century Muslim anti-imperial activist, Jamal al-Din Afghani, refuted Lamarck’s version of biology in a debate with Ernest Renan by pointing out that Jews and Muslims had been circumcising their male children for centuries but that no child of either of these groups had ever been born circumcised.
Both the US and now the Russian Federation are becoming neo-Lysenkoist states.