April 23, 2017February 23, 2021 by Milena Rampoldi
By Denise Nanni and Milena Rampoldi,
ProMosaik. In the following our interview with Musarait of the African Initiatives for Relief &
Development, working for the support of communities in Uganda and other African countries. We asked
Musarait about the main obstacles to development in Uganda. And we talked about
the main activities of AIRD in refugee camps. 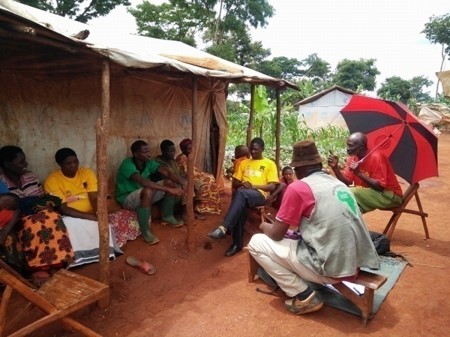 AIRD Tanzania staff in consultation with the refugee community before construction of transitional shelter s in Nyarugusu
What
are the main development and economic issues in Uganda today?
The economy
of Uganda has great potential for growth but is hindered by many
challenges.
Uganda’s
economy is weak due to the following reasons:
Uganda
is a land locked country located in East Africa. The geographical location puts
the country at a disadvantage compared to its coastal neighbours when competing
in global markets. Uganda also has to bear high transportation costs while
importing and exporting goods over long distances on land.
The
country faces high levels of unemployment, an issue that is affecting the
mostly the youth. In 2015, the Uganda Bureau of Statistics revealed that 64% of
the total unemployed persons were the youth aged between 18-30 years. This is
hampering the growth of the economy since most of the able bodied, youthful men
and women are not contributing to the development of the country in terms of
labour.
The
industrial growth in Uganda is moving at a snail’s speed, another contributing
factor to high levels of unemployment. More industries in the country would
create job opportunities for some of the unemployed youth. The low level of
industrialization makes the country heavily dependent on imports while
exporting less, resulting in huge trade deficits.
Transport
and infrastructure also make a fundamental contribution to the growth of an
economy. Uganda’s infrastructure and road network is developed only in the city
centres such as Kampala, Jinja, Entebbe, Mbarara, Mbale, Arua and other towns.
People in the remote areas still face challenges in accessing services such as
health, education and markets as a result of poor road networks.
Additionally,
Uganda is predominantly an agricultural country but this is one of the least
developed sectors. Failure by the government to modernize agriculture and
prioritize it as a major cash cow for the country has also greatly contributed
to the stagnation of the country’s economy. 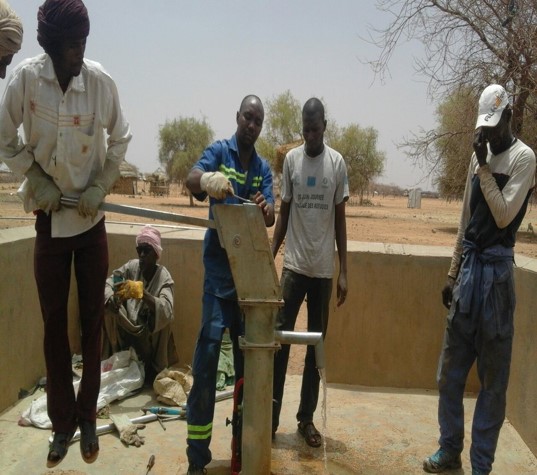 AIRD Water technical staff training Malian refugees in Goudebo camp how to use and maintain boreholes in 2016Agriculture
is still viewed as an activity for the informal sector which is comprised of
the illiterate who still use rudimentary tools for farming and practice
subsistence farming. This is being done on a large scale as opposed to
commercial farming that would contribute to the growth of economy.

In
recent years, Uganda also had to shelter many refugees and asylum seekers due
to the ongoing conflicts in neighbouring states of DRC, South Sudan, Burundi,
and Somalia. At the same time, Uganda has a high population growth rate but
with limited resources. The addition of refugees and asylum seekers in the
country has out stretched the resources.
The
situation is worsening because of the ongoing conflict in South Sudan that
started in 2015 forcing many South Sudanese to seek refuge in Uganda. The
number of new arrivals into the country is increasing daily because of the
famine resulting from the prolonged war.
What are the events that brought to the foundation of AIRD and what are
its activities?
African Initiatives for Relief and
Development was established with an objective of offering relief aid and
development solutions to persons of concern. The refugee situation in Africa
has been surging as a result of armed conflicts, wars, and natural disasters in
various African states. This created a service gap and there weren’t many
credible organizations to provide emergency response and meet the needs of the
persons of concern. Armoured with vast experience in disaster management three
visionaries of AIRD are Mathias
Temesgen, Gizaw Shibru, and Menna Tewahade. And they established AIRD to
provide quality and timely services to the persons of concern.
AIRD started
with one country program in Uganda but has grown and expanded to providing
similar services to persons of concern in 9 countries in Africa. They include:
Burkina Faso, Cameroon, Central African Republic, Chad, Democratic Republic of
Congo, Liberia, Republic of Congo, Tanzania and Uganda. For 10 years now, AIRD
has worked towards achieving this objective, constantly looking for ways to
serve better and meet the needs of all the targeted beneficiaries. This has
been possible due to the good relationships AIRD has fostered with partners and
the respective governments in the countries of operation. The organization is
also working towards extension of its expertise in other African countries
faced with the refugee crisis. 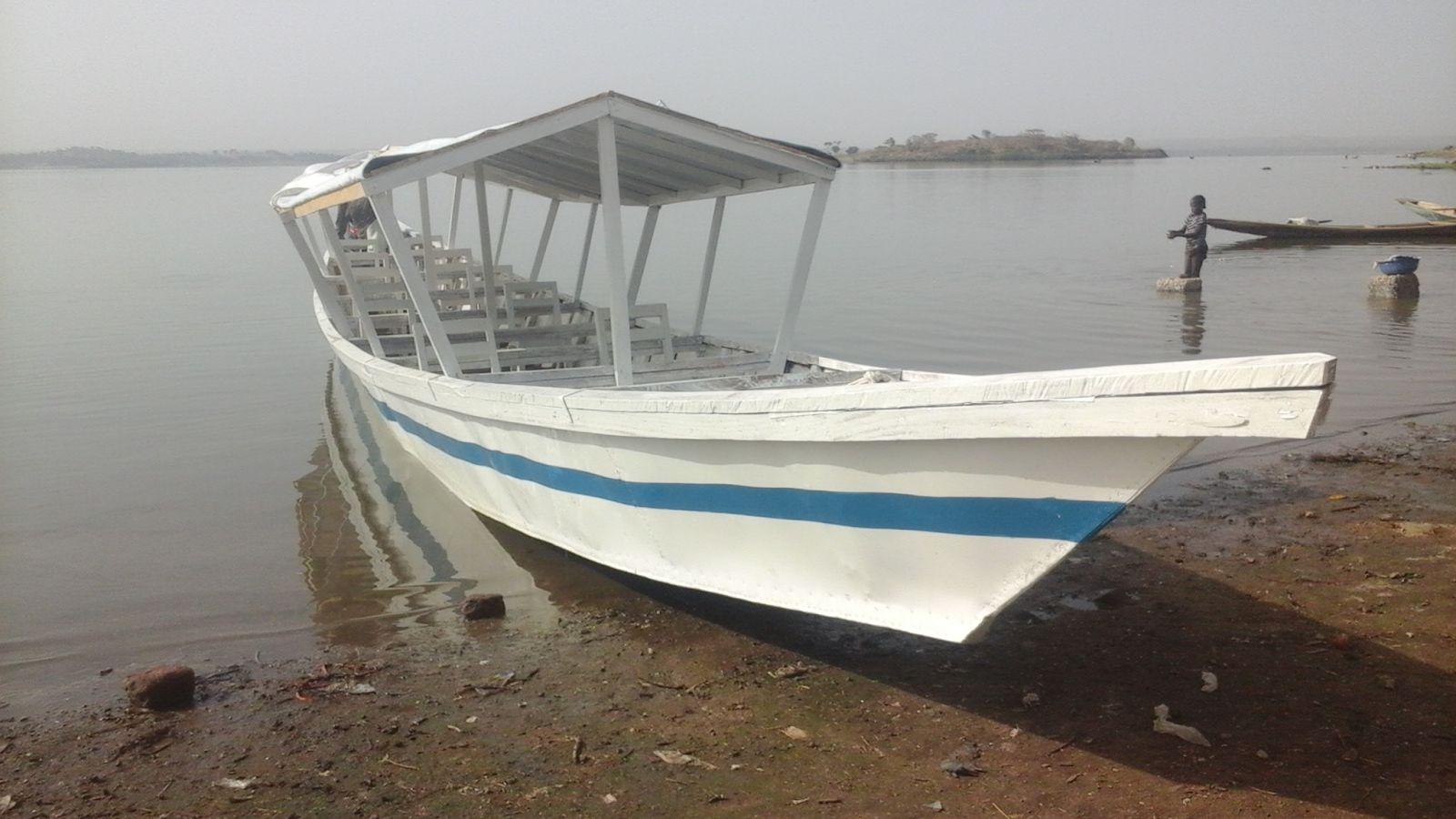 Boat constructed by Chad program to assist refugees living in Mayo Kebi access health facilities and Lere trading centre via L. Lere in 2016
AIRD specializes in provision of logistical support, supply chain
management and construction and infrastructure in camps and refugee
settlements. This involves the following activities:
Warehousing: AIRD is responsible for the safe keeping
and storage of NFIs and food items.  This involves carrying out regular
fumigation, ensuring the warehouses are kept clean, and professional staff are
in place to manage and maintain the facilities.
Fuel management: AIRD monitors and evaluates the
operation of fuel stations and fuel consumption assets used by UNHCR and
partners during operations. This also involves fuel distribution and training
of staff to manage the fuelling system efficiently.
Transport management: The organization
ensures that various suitable means of transport are availed to transport the
NFI’s, partner staff and any other items. The fleet includes, trucks, light
vehicles such as buses, motor bikes and boats.
Workshop management: It is through this activity, AIRD
maintains and manages workshops in various areas of operation to provide
general and regular maintenance of vehicles and other items such as generators.
Construction and infrastructure: AIRD
has a highly experienced team of construction experts and engineers responsible
for the construction, development and rehabilitation of different community
infrastructure. This includes: roads, shelters, boreholes, schools, markets,
health centres, nutrition shelters, offices among other infrastructures.
Drug management: AIRD has a drug management system in
place to facilitate the procurement, storage, and distribution of drugs to
designated health centres caring for persons of concern. This activity is
mainly implemented in Uganda.
Voluntary repatriation and reintegration: AIRD
facilitates the return of refugees to countries of origin and resettlement for
those that have been granted asylum. The organization ensures safe
transportation and management of transit centres, providing hot meals and
accommodation until the refugees arrive at their destination.
WASH: AIRD has constructed boreholes in
different camps and settlements to provide the persons of concern with clean
water. AIRD also carries out water treatment, trucking and distribution in
areas where water sources are hard to reach.
As
per the organization’s strategic plan to diversify to other services like
livelihood, environment and WASH ,some of programs are already engaged in
provision of these services. In Tanzania, AIRD is currently implementing a
livelihood project funded by Australian Aid, in Liberia last year, AIRD had a
tree planting project and another was carried out in Lusenda camp in DRC. 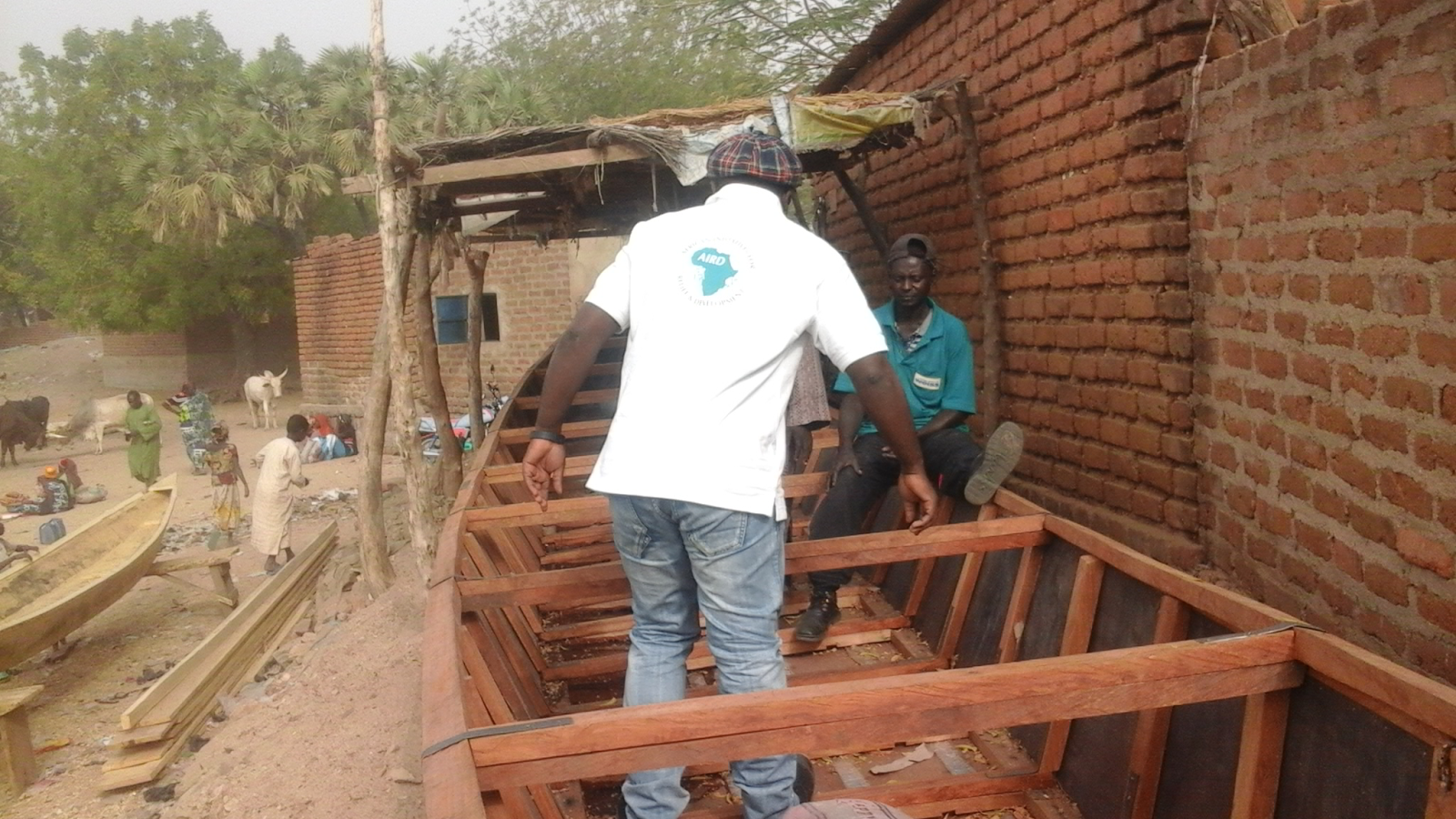 Boat during the initial stages of construction by Chad program
How do you select the communities where you intervene? Do you establish
local partnerships?
AIRD
focuses on helping persons of concern by providing them with development
solutions to the challenges they face through various activities we are engaged
in. We respond to calls requiring our expertise. This is done especially in
refugee camps and settlements.
Yes,
we have local partnerships starting from the line ministries in the different
countries we work in. This is done to understand how the different countries
work to ease the delivery of services to the beneficiaries.
AIRD
also understands the need to involve the affected communities in the
implementation process of the different projects. Local community leaders are
engaged at different stages of the work to ensure that the activities AIRD
provides meet their urgent needs. 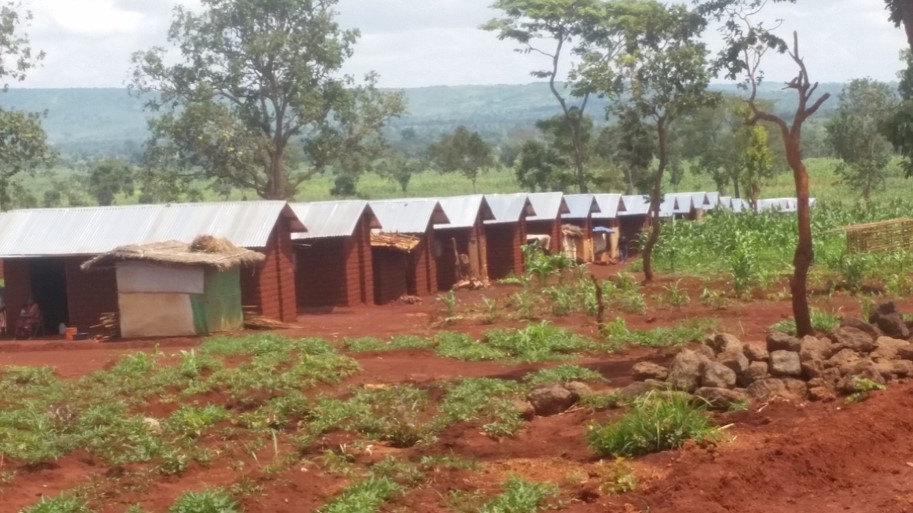 Complete and occupied  transitional shelters in Nyarugusu constructed by AIRD in  2016.

At what level do you cooperate with UNHCR?
We
have been an implementing partner of UNHCR for 10 years now. This is because of
the strong partnership AIRD has established with UNHCR. AIRD has been able to
maintain this relationship through its core values of good internal governance,
transparency, accountability, professionalism sustainability, partnership, and
innovation.
Do you cooperate with local authorities and institutions? If yes, how?
AIRD
cooperates with local authorities. We acknowledge that policies on persons of
interest differ with different countries and this calls for an understanding
with the respective government ministries. At the government level, we engage
with these authorities on policy, our work and the intended impact. This helps
us understand the needs of the targeted communities and how best they can be
met.  At local levels, AIRD also engages with the community leadership to
determine the immediate needs of the affected population. 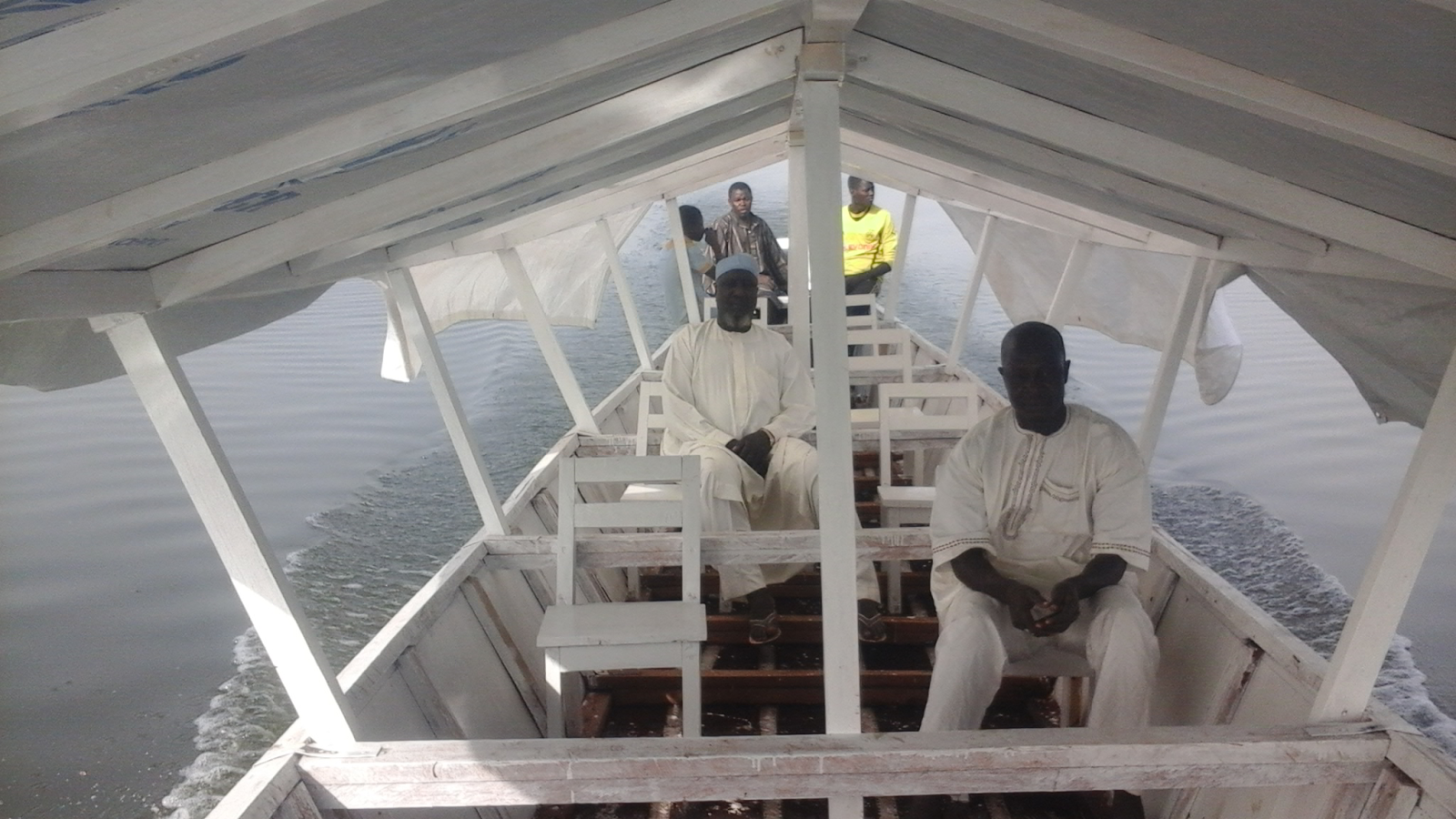