The “Final Solution” (Endlösung) of the Palestinian Question is coming closer and closer!

by Evelyn Hecht-Galinski, Sicht vom Hochblauen, 01 February 2017, English Translation by Milena Rampoldi, ProMosaik. If the Israeli Knesset approves the legalisation of Jewish settlements
on stolen Palestinian land, then the Zionist concept of a “Greater Israel” is
getting closer to becoming a reality. All the more so since Donald Trump’s
election as U.S. president will apparently support the Netanyahu government’s
unscrupulous ethnic cleansing of the Palestinian people as the “final solution”
for the judaisation of all Palestine. 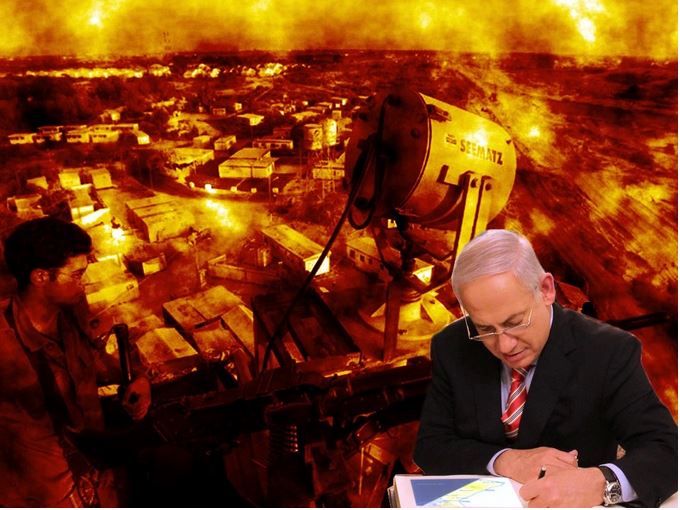 The Zionist concept of a “Greater Israel” can only be achieved by
hijacking Judaism and exploiting Biblical narratives to legitimise claims to the
“Promised Land” as a state exclusively for Jews.  Since its establishment, Israel has in its
quest for the Judaisation of the Holy land left a trail of death and
destruction in its barbarous wake. Announcements of new settlements are now an
almost daily occurrence without there being even a token hypocritical protest
from a Trump administration packed with neoconservative Zionists.

So yet again it is the forgotten Palestinians who suffer while the
hypocritical West with its Israel induced Islamophobic obsession remains
focussed on the phony “War on Terror” instead of addressing Israel’s
irrefutable crimes against humanity.

It has always been the “White Race” with its racist capacity to
articulate that has entrenched the premise of “White Superiority.” What right
do Aryans have to wage wars against the Black, Red, and Yellow races; what makes
Aryans superior to non-Aryans of different colours and ethnicity; and why
should such racist perceptions be fostered and tolerated from childhood, through
to adolescence and adulthood? All genocides have stemmed from racist
perceptions of superiority – be it by a “master race” or a “chosen people” –
that have variously resulted in the mass murder the world over including
American Indians, the Herero people in Africa, the victims of the Indian caste
system, and Jews during the Holocaust.

Even if my list is incomplete, I would like stress the importance of remembering
a subject that has concerned me for years — and which should not be allowed to
descend into oblivion—because it involves almost 70 years of continuous
barbarous displacement and ethnic cleansing of the Palestinians to make way for
an insidiously  illegal occupation by
Zionist Jewish colonisers.

This long history of colonisation by the “only democracy in the Middle
East” – which outrageously claims to speak for all Jews in diaspora – is
appalling especially when supported by the newly elected so-called President of
the United States who has wasted no time in undermining all democratic
principles and values. Such amoral U.S. presidential support has unleashed an unprecedented
acceleration of settlement building with thousands of more apartments.

One of the very few who people who was happy to welcome the change of
occupant in the White House was Benjamin Netanyahu who was also the only
Western leader to welcome Trump’s intention of constructing a wall along the
border with Mexico and discriminating against Muslims and refugees. Israel’s
applause for Trump’s conduct, however, is understandable considering the fact
that the “Jewish State” has for many decades been embracing similar policies
with equally arrogant impunity.

When it comes to building separation walls; illegally encroaching on
Palestinian land; and segregating Palestinians while expelling refugees and
asylum seekers, Israel is second to none and reigns as the undisputed champion
of Apartheid.

Jews fleeing Nazi persecution were given refuge in many countries
including the United States which more than any other country became the home
of millions of persecuted refugees and immigrants including Donald Trump’s
Scottish mother. Have Kushner, and Friedman, and their friends forgotten this
fact? While seven Muslim states were included in Trump’s ban, Saudi Arabia, the
Gulf States, Pakistan, and Turkey were excluded. Saudi Arabia is an important
partner for the real estate Mogul Trump; is involved in several companies and
Joint Ventures; and is notorious for exporting terror – like bombing bad Houthi
rebels in Yemen — with weaponry generously supplied for the “War on Terror” by
Germany and the U.S. who require Saudi oil.

In the meantime, even the “Jewish State” has initiated a “community of
values” with the Saudis, all for the purpose of the war against terror. In a
phone call the Saudis convinced Trump to limit a strict implementation of the
nuclear deal with Iran. Trump and King Salman absolutely agreed to commonly
move against the “destabilizing activities” of Iran.

Let us see how the friend Netanyahu will react during his forthcoming visit
to Washington.

Now Trump wants to comply with the refugee agreement made with
Australia. However, I am asking myself how Trump will distinguish between
Christian and Muslim refugees.

Actually the worst characteristic of Trump seems to be his dangerous
unpredictability. In no time at all he has signed “Executive Orders” which do not
mean anything positive for the world peace. Trump continues at the point where
his predecessor Obama started: and drone flights and assassinations of
civilians are the sad result. But in the end “we are the good ones” fighting
for our values.

Trump operates according to the notorious German slogan of all
National-Socialists saying “I decide who is Muslim and who is not”.

What Palestine needs, is an alliance complying with the Declaration of
Human Rights. Palestine also needs a broad civil rights movement, able to
struggle for new elections for a free Palestine with an undivided capital
Jerusalem. Only after that the relocation of the embassies can start, not now
as unilateral provocation of US-Christian-Zionist Trump hardliners, guided by
Netanyahu’s regime.

In the end, I would like to refer to an interview in DLF in which the so
applauded David Grossman, who in Germany is called “peace activist” exposes
more than racist ideas. Grossman stressed on the importance of a strong army to
defence Israel. Does he want to defence the occupation? Grossman considers
himself as more hungry for peace as the people in Europe because in his life he
has not lived one day of real peace. Why does Grossman not ask about the
reasons of this absence of peace? Israel could have lived in peace for a long
time now, but it did all to promote illegal occupation and wars. Mr Grossman
your claim for a normal life can only be achieved if you do not brutally
oppress another people! For Grossmann the idea of leaving in a state which is
not a “Jewish State” in which he would be part of a minority, is horrifying! He
only believes in a Jewish Home and cannot imagine that in a common state they
could be a Palestinian as finance minister, as minister of education, as police
chief, or as chief of the national secret service Shin Bet. Yeh, what to say
about it? Grossman admires Merkel for her refugees’ acceptance, and Germany
should stay relaxed. Grossmann does not lose one word about the “Jewish State”
and his treatment of refugees. Oh yes, Grossmann would not like to be in a
minority among Palestinians.

This interviewed showed once against the racist Apartheid mentality of
Jewish Israelis! They feel superior and are walled in their Apartheid life. It
was a sad and scaring interview, appropriate to new US president Trump and his
politics. (1)

Yes, the “Final Solution (Endlösung)” of the Palestinian Question is
coming closer and closer, and it does not mean anything good for Palestine!