No Need For Trump To Build A Wall: He Can Scare off Mexicans With Some True Facts About Life In America

November 23, 2016February 23, 2021 by Milena Rampoldi
by William Hanna, November 22, 2016. Despite the American people’s deluded perception of their own “exceptionality” , the stark reality is that their nation’s decline — about to be accelerated by their choice of a “Dangerously Unhinged Donald” for the next “President” — is now hurtling towards the point of irreversible destruction of everything that they and their “We the People” Constitution supposedly represent. Unfortunately that decline — fuelled by political hypocrisy, pandemic double standards, corporate reliance on endless wars, mainstream media disregard for “the truth, the whole truth, and nothing but the truth,” and the surrender of “We the People” governance to powerful pro-Israel Jewish lobby groups — will inevitably also adversely affect the rest of humanity most of whom are already subject to a universal indifference for every aspect of international law including those relating to human rights. 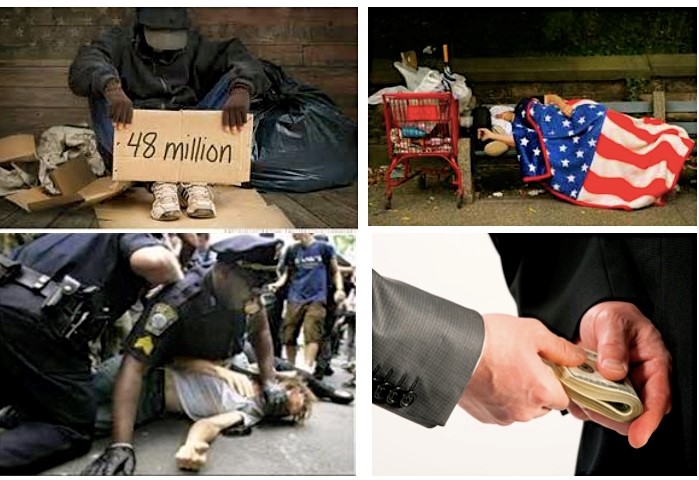 The 1924 Geneva Declaration on the Rights
of the Child stated that “mankind owes to the child the best it has to give.”  (http://www.countercurrents.org/hanna271014.htm)
“Today the world is the victim of propaganda because people are
not intellectually competent. More than anything the United States needs
effective citizens competent to do their own thinking.”
William Mather Lewis

As the world’s beacon of “hypocritical
democracy,” The U.S. has for example not been an impartial mediator in the
Palestinian-Israeli conflict, but a knowingly and wilfully active participant
in the heinous violations being perpetrated by Israel against the Palestinian
people. As the irrefutable supporter of such violations which inflict
unimaginable suffering on Palestinians by an Apartheid Jewish state, the U.S.,
has continually endeavoured to escape accountability by preventing the
Palestinians from accessing any internationally recognised recourse for justice
such as the International Court of Justice (ICJ) and the International Criminal
Court (ICC). When a major power — especially one that is both racist and guilty
of war crimes — such as the U.S. can prevent an indigenous and stateless people
from unhindered access to the justice which as an inalienable right is
essential for “Life, Liberty and the pursuit of Happiness,” then there is
something very drastically wrong with the effectiveness of international law
and the institutions charged with its enforcement.
As for President-elect Donald Trump’s
threat to build a wall to keep the Mexican drug-taking and rapist hordes out of
America, Trump could instead ensure that Mexicans are aware that the U.S.
prison population is first — out of 224 countries — with 2.3 million prisoners
from a U.S. population of some 325 million. Only China comes close with 1.66
million prisoners from a population of 1.2 billion. Furthermore, a new study
has revealed that the true nature of the American criminal Justice system is
racist with a large disparity between imprisonment rates for African-Americans,
Hispanics, and whites. (http://uk.businessinsider.com/study-finds-huge-racial-disparity-in-americas-prisons-2016-6?r=US&IR=T/#incarceration-ratio-for-blacks-versus-whites-by-state-1)
Other landmark U.S. achievements which
could discourage Mexicans include the U.S. being ranked 16th out of 23
countries in Education and Skills; being ranked as the fourth highest in income
inequality in the world; being ranked by Transparency International as 17th out
of 175 in corruption; being ranked 20th out of 178 countries in Stability which
according to the Fragile States Index assesses factors such as inequality,
corruption, and factionalism; and being ranked 16th out of 133 countries in the
social progress index which broadly measures social well-being with an index
comprising of 52 economic indicators such as access to clean water and air, to
advanced education, to basic knowledge, and to safety.
The fallacy of “American exceptionalism”
which maintains that the U.S. is qualitatively different, and arguably
superior, to all other nations has persisted despite the fact that the
government happily spends over $600 billion on the military —
or more than 54 percent of all federal annual discretionary spending
— in a country where more than
50 million Americans live below the poverty line; where 48 million of them
receive food stamps; where more than one in five children is on food stamps and
living in poverty; where an astounding 15% of senior citizens live in poverty;
where ethnic poverty rates are 28% for Blacks, 24% for Hispanics, 10.5% for
Asians, and 10% for Whites; where being Black lowers one’s credit score by 71
Points; where a new AFL-CIO study on corporate salaries found that CEOs made
335 times more than the average employee who earned $36,875 while the the big
company CEOs got approximately $12,400,000; where according to a Forbes
survey 56% of Americans have less than $1,000 in their combined cheque and
savings bank accounts; and where an observation once made in April 4, 1967 by
Martin Luther King Jr. has become a reality: “A nation that continues year
after year to spend more money on military defence than on programs of social
uplift is approaching spiritual doom.”
In order for the U.S. to become a more
enlightened, humane, and tolerant nation, the American people must first accept
the actuality of their unexceptionality and recognise that their cultural
malady cannot be cured by a racist witch doctor “Trumpism,” but by some
extensive surgery to remove the cancer at the heart of their very sick society.
We have become a Nazi monster in the eyes of the world — bullies and bastards who would rather kill
than live peacefully. We are whores for power and oil with hate and fear in our
hearts.
Hunter S. Thompson (1937-2005) American journalist and author.
William Hanna is a freelance writer with published
books the Hiramic Brotherhood of the Third Temple and The Tragedy of Palestine and its Children. Purchase information, sample chapters, other
articles, and contact details at:
(http://www.hiramicbrotherhood.com/)