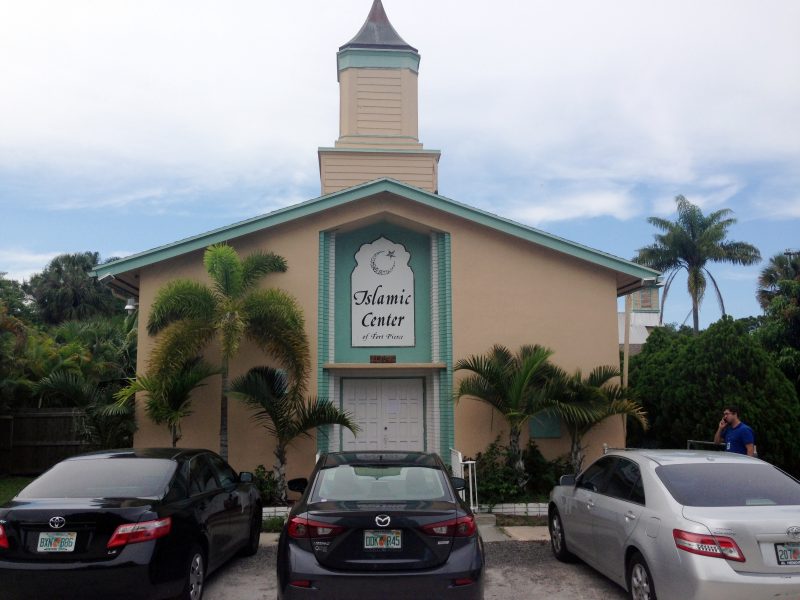 The Islamic Center of Fort Pierce, Fla., is seen in Fort Pierce, Fla.,
Sunday, June 12, 2016. The mosque is where Omar Mateen worshiped.
Mateen killed 50 people at a nightclub in Orlando, Fla.,
on Sunday, June 12, 2016. (AP Photo/Ben Fox)
The mosque attended by Omar Mateen, the Orlando man who killed 49 people at a gay nightclub in June, was intentionally set on fire early Monday morning, according to the St. Lucie County Sheriff’s Office.
The sheriff’s office received a call at 12:31 a.m. that the Islamic Center of Fort Pierce was on fire, and early evidence revealed the fire was intentional.
“Video captured at the Fort Pierce Islamic Center shows an individual approached the east side of the building just moments before a flash is seen and the fire starts,” according to a statement on Facebook. “The Sheriff’s Office is actively investigating this as an arson with the assistance of the St. Lucie County Fire District, the Florida State Fire Marshall’s Office, the Bureau of Alcohol, Tobacco and Firearms and the Federal Bureau of Investigations.”
No one was inside the center when the fire was set, and photos shared by the sheriff’s office show that the building was still standing after the fire was extinguished.
Mateen had attended the Fort Pierce Islamic Center since 2003, according to CNN. The fire is just the latest in a long list of anti-Islam incidents occurring across the country. “A fire at any place of worship is alarming, regardless of the circumstances,” the sheriff’s office said in a statement Monday morning.
“Right now, I don’t want to speculate on a motive,” Major David Thompson told media. “We all know the implications of the date and the time of year, that this is the 9/11 anniversary. Is that related? I would not want to speculate, but certainly that it is in the back of our minds.”
The attack also occurred on the Muslim holiday of Eid al-Adha, for which the center had been preparing to receive worshipers.
“Omar used to come here, and because everybody knows that he had [an] attitude problem, we would kind of withdraw ourselves from him,” Imam Syed Shafeeq Rahman told CNN in an interview earlier this year. 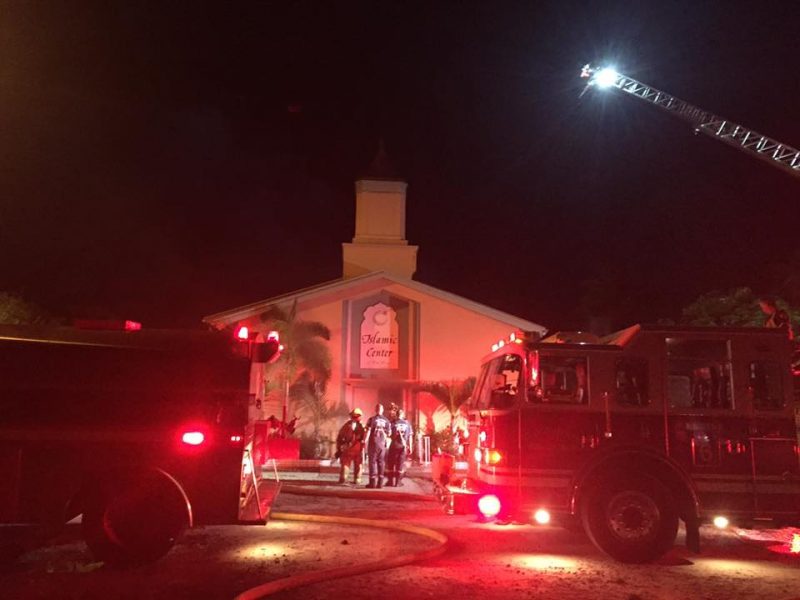 Firemen outside the Islamic Center of Fort Pierce, Fla.,
The mosque is where Omar Mateen worshiped.
(Facebook / St. Lucie County Sheriff’s Office)
“Every Imam will be in this position in the future because mosques are open public places. Hundreds of people come; we don’t know their actions [or] what they watch on the internet, Rahman said. “As far as we here in Fort Pierce are concerned, we [are] very conscious — consciously speaking about peace, about love, about unity. We came to this country; this country gave us everything. And this is against Islamic law that you can benefit from a community, from a country, and then you are doing conspiracies against it.”
After Mateen carried out one of the worst mass shootings in U.S. history, the center cooperated with the FBI and local police in their investigations, condemned Mateen, and held a blood drive to help the victims. Nonetheless, it still received intimidating visits and phone calls (including racial slurs) — and was refused a security detail to protect worshipers by authorities. Instead, it reportedly hired private guards for protection.
Not including this attack, ThinkProgress has found at least 103 other anti-Islam incidents across the United States since the attacks in Paris in November of last year, including 39 protests or attacks on houses of worship. ThinkProgress also found a spike in attacks on houses of worship after the shooting in Orlando.