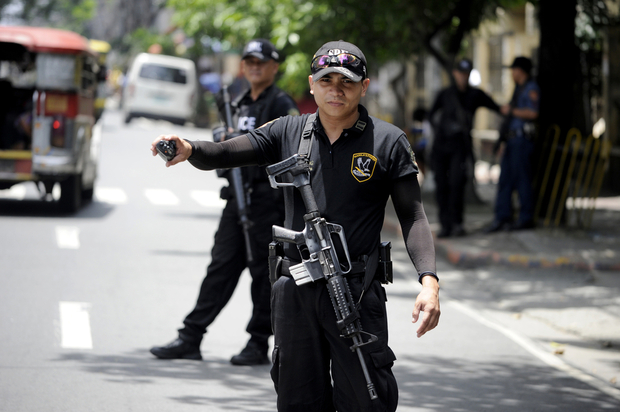 Philippine authorities on Saturday blamed a notorious group of Islamic militants for the bombing of a night market in President Rodrigo Duterte’s home town that killed at least 14 people.

An improvised explosive device tore through the bustling market in the heart of Davao city and close to one of its top hotels just before 11:00pm (1500 GMT) on Friday.

Authorities said Abu Sayyaf, a band of militants that has declared allegiance to the Islamic State group, most likely carried out the attack in response to a military offensive launched against it last week.

National Defence Secretary Delfin Lorenzana said Abu Sayyaf had struck back after suffering heavy casualties on its stronghold of Jolo island about 900 kilometres from Davao.

“We have predicted this and warned our troops accordingly, but the enemy is also adept at using the democratic space granted by our constitution to move around freely and unimpeded to sow terror,” Lorenzana said in a statement.

Duterte, who was in Davao at the time of the attack but not near the market, told reporters before dawn on Saturday that it was an act of terrorism, as he announced extra powers for the military.

At least 14 people were killed and another 67 were wounded in the explosion, police said. Sixteen of the injured were in critical condition, a local hospital director told reporters.

“The force just hurled me. I practically flew in the air,” Adrian Abilanosa told AFP shortly after the attack as bodies lay strewn amid broken plastic tables and chairs.

Davao is the biggest city in the southern Philippines, with a population of about two million people. It is about 1,500 kilometres from the capital of Manila.

The city is part of the southern region of Mindanao, where Islamic militants have waged a decades-long separatist insurgency that has claimed more than 120,000 lives.

Duterte had been mayor of Davao for most of the past two decades before winning national elections in a landslide this year and being sworn in as president on 30 June.

Duterte has in recent weeks pursued peace talks with the two main Muslim rebel groups, which each has thousands of armed followers. Their leaders have said they want to broker a lasting peace.

Abu Sayyaf, a much smaller and hardline group infamous for kidnapping foreigners to extract ransoms, has rejected Duterte’s peace overtures.

In response, Duterte deployed thousands of troops onto the small and remote island of Jolo to “destroy” the group.

On Saturday morning, Duterte declared a national “state of lawlessness,” which his security adviser said gave the military extra powers to conduct law enforcement operations normally done only by the police.

While Davao has been regarded as relatively safe compared with other parts of Mindanao, Abu Sayyaf and other Islamic militant groups have carried out deadly attacks there in the past.

In 2003, two bomb attacks blamed on Muslim rebels at Davao’s airport and the city’s port within a month of each other killed about 40 people.

Before his daughter and defence secretary blamed Abu Sayyaf, Duterte also raised the possibility of drug lords carrying out the attack as a way of fighting back against his war on crime.

Duterte has made eradicating illegal drugs the top priority of the beginning of his presidency.

Security forces have conducted raids in communities throughout the country to arrest or kill drug traffickers.

More than 2,000 people have died in the war on crime, drawing widespread international condemnation over an apparent wave of extrajudicial killings.