Under the deal, Israel will pay Turkey $20m in compensation for a botched 2010 Israeli commando raid on a Gaza-bound Turkish aid ship 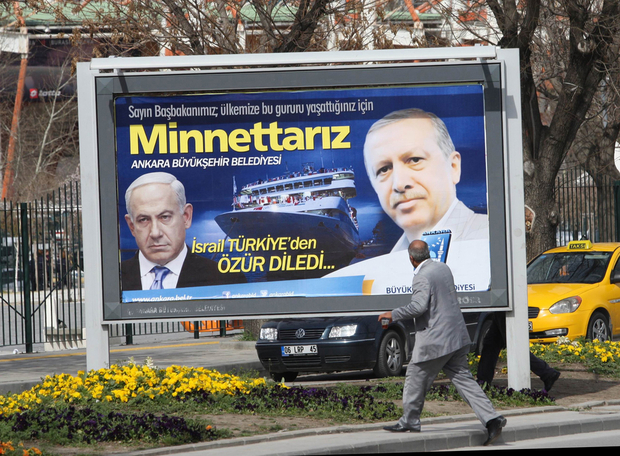 A 2013 billboard in Ankara reads ‘We are grateful to you’ Turkish Prime Minister Recep Tayyip Erdogan, three days after Israeli Prime Minister Benjamin Netanyahu apologised over the death of nine Turkish citizens on the Gaza-bound flotilla in 2010 (AFP)

The Turkish parliament approved a deal to normalise ties with Israel after a delay caused by last month’s attempted coup, state-run media reported on Saturday.

Lawmakers ratified agreement to restore relations between the two former close regional allies after a six-year rift, before parliament was due to go into summer recess.

Israel will hand Turkey a “lump sum” within 25 working days of the agreement coming into force, the agency said, which families of the victims will receive in due course.

Under the terms of the deal, it was agreed that individual Israeli citizens or those acting on behalf of the Israeli government would not be held liable – either criminally or financially – for the raid, Anadolu said.

Israeli cabinet ministers approved the deal with Turkey in late June, but Ankara did not send it to parliament because of time pressure following the 15 July attempted putsch by a rogue military faction.

Israel was quick to give its support to the Turkish government in the aftermath of the coup bid, condemning the action while repeating its faith in the reconciliation process between the two countries.

Now the deal has been approved, the two countries are expected to begin the process of exchanging ambassadors to fully restore diplomatic ties.

The agreement also involves an easing of the naval blockade on the Hamas-controlled Gaza Strip allowing Turkey to deliver humanitarian aid to Palestinians there via Israel’s Ashdod port.

Israeli Prime Minister Benjamin Netanyahu has previously spoken about the economic advantages of improved relations, discussing the possibility of a pipeline to Turkey to export Israeli gas.

The rapprochement between the two countries came after secret talks held in December 2014 with two more rounds in February 2015 in Geneva and April this year in London.

Turkey appears to be willing to return to its previous “zero problems with neighbours” foreign policy after the country also normalised relations with Russia. Relations were damaged after Turkey shot down a Russian jet in November last year.

Earlier this month, President Recep Tayyip Erdogan made his first trip abroad since the coup bid, meeting his Russian counterpart, Vladimir Putin, for the first time since 2015.