Turkey to free 38,000 from prison to make room for coup accused 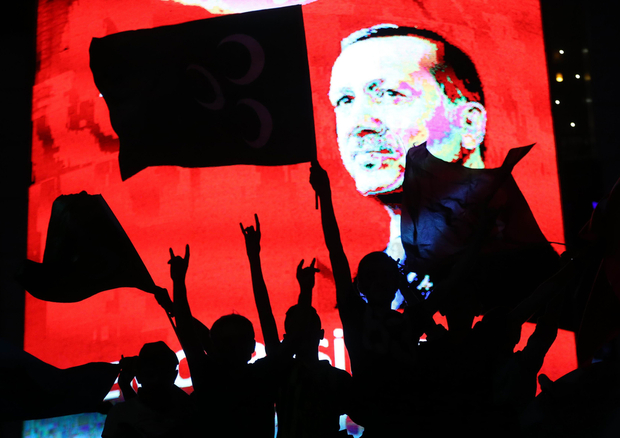 Supporters stands in front of a screen of a portrait of Turkish President Recep Tayyip Erdogan (AFP)
Turkey will grant early release to 38,000 prisoners who committed crimes before 1 July, the government said on Wednesday, amid reports of prison overcrowding after the failed coup.

Justice Minister Bekir Bozdag said in a series of messages on Twitter that the move was “not an amnesty” and the convicts were not being pardoned but released on parole.

All 38,000 will be released on Wednesday afternoon, according to reports in Turkey.

The releases will not apply to those guilty of murder, terrorism or state security crimes, or the thousands jailed after the putsch which took place on 15 July.

“As a result of this regulation, approximately 38,000 people will be released from closed and open prisons at the first stage.”

The timing means that it is impossible that anyone arrested for complicity in the coup can be released as part of the mass parole move.

There have been reports in Turkish media that jails in the country were suffering severe overcrowding due to the influx of tens of thousands of prisoners in the wake of the failed 15 July coup.

According to Turkish officials, over 35,000 people have been detained since the coup attempt, although almost 11,600 of them have since been released.

It is likely that releasing convicts not linked to the coup will make room for the alleged coup plotters who still face trials and heavy jail sentences.

Bozdag, however, did not outline his reasoning for the move.

Meanwhile, on Wednesday, Turkey issued two new decrees that expanded the power of the government and sacked thousands of police officers.

The first decree declared that the Army Chief of Staff can now be chosen from outside the military. Candidates are no longer required to come from land, air and naval forces. The position can be filled by candidates from a wider array of positions within the state.

Turkish President Recep Tayyip Erdogan said that around 80,000 people had been terminated from their employment after the failed coup attempt that took place in July.

This article is available in French on Middle East Eye French edition.