Friends say Mohammed Sankari, whose body was so mutilated he could only be identified by his clothes, had complained to police of threats 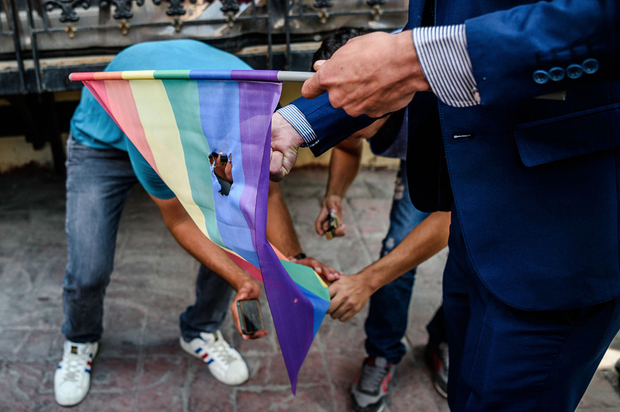 The body of a gay Syrian refugee was found mutilated and beheaded two days after he disappeared in central Istanbul, a local rights group has said.

His killing has not been widely reported in Turkish media, other than in a handful of leftist publications citing Kaos GL. There has so far been no official confirmation he was killed for being gay.

His body was found mutilated and decapitated on 25 July, two days after he disappeared, the association said.

Sankari, a poet who ran the Facebook page “Poetry is My Goal,” arrived in Istanbul a year ago after fleeing Syria’s civil war, but had wanted to leave Turkey because he feared for his life.

The last poem published by Sankari, shared on 1 April, spoke of his wish to “bury my heart in a graveyard called The Cemetery of Forgetfulness,” and the hope that his wounds would eventually be healed.

He had previously been threatened by male gangs carrying knives who said they wanted to rape him, friends told Kaos GL.

Following his earlier abduction, Sankari had made a complaint to the police, friends claimed, but “nothing happened”. 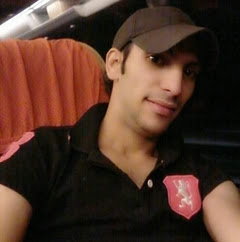 Sankari is shown in a picture uploaded to Facebook by friends (Facebook)
Friends who went to identify him following the second, fatal, attack, told Kaos GL that his body was so mutilated that he was recognisable only by his clothes.

“They cut Wisam violently. It was so violent that two knives had broken inside of him. They beheaded him. His upper body was beyond recognition, his internal organs were out. We recognised our friend from his trousers.”

The Syrian had also been kidnapped and raped five months before his death, one of his housemates told the rights organisation.

“They took him by car to a forest where they beat and raped him,” the refugee’s housemate, Rayan, said.

He added that they had previously been forced to leave a house because they were gay, Kaos GL said.

There have as yet been no arrests, the group reported.

Friend’s expressed their condolences on Sankari’s Facebook page, writing that the loss of the young poet in his early thirties was “like losing a brother”.

Other members of the LGBT community in Turkey who knew Sankari say they have been left in fear, with little protection from either the Turkish government or international aid organisations.

Homosexuality has been legal in Turkey since 1923, having also been legal under the Ottoman Empire from the mid-nineteenth century.

But members of the LGBT community in Turkey regularly complain of harassment and abuse in a largely conservative society where open displays of same-sex love are strongly frowned upon.

The authorities in Istanbul in June banned the annual gay pride march for the second year in a row, citing security and public order fears.

Turkish police have not commented on Sankari’s death. 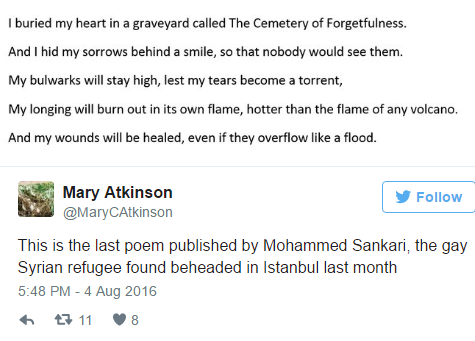